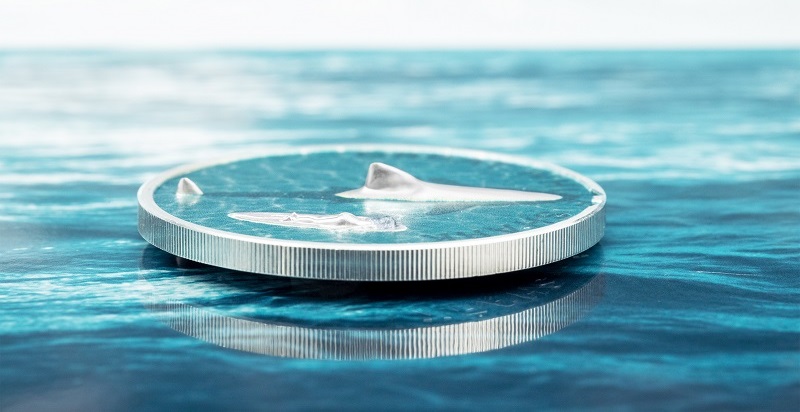 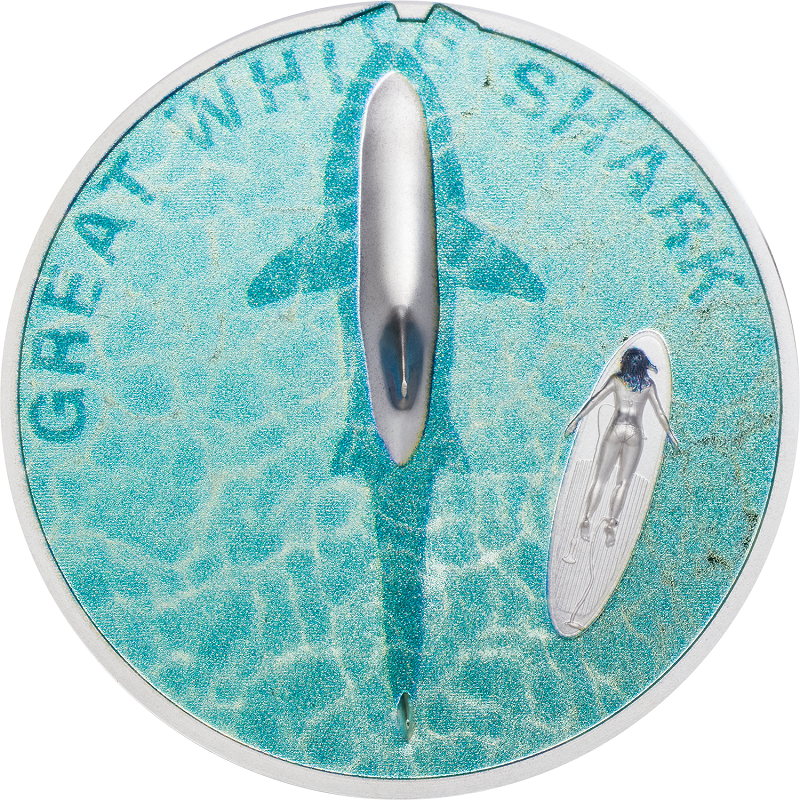 One side depicts on the center line a great white shark, whose back comes out of the water showing the characteristic triangular fin and the tip of the tail fin; to its right, a woman sunbathes on a surfboard; color was applied to the field imitating the water’s surface shimmering in the sun; the shark’s dark outline contrasts with it. Above, in the same dark color is the legend GREAT WHITE SHARK. 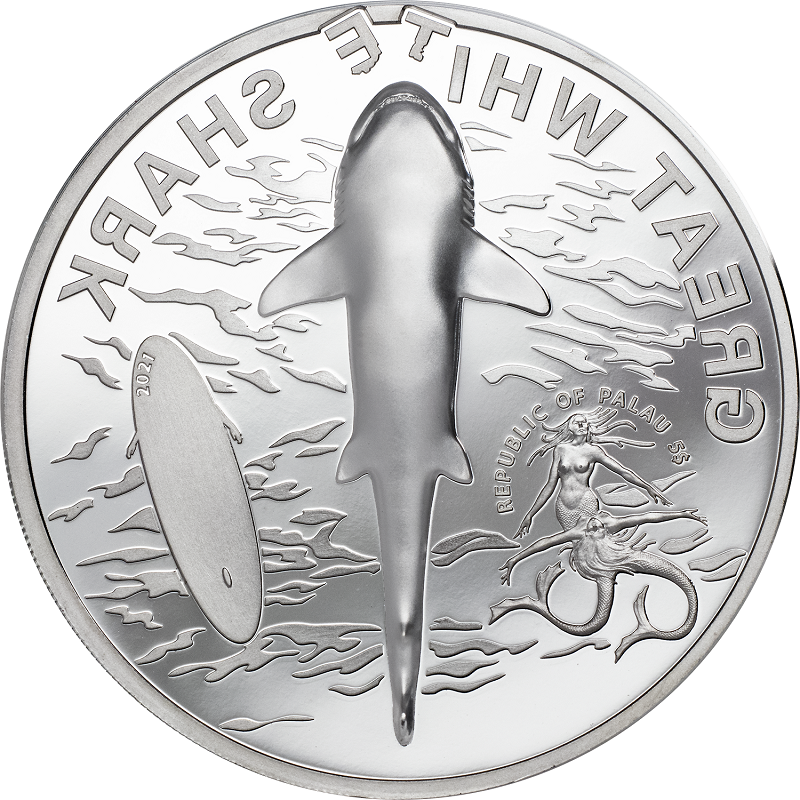 The other side features the same scene from the perspective of the bottom of the sea; the inscription is mirror-inverted; the coat of arms of Palau with the legend REPUBLIC OF PALAU 5 $ is designed as a depiction of two mermaids playing in the water; on the surfboard is the year 2021. 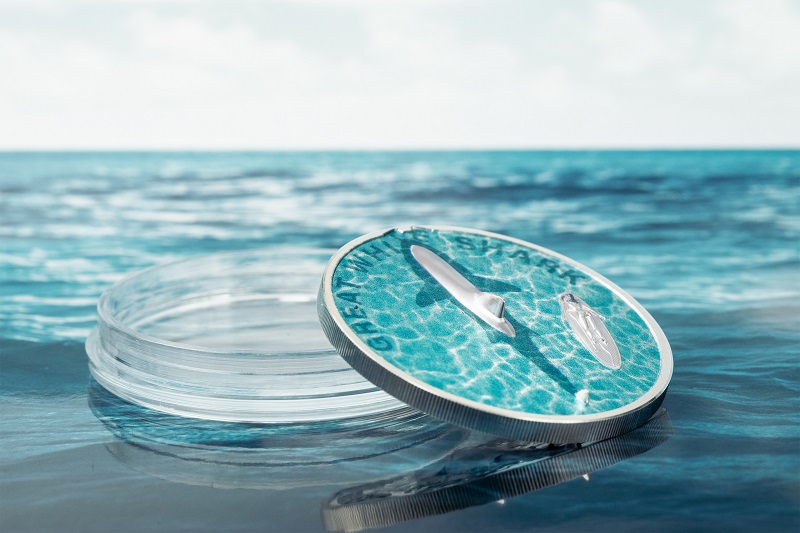 Great White Shark is a visual highlight of CIT Coin Invest’s summer launch. With Great White Shark, the forge of ideas from Liechtenstein shows what is possible with advanced smartminting technology. The iconic scene reminiscent of the aesthetics of Steven Spielberg’s famous movie was transformed into a three-dimensional depiction on the coin by means of advanced smartminting technology. Both the breathtaking, off-center relief and the applied color, which captures the reflections of the sea’s shimmering surface in a naturalistic way onto the coin, are technological highlights.

If you were 16 years old in 1975, you certainly remember Jaws, the first blockbuster created by Steven Spielberg. The film was more than a story about a man-eating sea monster, it was also a saga about the failure of politicians, who put human lives at risk for the benefit of the economic interests of a booming tourist region. Steven Spielberg’s Jaws made film history. The film, which was awarded with three Oscars, heralded the era of animal horror movies and of summer blockbusters. The water shots were considered revolutionary at the time. Today, Jaws is regarded by critics worldwide as one of the most important films in the history of film.

However, Jaws is also a prime example for the impact films can have on how we perceive reality. Peter Benchley, the author of the book Jaws was based on, repeatedly stated that he would never have written the novel if he had known how much fear of sharks it would generate. Today we know that sharks aren’t man-eaters but wonderful creatures. Great White Shark by CIT Coin Invest lays emphasis on showing both sides: The big shark next to a small person can be perceived as a threat or as an example of peaceful co-existence. 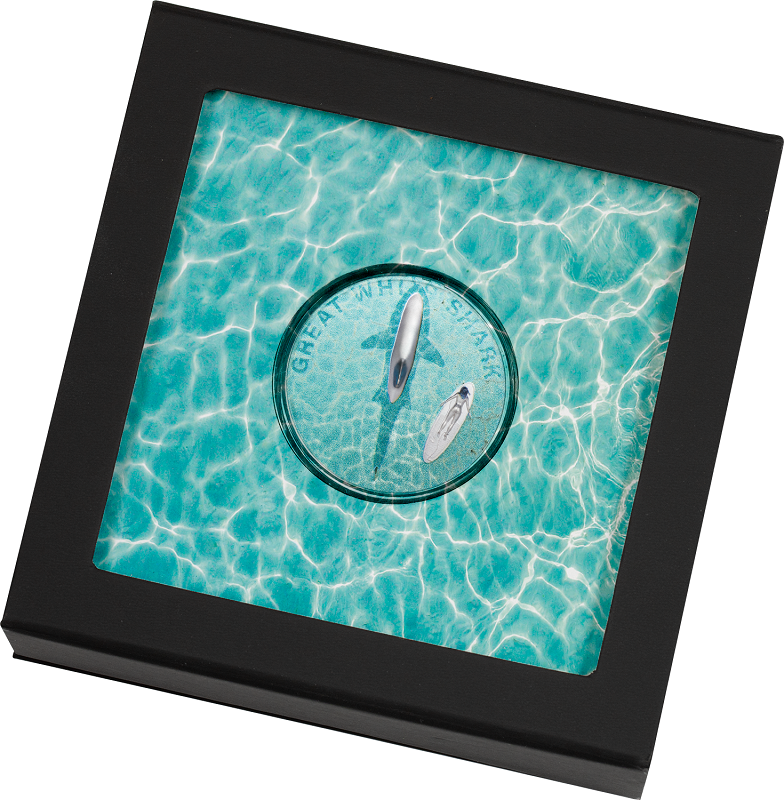 Further information about the coin is available here.