As we have seen by now, 1936 was a year in which quite a few commemorative coins were produced and sold to the collecting public. As we have also seen, some of the commemorations were rather obscure at the minimum, and the next coin discussed in this series falls into this category. The 1936 Cincinnati Music Center Half Dollar was meant to commemorate the 50th anniversary of Cincinnati as the center of music in America. Yet, there were no local festivities to celebrate this, and there really wasn’t anything to celebrate.

Thomas G. Melish, an entrepreneur and ANA member, had devised the coin and did everything in his power to create a rarity on which he could personally cash in on. The result was a coin that was distributed in limited numbers, with the portrait of a person only remotely related to Cincinnati, and a commemoration that didn’t really exist. The commemorative boom of the mid 1930s had reached another low-point with the abuse of collectors through this issue. Three coins had to be purchased, struck at the Philadelphia, Denver and San Francisco mints in relatively low numbers, in order to keep their commemorative sets complete.

Despite the fact that there was not really an anniversary to celebrate in 1936 (1886 did not have any special musical events held in Cincinnati) Congress passed an act on March 31, 1936 authorizing the issue of commemorative coins. The act called for a total of 15,000 silver 50-cent pieces to celebrate “the fiftieth anniversary of Cincinnati, Ohio, as a center of music, and its contribution to the art of music for the past fifty years”. The coins were to be issued by the Cincinnati Musical Center Commemorative Coin Association, which, not surprisingly, was led by Thomas G. Melish. The coins were sold in three-piece sets (with one coin each from the Philadelphia, Denver and San Francisco Mints) at a price of $7.75 per set. 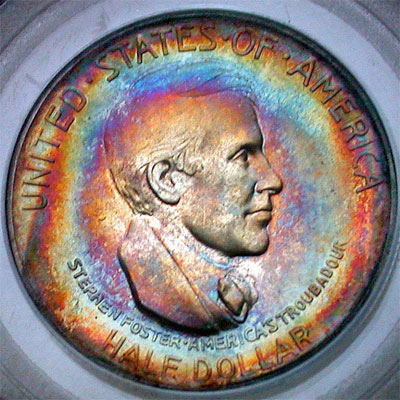 Constance Ortmayer, a relatively unknown American artist who worked for the Section of Painting and Sculpture and would later become professor of sculptor at Rollins College in 1947, designed the 1936 Cincinnati Music Center commemorative. Even though she is said to have designed a number of medals for the college, she had not designed any other numismatic items, and the commemorative is her only work known to a large (numismatic) public. The obverse features a bust of Stephen Foster, facing right. Along the top is UNITED·STATES·OF·AMERICA. Below the bust, in a curved fashion, is STEPHEN FOSTER·AMERICA’S TROUBADOUR. Along the bottom rim is the denomination, HALF DOLLAR. 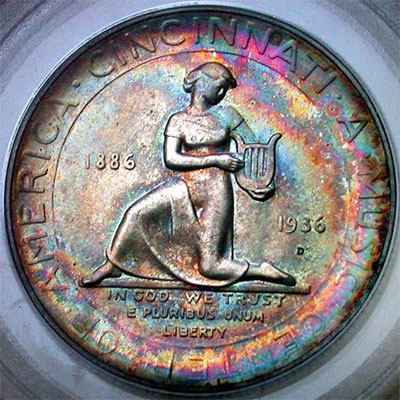 The reverse features a female figure representing music. She is on one knee, playing a lyre while looking backwards. Next to her are the dual dates (of no significance) 1886 and 1936. Below the figure are the inscriptions (from top to bottom) IN GOD WE TRUST / E PLURIBUS UNUM / LIBERTY. The whole scene is enclosed by a circle. Between the circle and the rim is (starting at approximately 11 o’clock) CINCINNATI·A·MUSIC·CENTER·OF·AMERICA·, encircling the entire reverse. The mintmark for the Denver and San Francisco issues is found below the 1936 date. As usual coins struck at the Philadelphia Mint do not carry a mintmark.

Stephen Foster was a very unusual choice to be portrayed on a coin supposedly meant to celebrate the musical history of Cincinnati, Ohio. Despite the fact that Foster had lived briefly in the city in the late 1840s, working as an administrative clerk for his brother’s firm, his most famous compositions were written elsewhere, in particularly Pennsylvania, where he had been born and where he lived during the most important part of his career. His most famous songs were written there, including “My Old Kentucky Home”, which is perhaps his most important song. It has served as the official state song of Kentucky, the official song of the Kentucky Derby, and an important song performed at many events held in the state. Other famous songs Foster include “Hard Times Come Again No More”, “Jeannie with the Light Brown Hair”, “Oh! Susanna” and “Old Folks at Home”. Despite his success in the antebellum years Foster would die young, in 1864 at age 37, after having been struck by a persistent fever, perhaps worsened by the fact that the quality of his writing had diminished in the early war years, his wife and children had left him, and he had become impoverished while living in a hotel in New York City.

As previously mentioned, the legislation authorizing this issue called for a total of 15,000 coins to be struck. Initially Melish had sought to have the mintage divided up differently, with 10,000 coins struck at the Philadelphia Mint, 2,000 at the Denver Mint, and 3,000 at the San Francisco Mint, but this was not approved, and each Mint struck 5,000 pieces. The coins were only available in sets, although over the years the majority of sets have been broken up, and finding intact sets is extremely difficult.

Of the three Mints, the Denver issue is the most available in MS-65 (gem) condition, followed by the Philadelphia issue and finally by the San Francisco, which is notoriously difficult to find in gem. In higher grades, MS-66 or better, the San Francisco Mint is virtually impossible to acquire, although for type coin purposes the Denver Mint issue is occasionally found in MS-66 and MS-67 condition. This does not apply to the Philadelphia issue, which is not quite as difficult at this grade level but is definitely not easy to find either.

Collectors pursuing this issue with untoned surfaces should not have much problem locating an example of this issue, as the majority of examples in the marketplace will feature a relative lack of color paired with satiny luster. In fact, this is one of the issues that is virtually impossible to find with so-called rainbow toning, although a very limited number of pieces show peripheral toning in different shades of orange and green. Collectors looking for appealing, fully toned and original pieces will learn however, that such a coin might not exist.