I had been watching the price of silver drop like a rock, after the “Plan B” fiscal cliff bill was announced by House Majority Leader Boehner on Sunday. So, on Friday, when it dropped below $30 an ounce, I decided to act, and set out to purchase a 10-ounce bar from APMEX… only to realize that it would put a squeeze on the family budget. So, I turned my attention to craigslist, where I found this listing:

I am looking for some holiday cash so I would like to sell off my small silver coin collection. I have:
14 Washington quarters
1 Kennedy half dollar 8 Franklin half dollars 9 Walking Liberty half dollars 1 Barber half dollar 1 Morgan silver dollar
All are 1964 or earlier dates.

I did a rough calculation of the melt value, as not all of the coins’ dates were visible and the conditions were varied, and came up with a reasonable offer, which the seller accepted. 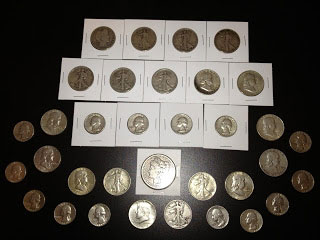 I met him at the arranged time. I inspected the coins, he confirmed the payment, and we went our separate ways. Once I got home, I pulled up my coin collection files, and started determining which I needed for my collection, and which were destined for the “junk silver” box.  Here are the coins:

I was pleasantly surprised that they filled so many holes:

The Morgan dollar turned out to be a well-worn 1897, which I will save from the “junk silver” box, but the other 10 halves and 8 quarters were not. Considering I purchased them at their metal price (thanks to coinflation.com), I feel that everybody got what they wanted.