The 2010 Chinese Gold and Silver Pandas have been issued by the People’s Bank of China. This year’s program consists of ten different issues, including seven gold and three silver coins with a new reverse design. The high quality bullion coins have become popular around the world. 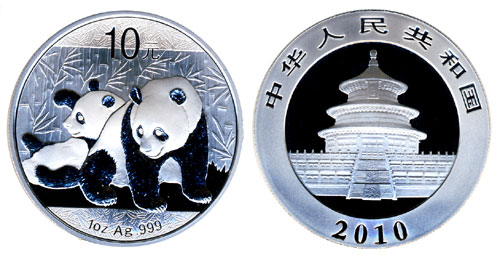 The Gold and Silver Pandas feature a common obverse design depicting the Hall of Prayer for Good Harvests of the Temple of Heaven located in Beijing, China. An inscription in Chinese indicates “People’s Republic of China” along with the year “2010”.

The new reverse design for 2010-dated coins features two pandas at play. The face value of the coin, bullion weight, and purity also appear. Each year, the coins have featured a different Panda themed design. All coins have a purity of 99.9% fine gold or 99.9% fine silver.

This year’s Gold Panda coins will be available in weights ranging from 1/20 oz to 5 oz. Each weight carries a different fave value and has a stated maximum mintage. The details of each coin are below:

This year’s Silver Panda coins will be available in three different weights from 1 oz to 1 kg. Each coin carries a different face value and has a stated maximum mintage as included below:

The 2010 Gold and Silver Pandas were first issued by the People’s Bank of China on November 30, 2009. The coins are minted by the Shenzhen Guobao Mint, Shenyang Mint and Shanghai Mint, and solely distributed by China Gold Coin Incorporation.