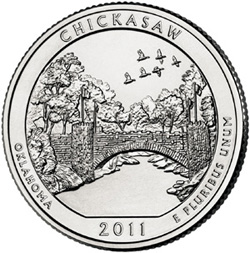 The location of the official launch ceremony for the Chickasaw National Recreation Area Quarter has been changed.

The ceremony will be held on Wednesday, November 16, 2011 at 11:00 AM CT. The new location for the event will be Vendome Well (on Broadway across from City Hall) Flower Park on the grounds of Chickasaw National Recreation Area in Sulphur Oklahoma.

The evening before on November 15, 2011 at 7:00 PM, the United States Mint will host a coin forum. The location will be Travertine Nature Center Auditorium at Chickasaw National Recreation Area.

Previous launch ceremonies for coins of the America the Beautiful Quarters Program have been attended by representatives from both the United States Mint and National Park Service. The events are open to the public and typically are followed by a coin exchange, where attendees can exchange currency for rolls of the newly launched coins at face value. Children aged 18 and younger are usually given a free coin to commemorate the event.

The reverse of the Chickasaw National Recreation Area Quarter depicts Lincoln Bridge, which was dedicated in 1909 to celebrate the centennial of President Abraham Lincoln’s birth. The reverse was designed by Donna Weaver and sculpted by Jim Licaretz. The obverse of the coin features of  portrait of George Washington by John Flanagan.

America the Beautiful Quarters feature a National Park or national site from each of the 50 states, 5 U.S. territories, and the District of Columbia. The coins are issued at a rate of five different designs per year (with a single design in the final year) with the locations presented in the order federally designated.