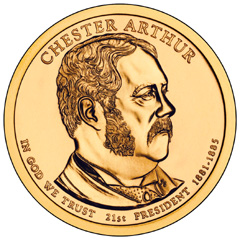 On December 13, 2011, the Treasury Department announced that the production of Presidential Dollars for circulation would be suspended. The United States Mint would continue to produce only a limited number of coins for subsequent releases of the series in order to satisfy demand from collectors. The release date of the first Presidential $1 coin produced under these new circumstances still remains unknown.

Prior to the announcement of the suspension, a circulation release date of February 16, 2012 had been established for the Chester Arthur Presidential Dollar. This would have been the release date if the coin had been distributed in the same manner as previous issues. The first twenty coins in the series had been shipped to Federal Reserve Banks, who made the coins available in unmixed quantities to depository institutions during a specified introductory period. Thus, members of the public were able to obtain each new release from banks at face value.

Following the suspension, new releases for the series will no longer be distributed through the Federal Reserve system. Rather, the coins are expected to only be available directly from the United States Mint. Based on information available so far, it is expected that the US Mint will offer 25-coin rolls priced at $32.95; 100-coin bags priced at $111.95; 250-coin boxes priced at $275.95; and 500-coin boxes priced at $550.95. Shipping and handling charges would also apply.

Presidential Dollars will still be available from banks at face value to meet the demand from circulation, however, only the older releases will be available. The Federal Reserve Banks will fulfill circulation demand from an existing stockpile of approximately 1.4 billion $1 coins held in storage.

The United States Mint has not yet announced the date for the start of sales of the Chester Arthur Presidential Dollars. Michael White of the United States Mint Office of Public Affairs stated, “We anticipate the first 2012 $1 Coin products to be available within the next several weeks.”

Based on available coin production information, the US Mint facilities at Philadelphia and Denver have already struck 1.68 million of the Chester Arthur Presidential Dollars during January 2012. No explanation for the apparent delay in making these coins available for sale to the public has been provided.