On November 29, 2011, Rep. Jerrold Nadler introduced a bill in the House of Representative which seeks to amend the distribution of surcharges for the 2009 Abraham Lincoln Silver Dollars. 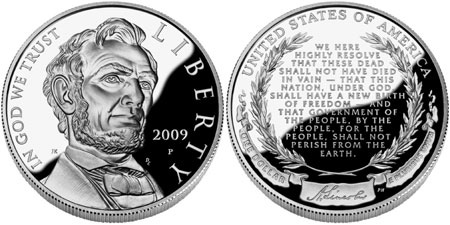 The commemorative coins were issued to celebrate the bicentennial of the birth of Abraham Lincoln. The obverse design featured a portrait of the President inspired by the Daniel Chester French sculpture which resides at the Lincoln Memorial in Washington, D.C. The reverse design featured the final 43 words Lincoln’s Gettysburg Address. The issue had proven popular with collectors and sold out of the maximum mintage of 500,000.

The price charged for each coin by the United States Mint included a surcharge of $10, yielding maximum total surcharges of $5 million. Originally, under Public Law 109-285, all surcharges were to be distributed to the Abraham Lincoln Bicentennial Commission to further the work of the Commission.

The bill H.R. 3512 seeks amend the distribution so that the first $2 million is distributed to the Abraham Lincoln Bicentennial foundation and any funds in excess are paid in equal amounts to the following:

The bill was referred to the Committee on Financial Services, who have ordered the bill to be reported by voice vote.