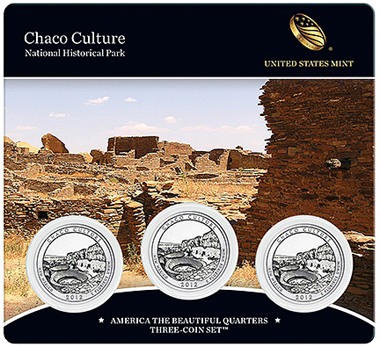 Chaco Culture National Historical Park in New Mexico includes Chaco Canyon, which was a thriving hub of ceremony, trade, and administration for the ancestral Puebloans from A.D. 850 to 1250. The reverse design of the Chaco Culture Quarter illustrates a view to the west of two elevated kivas that are part of the Chetro Ketl Complex, the north wall of Chetro Ketl and the north wall of the canyon.

The 2012 Chaco Culture Quarter Three Coin Sets are priced at $9.95 each. There are no maximum product limits or household ordering limits imposed.

Other three coin sets featuring the previous releases of the America the Beautiful Quarters Program also remain available for sale on the US Mint’s website. These products may be purchased online at http://catalog.usmint.gov/