Chaco Culture National Historic Park, located in northwestern New Mexico, was host to the densest concentration of pueblos in the American Southwest, and was a major center of culture between AD 900 and 1150, ending as a fifty-year drought set into the area. Archaeological expeditions from the 1890’s to the 1920’s discovered various technological developments, including prehistoric dams and irrigation systems, as well as road segments and stairways. 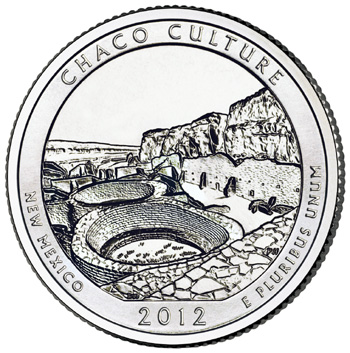 The Chaco Culture National Historic Park Quarter depicts a view to the west of two elevated kivas and the north wall of the Chetro Ketl, as well as the north wall of the canyon. Also included in the design are the incused phrases “Chaco Culture”, “New Mexico”, and “E Pluribus Unum”, as well as the date of issue. The coin will represent the second issue of the United States Mint’s America the Beautiful Quarters Program for 2012, and the twelfth issue for the series overall.

A circulation release date of April 2, 2012 has been indicated by Federal Reserve Banks Services. On this date, the coins should be released through the channels of circulation, although the low preliminary mintage might keep the coins from widespread distribution. The United States Mint will sell circulating quality coins in rolls and bags also beginning on April 2, 2012. An official launch ceremony for the quarter has not yet been announced.

The Chaco Culture National Historic Park Quarter will be or is already available from the U.S. Mint in the following products: