The First Spouse Gold Coin Program was authorized under Public Law 109-145 to honor the spouses of the Presidents of the United States of America in the order served. The obverse design of each coin is to carry a portrait of the spouse honored, while the reverse is to contain images emblematic of the spouse’s life and work. The coins scheduled for release in 2015 and 2016 will represent the ninth and tenth years of the program.

The same set of design candidates were also reviewed by the Citizens Coinage Advisory Committee (CCAC) at a separate meeting. Coverage of the meeting and the Committee’s recommendations can be found here.

After the CFA and CCAC make their recommendations, the Secretary of the Treasury has the authority to select the final designs for the coins. 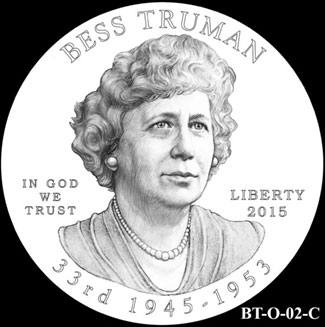 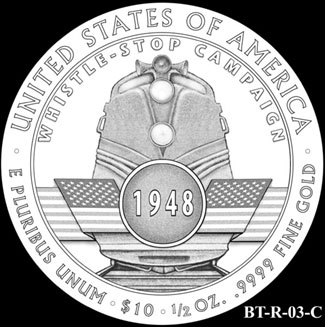 For the Bess Truman First Spouse Gold Coin, the CFA recommended obverse alternative #2 as the most dignified portrait. For the reverse of the coin, they supported the theme of the whistle-stop campaign provided it could be depicted clearly. They commented that a simplified version of reverse alternative #3 could be the most satisfactory if the foreground banners were removed. The design candidate depicts an engine reminiscent of the 1940’s locomotives that would have carried the presidential train car Bess Truman rode on during the campaign tour. The design was stylized to suggest a vintage railroad poster. 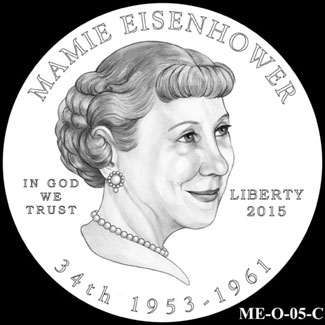 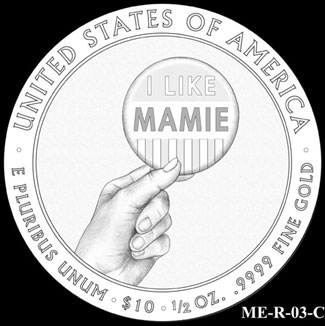 For the next coin in the series honoring Mamie Eisenhower, the CFA recommended obverse alternative #5 as the best likeness and a pleasing portrait. For the reverse, they recommended alternative #3 as a simple design that refers to her involvement in presidential campaigns. The design shows a hand holding an “I Like Mamie” button. During her husband’s presidential campaign, she had become so popular with the public that such buttons began to appear mimicking the “I Like Ike” buttons. 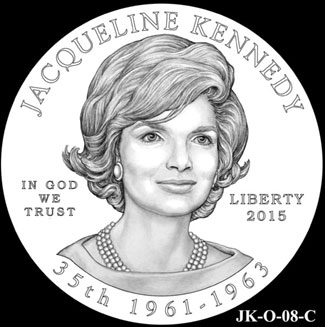 The CFA recommended obverse alternative #8 for the Jacqueline Kennedy First Spouse Gold Coin, commenting that most of the other alternatives inadequately captured her appearance. 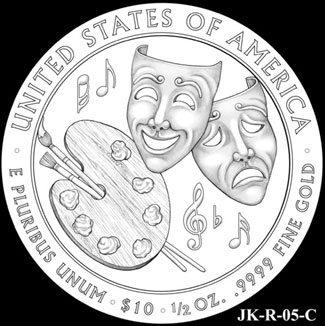 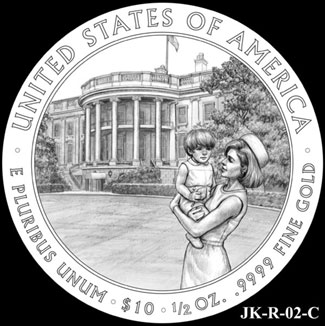 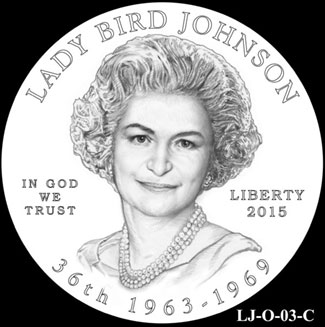 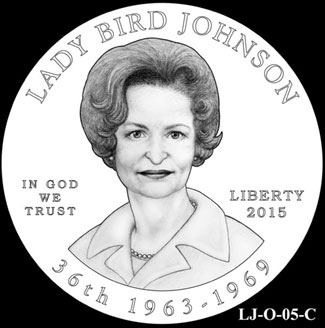 For the Lady Bird Johnson First Spouse Gold Coin, the CFA drew their recommendations from two candidates. They recommended the portrait of Mrs. Johnson from alternative #3, but with a more characteristic depiction of her hair as shown in alternative #5. 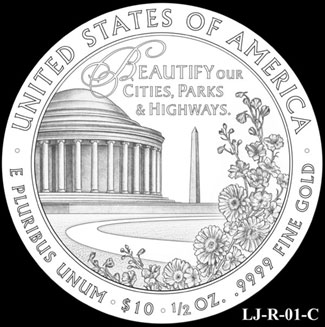 To appear as the reverse design of the Lady Bird Johnson coin, the CFA recommended alternative #1 with the suggestion to reduce the size of the Jefferson Memorial to give increased prominence to the text, which reads “Beautify our cities, parks & highways.” The design represents Mrs. Johnson’s beautification efforts in Washington, D.C. which set an example for other American cities. 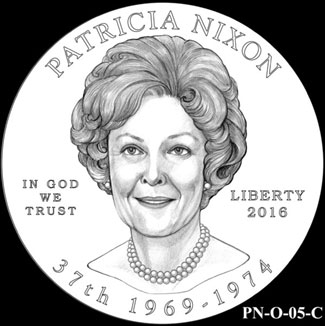 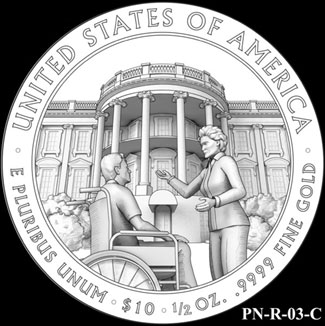 Moving on to the final year of scheduled releases for the program, the CFA recommended obverse alternative #5 for the Patricia Nixon First Spouse Gold Coin. For the reverse, the Commission recommended alternative #3 as potentially the best candidate, if refined. They cited the area across the mid-ground of the design as “a confusing and poorly rendered combination of design elements,” citing the White House awning and figure of Mrs. Nixon. The design shows the First Lady welcoming a person in a wheelchair to the White House, symbolizing her efforts to make the building more accessible to all. 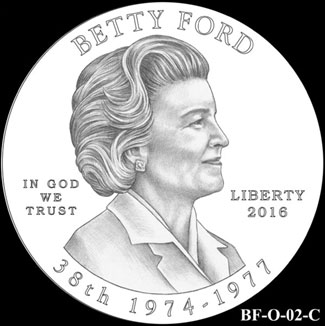 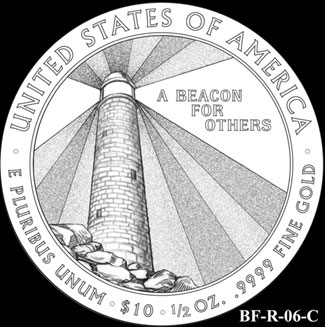 For the Betty Ford First Spouse Gold Coin, the Commission recommended obverse alternative #2 as the best portrait. They commented that her appearance is less recognizable in several other alternatives. For the reverse, the CFA recommended alternative #6 with the suggestion that the inscription “A Beacon for Others” be changed to “Shedding Light” as shown in another alternative. The design and inscription represent Mrs. Ford as a beacon of openness and honesty for all. She was an activist for improving the nation’s attitude and education regarding treatment for chemical dependency, breast cancer, and equal rights.