During a meeting held last month, the Commission of Fine Arts (CFA) reviewed design candidates provided by the United States Mint for the 2016 America the Beautiful Quarters. This will represent the seventh year of the program which features rotating reverse designs depicting a national park or site from each state, territory, and the District of Columbia in the order federally designated.

Following the CFA meeting, the Citizens Coinage Advisory Committee (CCAC) also held a meeting to review the candidates and provide their recommendations. Full coverage of the CCAC meeting can be found here. 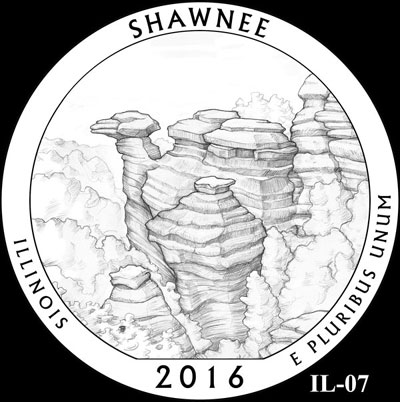 For the Shawnee National Forest Quarter, the CFA recommended alternative #7 featuring a depiction of Camel Rock showing the full shape of the formation. The recommendation was consistent with the preference of the site liaison.

During their subsequent review, the CCAC had recommended another candidate featuring a different view of the landmark with a red-tail hawk circling overhead. 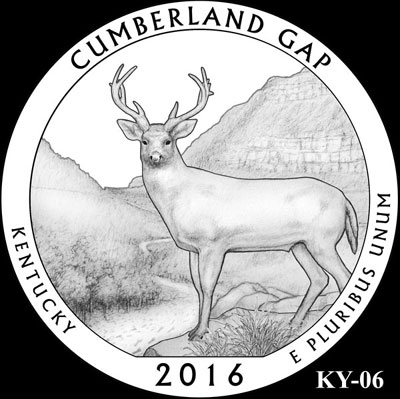 During the meeting of the CCAC, the challenges of the anatomy of a deer were cited with various members calling out issues in the presentation. The CCAC had ultimately recommended design alternative #2 featuring a frontiersman gazing across the mountains to the West. 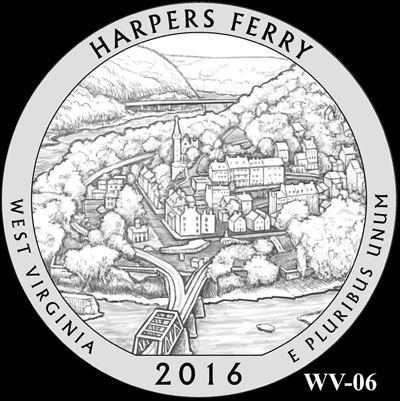 For the Harpers Ferry National Historical Park Quarter, the CFA had offered their recommendation for alternative #6 featuring an overview of Harpers Ferry as the most recognizable choice. The image includes the historic iron bridge crossing the Potomac River and the confluence of the Potomac with the Shenandoah rivers. Members did comment that the legibility of the aerial view may not be satisfactory at the scale of the coin.

During their subsequent meeting, members of the CCAC did not give much support to alternative #6 citing its appearance at the scale of the coin. Instead, the CCAC recommended alternative #7 which featured a depiction of John Brown’s Fort, the site of John Brown’s last stand during his raid on the Armory. 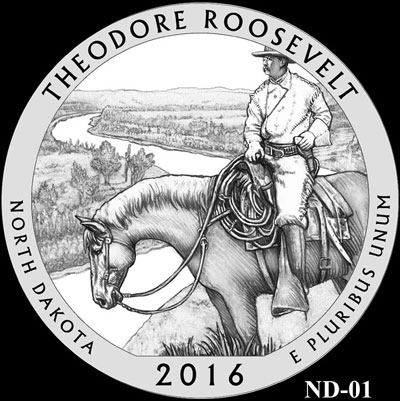 The site liaison and the CCAC had offered the same recommendation. The CCAC made a suggestion to move Roosevelt’s head away from the rim at the discretion of the art department. For the 2016-dated quarters, this represented the only instance where the CFA and CCAC recommended the same design. The CFA recommended alternative #5 for the Fort Moultrie National Monument Quarter, citing its clear and simple composition. The design shows Sergeant Jasper clasping the Regimental Flag as cannon fire from British ships flies through the air and explodes around him.

During their meeting, a member of the CCAC had mentioned that the upward angle of this design made the head look too small. Another member mentioned the intact appearance of the flag compared to other design candidates, which portrayed a flag ragged from battle.  The CCAC made their recommendation for alternative #6, which portrayed Sergeant Jasper with a more ragged flag and the British ships visible in the background.

The design selection process for the America the Beautiful Quarter calls for direction to be provided by a federal liaison to each site and recommendations to be offered by the Commission of Fine Arts, the Citizens Coinage Advisory Committee, the Secretary of the Interior, and the chief executive of the host jurisdiction. The Director of the United States Mint is to weigh the input and recommendations from the various parties and make a final recommendation to the Secretary of the Treasury who has the authority to select the final designs.