For each year’s America the Beautiful Quarter designs, the US Mint generates three to five design concepts per location. These are based on source materials identified by a Federal official who serves as liaison for the national site. Final candidates are submitted to the Secretary of the Interior, the chief executive of the host jurisdiction, the Commission of Fine Arts, and the Citizens Coinage Advisory Committee for review and comment. After considering all comments and recommendations received, the Director of the US Mint makes a recommendation to the Secretary of the Treasury who will make the final design selection.

During their September 17 meeting, the Commission of Fine Arts (CFA) reviewed the design candidates for the 2010 America the Beautiful Quarters. The Commission provided some general comments about the program, such as acknowledging the challenge of depicting the vastness of some of the sites on the small scale of a quarter. In line with this observation, they recommended using familiar iconic images when possible, sometimes going beyond the source materials provided by park superintendents. The Commission further strongly recommended that the inner circle used for the template of the reverse be continuous, removing the flat segment at the bottom.

The Commission recommended alternative #2, depicting the doorway of the park’s main building from the 1930s. The Commission members commented favorably on the simplicity of this design but questioned the quality of the drawings presented, and recommended that the small National Park Service sign beside the doorway be eliminated from the design due to its illegibility at the scale of a coin. 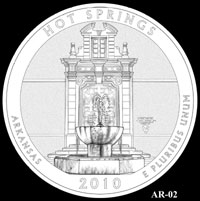 The Commission rejected all of the designs presented for their poor quality. The Commission members supported the idea of depicting Old Faithful, but suggested consideration of additional source material, such as the paintings of Thomas Moran.

The Commission recommended alternative #4 depicting the Half Dome rock formation, with the comment that the artwork appears unfinished and should be further developed. The Commission suggested that other historic sources, such as the photographs of Ansel Adams, be considered in refining this image. 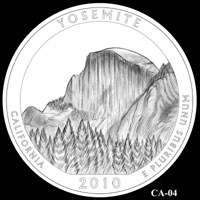 The Commission acknowledged the difficulty of distinguishing the subject from its previous depiction on the Arizona state quarter, a concern that may recur over the course of this new series. The Commission recommended alternative #1, due the depth of the perspective view, but suggested several modifications. Noting that the foreground scree is given too much dominance in the composition, the Commission members recommended shifting the strong vertical alignment at the center of the coin to the right to emphasize the deep perspective toward the left side of the composition. 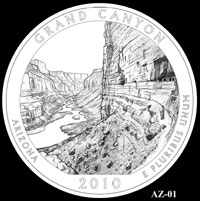 The Commission recommended alternative #3 due to its superior composition and simplicity of elements. 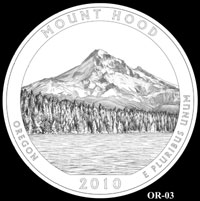