At a meeting held on September 20, 2012, the Commission of Fine Arts (CFA) reviewed design candidates provided by the United states Mint for the reverse of the 2013 Native American Dollar, which will feature the theme of the Delaware Treaty of 1778.

The Native American $1 Coin Program was authorized under Public Law 110-82 and features annually rotating reverse designs which highlight the contributions and accomplishments of Native Americans. Themes for previous years have included Agriculture with the “Three Sisters” method of planting (2009), Government with the Haudenosaunee or Iroquois Confederacy (2010), Diplomacy with the first written treaty between Native Americans and English settlers (2011), and the spread of the horse and trade routes of the 17th century (2012).

The United States Mint provided the following background for the theme of the 2013 design:

After declaring independence, the United States signed its first formal treaty with an Indian tribe, the Delaware, at Fort Pitt (now Pittsburgh, Pa.) on September 17, 1778. The mutual defense treaty allowed American troops passage through the Delaware Tribe’s land to attack the British fort at Detroit, Michigan. It recognized Delaware’s sovereignty. It also offered a significant insight into the later process of incorporating tribes into the federal system. Article VI of the treaty gave the Delaware Nation the option of joining other tribes in the Ohio region to form a state with the Delaware at the head to become part of the U.S. confederation, with representation in Congress. Although the statehood option was never taken up, it foreshadowed the later acknowledgement of tribes as partners in the federal system. 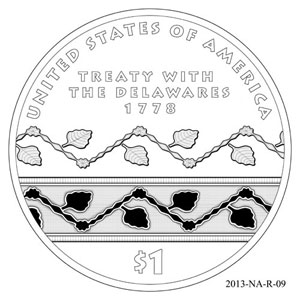 The CFA recommended design alternative #9, which features the cloth pattern worn by the Delaware tribe. The artist who prepared the design intended for the pattern to symbolically suggest forward movement after the signing of the treaty. Members of the CFA did state that the design should be “studied carefully to ensure that the proposal is an authentic and respectful use of the historical Native American artistic motif.”

With regards to the numerous alternatives which included a treaty and quill pen, the CFA commented that this treatment “would be illegible and convey little connection to Native American culture for this circulating coin.” The CFA encouraged “more creative concepts in generating design alternatives.”

In recommending alternative #9, the CFA also repeated their past suggestion to indicate the denomination as “One Dollar” rather than the text of “$1” which they referred to as “less dignified.” Additionally, they noted that the proposed typography of the dollar sign is abstracted from the standard symbol and “may be misunderstood by the public when using this coin.”

The Citizens Coinage Advisory Committee (CCAC) reviewed the same design candidates provided by the United States Mint at a meeting held on September 21, 2012. The CCAC recommended alternative #10 which features a turkey, howling wolf, and turtle, which are symbols of the clans of the Delaware Tribe. 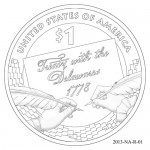 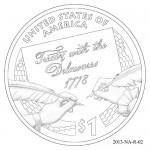 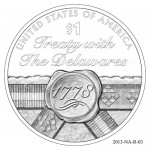 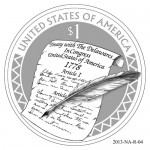 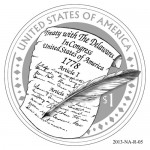 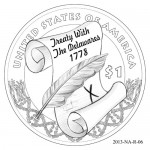 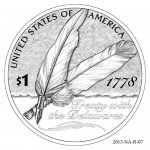 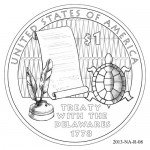 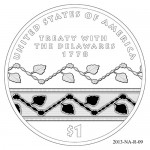 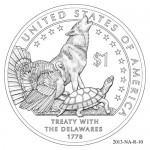 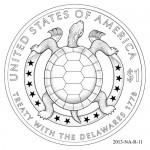 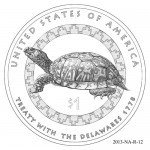 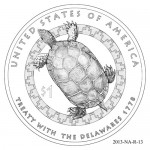