The Central Bank and Financial Services Authority of Ireland will issue a very special silver coin honoring their well known and much loved “Barnyard” series of circulating coins designed by Percy Metcalfe and first issued in 1928. This will be the first time Percy Metcalfe’s artwork will be presented in the Euro currency. 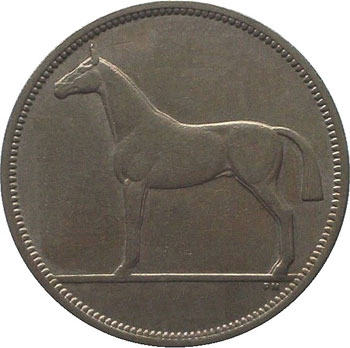 "Barnyard" Half Crown designed by Percy Metcalfe. (Image for euro coin not yet available.)

As a tribute to the first coins of the Irish state, the Central Bank has chosen to expand these designs and give them more relevancy within the EURO by updating them within a “New Generation.”

“As the Euro is still in its relative infancy, we are witness to a new generation of currency and a new era of economy for Ireland and it is the addition of this story that enables us to redesign whilst still paying homage to the premier Free State coins”.

Percy Metcalfe’s original designs are replicated and have been re-tooled and sharpened slightly for more vivid detail. The difference is with the addition of the animal’s offspring. The original coins show the animals in profile with quite basic anatomical depictions. This is still the case with the “Horse” coin for example, but now, we will see a foal casually looking towards us in a more relaxed pose.

The coins will carry a nominal value of €15 and will be struck in sterling silver to proof quality, with a diameter of 38.6 mm and weight of 28 grams. The coin will have a mintage limit of 15,000 pieces. It is expected that there will be great demand for this coin upon its release in October.

The first coin in the series will see the issue of the redesign of the Horse, with the Salmon and smolt in 2011 and the Irish Wolfhound with pup following in 2012.

For more information, please visit the website of the Central bank and Financial Services authority of Ireland at: http://centralbank.ie/

Update September 15, 2010: Images of the Barnyard “Horse” Euro Coin is shown below. 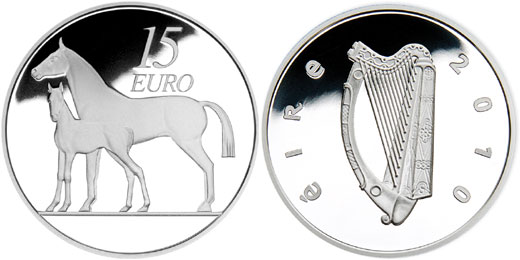