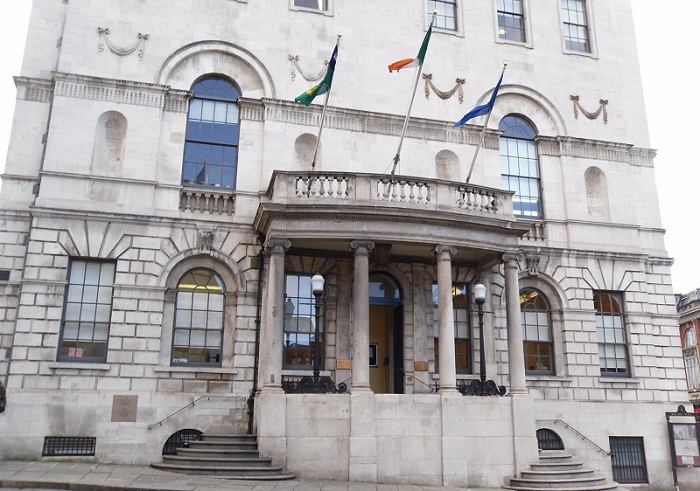 The Easter Rising of 1916 is one of the most pivotal events in modern Irish history, serving as a preamble to Ireland’s eventual independence in 1922. This year, the centennial anniversary is being celebrated nationwide; the primary celebration was held on March 27, Easter Sunday, commemorating the event which set the country firmly on the path to self-determination and the recognition of the Irish Free State.

The Free State was established in 1922 as a result of the Anglo-Irish Treaty of December 1921, ending the three-year Irish War of Independence between the forces of the self-proclaimed Irish Republic, the Irish Republican Army, and British Crown forces. However, the Easter Rising itself is considered Ireland’s own declaration of independence, which occurred the day Padraig Pearse (1879 – 1916), a former school master and political activist, stood on the steps of Dublin’s Central Post Office and read out a proclamation. The armed uprising continued into Easter Monday, April 24, 1916, and lasted for six days. Among those in support of independence were about 1,200 members of the Irish Volunteers and Irish Citizen Army who gathered at several locations in central Dublin. Included among these volunteers were members of the all-female Cumann na mBan, or the Irishwomen’s Council.

With much greater numbers and heavier weapons, the British Army suppressed the Rising. Pearse agreed to an unconditional surrender on Saturday, April 29, and he and fourteen other signatories or supporters of the proclamation were executed for treason less than a month later.

The coins, issued on the April 4, pay tribute to this historic day with a design that includes some the very words considered paramount to the proclamation. The primary focus of the coin’s design is the inclusion of the allegorical figure “Hibernia,” based on the statue which stands atop the General Post Office that served as the headquarters of the uprising’s leaders. The building was heavily damaged and almost destroyed by fire in the course of the rebellion. It was also shelled by the British admiralty gunboat, the Helga, anchored in the Liffey during the height of the fighting and not repaired until the Irish Free State government took up the task some years later. 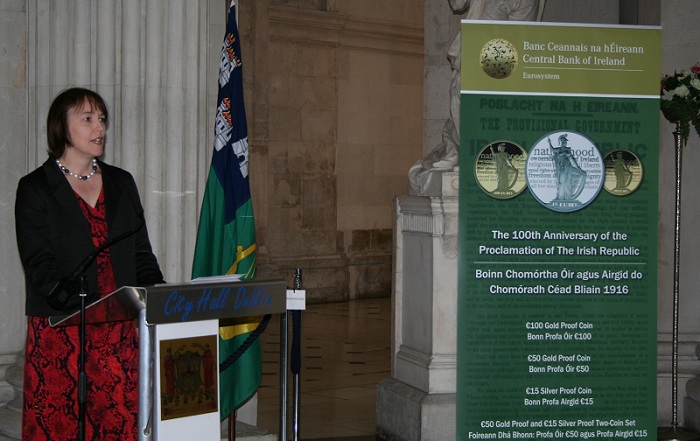 The celebration of the after-launch of the Easter Rising coins was held on April 7. The event was opened by Lucy O’Donoghue, Manager of the Central Bank’s currency issue department, who had the pleasure of introducing the Bank’s newly appointed Deputy Governor, Sharon Donnery. Ms. Donnery spoke of the significance of the coins to the centennial celebration.

Deputy Governor Donnery began by mentioning the significance of the building that hosted the evening’s event, which played a part in the Easter Rising. She commented, “City Hall is a very appropriate location to mark the release of these coins. On that fateful Easter Monday of April 24th 1916, Captain Sean Connolly led the 2nd Company of the Irish Citizen Army from Liberty Hall, and took possession of this building. Among his small garrison here were ten women fighters including the formidable Helena Molony and Dr. Kathleen Lynn.”

She then added, “Getting a coin from its conception to issue requires a significant level of planning, and initial thoughts on these coins started back in 2013. The Proclamation of the Irish Republic, which was read by Patrick Pearse outside the GPO on 24 April 1916, was chosen as the central theme for our commemorative products.” 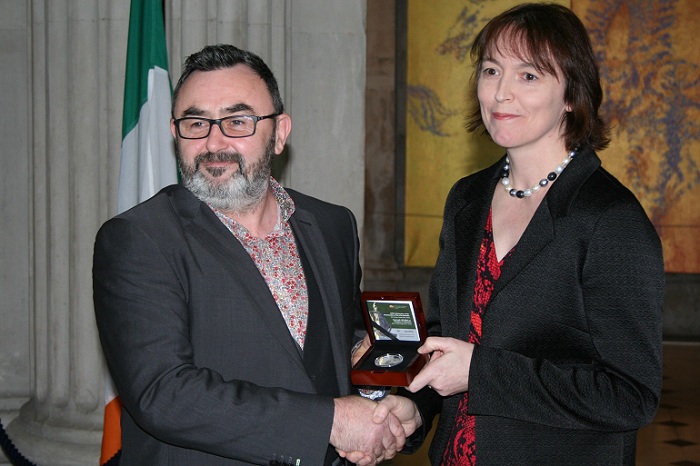 After her well-received comments, Deputy Governor Donnery then brought the coin’s designer, Michael Guilfoyle, to the podium and introduced him to invited guests. He spoke about the process of choosing the design, what his inspiration was, what he wanted to emphasize with regard to the anniversary, and the symbols he thought should be given precedence.

“The events of 1916 were hugely influential in shaping Irish history and this centenary is the perfect time to honour all those who played a part,” he said. “I therefore feel that this coin carries with it a lot of responsibility. I certainly felt the weight of responsibility when I was working on my designs.”

He continued, “The design is intended to appeal to as wide an audience as possible. It is an image of a proud Ireland with strong core values. It is also an image that will resonate with coin collectors as it recalls the famous female personifications of figures such as Marianne for France, Liberty for the USA and, of course, Britannia.”

After Guilfoyle’s comments, Deputy Governor Donnery took the opportunity to present the celebrated coin’s designer with the first strike of the silver crown coin. The coins were struck by the BH Mayer Mint in Germany to Proof quality on behalf of the Central Bank.

Senior members of the Irish Armed Forces were also in attendance for the post-launch. The Armed Forces were given pride of place during the official celebrations and parade on March 27 of this year, which was recognized as the centennial celebration for the occasion. Vice Admiral Mark Mellett, the most senior military officer of the Army, Naval Service, and Air Corps branches, was among invited guests and praised the design of the Central Bank’s newest collection of commemorative coins. 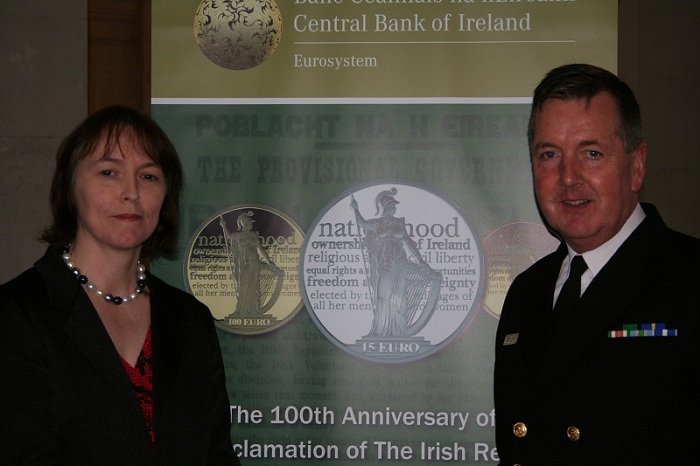 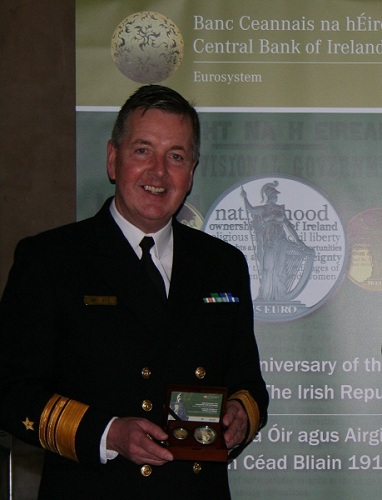 The coins themselves were made available to guests for purchase after the evening’s presentation. As the single €100 gold coin had sold out hours after their official release date on April 4,  the coin example on display was only “for show.” Reaction and comment about the collector series has been exceptionally positive, with a significant number of both the single €15 silver coin and €50 gold coin being sold in the first three days of their release. For more information on these and other coins available from the Central Bank of Ireland, please visit their Web site. International orders will be dispatched where applicable. 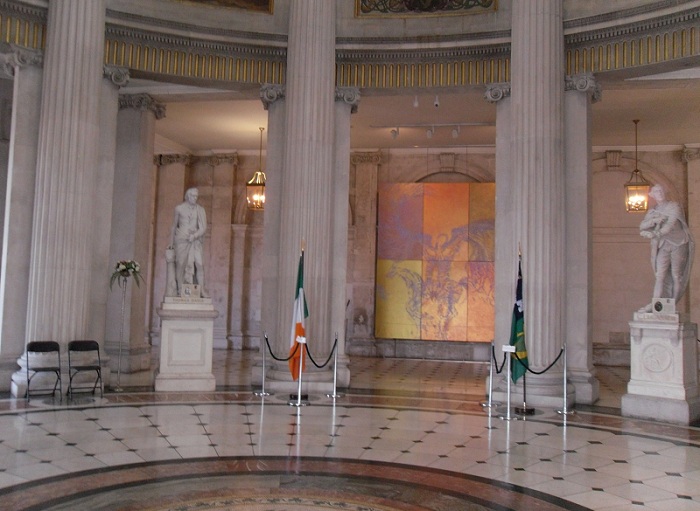 The splendor of the Dublin City Hall provided the most appropriate and historic setting for such an important event. Built between 1769 and 1779, it was originally the Royal Exchange, which provided a meeting place for Dublin’s businessmen to buy and sell goods and trade bills of exchange. 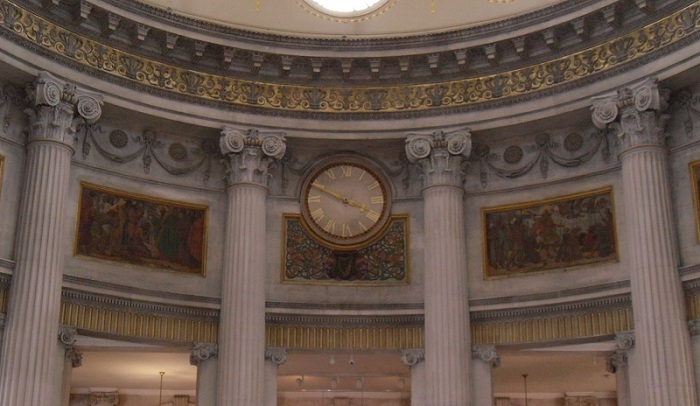 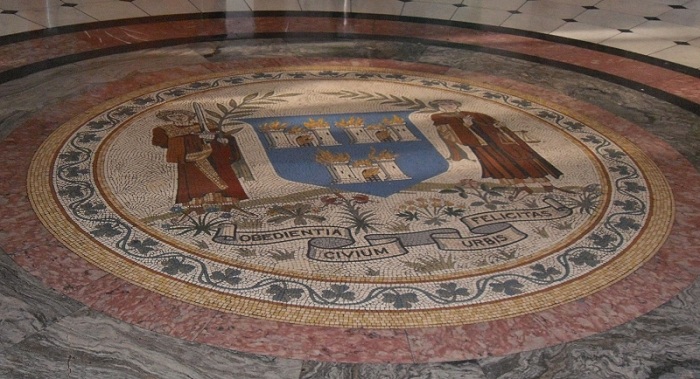 Dublin’s City Corporation bought the Royal Exchange at the beginning of the 1850s and converted it for use by city government. Partitions around the ambulatory were added as well as the construction of a new staircase from the Rotunda to the upper floors, and the sub-division of the vaults for storage. Finally, on September 30, 1852 the Royal Exchange was renamed City Hall during the first meeting of the Dublin City Council, which was held there. A beautiful series of frescoes was later added, representing the regions of Ireland; a corresponding floor mosaic showing city arms and motto was also commissioned.

Author’s note: My thanks go to the management of the collector coin department of the Central Bank of Ireland for their kind hospitality and for their assistance with this article.