On September 27, 2011, the Citizens Coinage Advisory Committee (CCAC) met in Washington, D.C. to review and discuss the obverse designs for the 2013 Presidential Dollars. These coins will continue the series honoring the former Presidents of the United States, issued at a rate of four different designs per year in the order served. 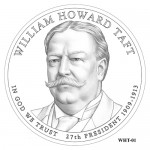 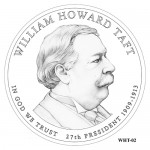 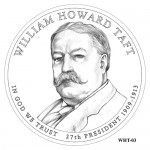 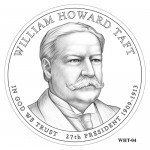 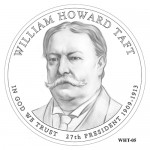 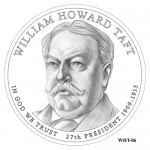 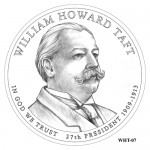 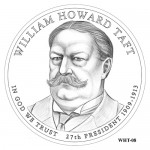 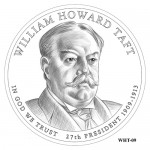 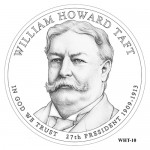 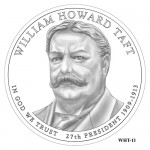 The third set of designs were for President Taft. As the committee has done previously, a hand vote was taken to see which of the 11 provided design candidates were of sufficient interest by one or more members to discuss. As a result, only designs 1, 4, 5, 6 and 10 were open for discussion. Kaarina Budow noted that the Commission of Fine Arts has recommended design 10.

Heidi Wastweet was asked to start the discussion for each set, as her trained eye as a sculptor provides the other committee members with a professional viewpoint from the aspect of going from design to actual coin. She said that she did not have a strong favorite: designs 1 and 4 were nice drawings, whereas design 5 was “lacking information for the scupltor,” and “flat.” She found design 6 to be interesting, “because it is stylized,” but thought the nose was a bit narrow. Finally, she thought the chin perspective “was a little off” on design 10.

Donald Scarinci was second, and simply stated that he felt that the CFA was “right on the money” in recommending design 10, as it presented a “more accurate presidential” view of Taft, a “big guy” before and after his term in office.

Mike Ross was third, and stated that design 4 was “too small,” design 6 made the former president appear to be “a crime boss in Boardwalk Empire,” and design 10 was better suited for a “cereal box.”

Michael Olson simply remarked how the mustache in the source materials had “more of an angle” than in design 10, and asked that the artists review the material if this design is selected.

Arthur Houghton was “left flat” by design 5, but it was better than the other images. He also pointed out that design 6 was “the splitting image” of one of the paintings from the source materials.

Chairman Gary Marks felt that the image in design 4 “just isn’t Taft,” and thought the eyes in design 5 looked “a little vacant,” whereas design 1 showed “something going on behind the eyes.”

Erik Jansen simply said that to him, it was a choice between designs 1 and 5, and that he preferred design 1, but ended with a request for his fellow members to “look at how they coin up” in the final analysis.

Dr. Michael Bugeja favorite designs were 1 and 10, but the shoulders were too narrow in design 10, but “there is some character in his eyes.”

Dr. Doreen Bolger felt that design 1 had the best combination, “capturing his appearance as a large man,” and saw a “glazed or vacant” look in the eyes of designs 5 and 10.

The committee members cast their votes as follows, with their official recommendation for design candidate 1. 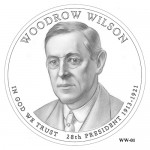 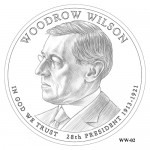 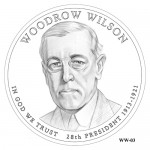 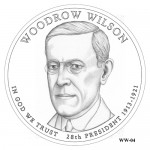 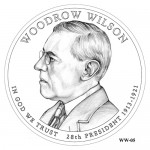 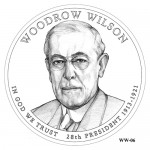 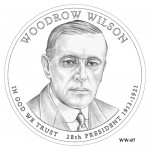 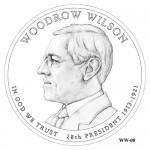 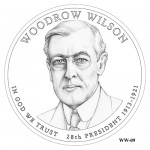 The fourth set of designs were for President Woodrow Wilson. A hand vote was taken to see which of the 9 provided designs were of sufficient interest by one or more members to discuss. As a result, only designs 1, 2, 3, 5, 6, 8 and 9 were open for discussion. Kaarina Budow noted that the Commission of Fine Arts has recommended design 2.

Heidi Wastweet provided the first observations on the designs. She didn’t like the chin on design 9: it was “too large” and the “wrong shape.” She found design 6 had a “lot of character, weathering in the face”, but did not get an “immediate likeness” from design 8. She found designs 2 and 5 to be “very similar,” preferring 2 over 5, and found “no technical problems” between designs 1, 3, and 6.

Dr Doreen Bolger liked the profile views in designs 2 and 5, and liked design 6 very much. The others did not appeal to her.

Michael Brown felt that design 6 would “coin well” and be easy to identify as Wilson. Design 1, in his opinion, looked like the president when he was “new in the office.”

Erik Jansen, much like Michael Brown before him, found design 1 to be of a “young man,” but saw a “thinking man” in design 2. He felt that design 3 would “coin up nicely,” quipping that “cubism comes to the Golden Dollar.” He saw design 5 depicting a “bewildered man, not a strong president.” He did not care for design 6.

Chairman Gary Marks liked designs 3 and 6, and liked 6 the most. He suggested moving the glasses from design 3 onto design 6.

Arthur Houghton found designs 3, 6, and 9 to be “variations on the same theme,” and thought design 2 depicted a “cerebral individual”, finding it “difficult to recognize” the president. He said he favored design 3 “slightly.”

Michael Olson saw design 3 to depict Wilson “younger than his presidency,” and found it in “direct competition” with design 6, but commented that the shading in design 6 was “not complimentary.”

Mike Ross noted that Wilson was our “most professorial” president, and saw in design 5 a sense of energy as Wilson appears to be “judging the world.”

Donald Scarinci noted Wilson’s head was “tilted down” in design 2, and that design 6 was “more professorial.”

The committee members cast their votes as follows, with their support narrowly going towards design 2.