On May 25th, 2011, the Citizens Coinage Advisory Committee met to review and discuss the candidate designs for the 100th Infantry Battalion, 442nd Regimental Combat Team, and Military Intelligence Service Congressional Gold Medal. In attendance at the meeting were Christine Yamakazi, chairperson of the National Veterans Network; Terry Shima and Min Naguoka, who represent the 442nd Regimental Combat Team; Grant Ichikawa, who served in the Military Intelligence Service in the Pacific campaign; and Gerry Yamada president of the Japanese-American Veterans Association which is based here in Washington, D.C.

Ms. Kaarina Budow started by reading the authorizing legislation for the medal: “Public Law 111-254 authorizes the Secretary of the Treasury to strike the Congressional Gold Medal collectively for the 100th Infantry Battalion, the 442nd Regimental Combat Team, and the Military Intelligence Service, United States  Army in recognition of their dedicated service during World War II.” She continued with descriptions of the three obverse and three reverse design candidates. 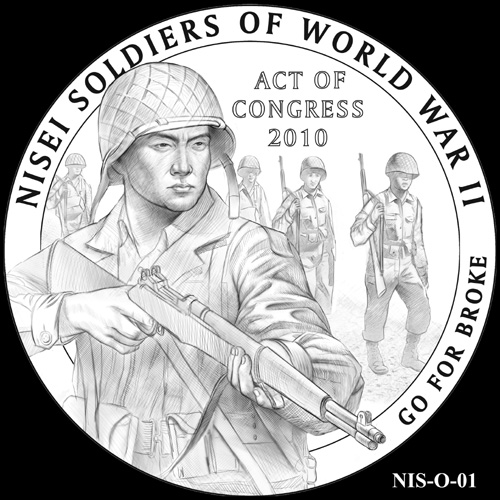 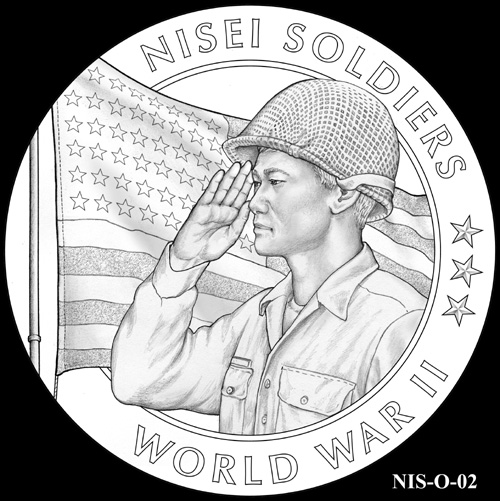 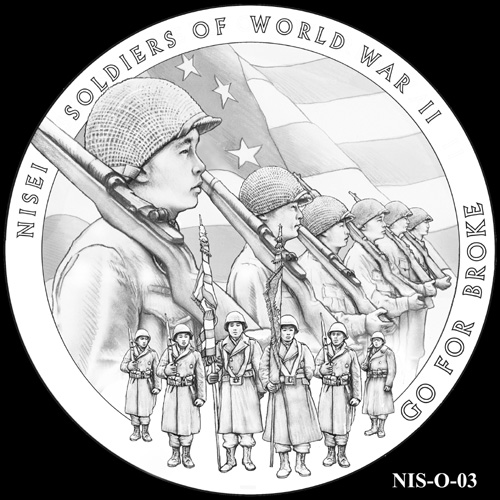 The first observe design depicts a group of Nisei infantrymen on patrol in a path through the countryside in the European theater. The second depicts a Nisei soldier in World War II uniform saluting the American flag. The third represents Nisei soldiers in training from both the European and Pacific theaters. The first reverse design depicts the three unit insignias, overlapping slightly to form one element, signifying unity of purpose. The second enables three units again to be represented in a simplified design. The third design again depicts the insignia of the 100th, MIS and 442nd. Surrounding the insignia is a decorative ribbon. Ms. Budow concluded by stating that the National Veterans Network prefers obverse designs 1 and 3 and reverse designs 2 and 3. 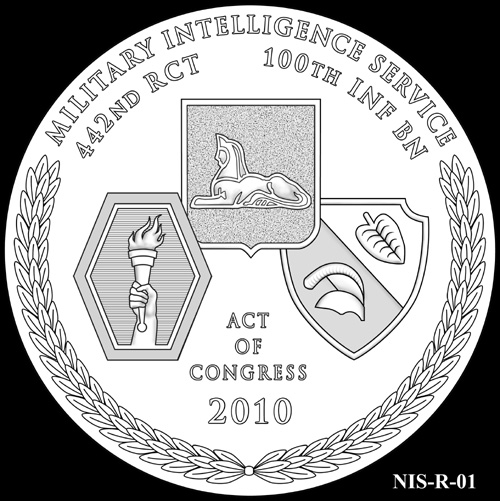 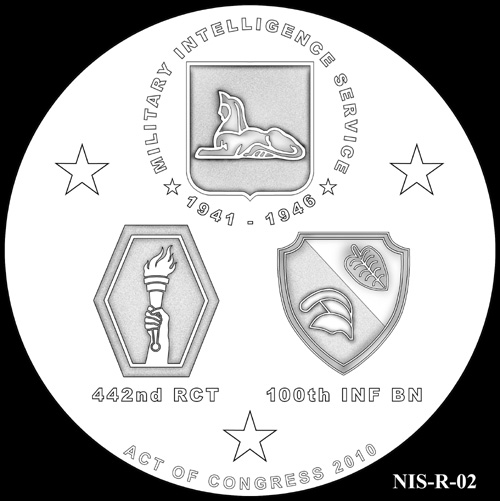 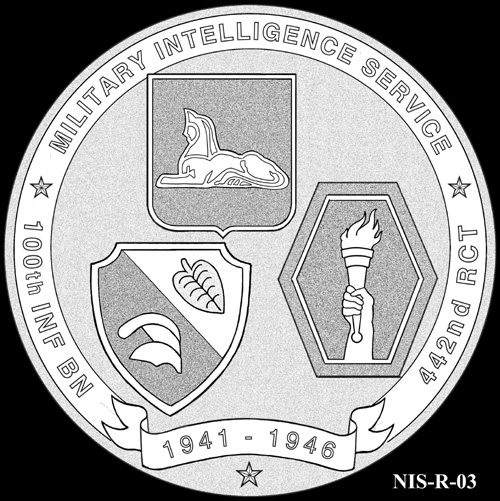 The first CCAC member to comment on the designs was Heidi Wastweet, who mentioned the “complex emotional topic” of soldiers fighting in a military whose government had their relatives in internment camps back home. In obverse design one, she saw the “overwhelming emotion” of “aggression and anger.” She added that the sacrifice of these soldiers “did not come from a place of anger, it came from a place of loyalty and honor.” She said that obverse design three also had this feeling, but achieved it with the use of the American flag and stars around the soldiers, calling the halo of stars around the soldier’s head “very beautiful” and indicating her strong support for this design. Of the reverse designs, she encouraged her fellow committee members to focus on design 2, and asked Don Everhart of the U.S. Mint to describe the shading in the design and how that would translate to the actual medal, using different textures and incusing techniques to emphasize the design elements. She concluded her comments by stating that the laurel in reverse design 1 gives it “a little too much of a Roman look”, and that reverse design 3 looked “a little collegiate and more like a coin than a medal”; she was in favor of reverse design 2.

Erik Jansen was next, indicating he liked obverse design 3 for “the same reasons” as Ms. Wastweet, and thought that obverse design 2 “misses the mark” with it appearing more static. Of the reverse designs, he favored design 2, once he determined from Don Everhart of the Mint that the lettering on the border would be in raised relief.

Michael Brown, attending via telephone, was succinct in his comments, preferring the third designs for both the obverse and reverse.

Chairman Gary Marks started his comments by commending the artists for the obverse designs, calling them “wonderful,” then stated that if the medal’s sponsors “had come today and said that there was one that they liked” he “would just go with that one because they’re all excellent.” But as there was an equal division in the preferences from the sponsors, he felt required to evaluate the two and “make comparative judgments.” The face in the first design, he said, had “the look of determination and focus that a soldier would have to have.” He also found the third design, calling it “grand,” but he thought the first design had “more focus to it.” He did not indicate which designs he preferred, opting instead to listen to the other comments.

Donald Scarinci followed the chairman, and expressed his support for obverse design 3 and reverse design 3. He did have some comments about how the designs for this medal contradict the rules that would apply for a commemorative coin, but these designs are for a gold medal. He recommended removing the wreath on the design, as it is now the 21st Century: “new wine, new wineskin.”

Mike Ross was next, and expressed happiness to be in this position to provide a different historical view of people of Japanese ancestry than what it is in the school textbooks and lectures, as that material only describes the selling of their businesses and being forced to move to “barbed wire internment camps.” The committee is adding to that story “in that the coins we pick will reflect how these men want to be remembered.”

Rick Meier was very direct with his comments: the flag is “absolutely indispensable so that there’s absolutely no confusion as to who they represent.” He also thought that reverse design 2 seemed “a little too simple for a large medal.” He finished simply: “3 and 3.”

Mike Olson started by thanking the veterans for their service, and that “today is going to be a day I’m going to remember the rest of my life.” He said he arrived to the meeting liking obverse designs 1 and 3, but after the testimony his full support “is going to number 3.” He did state the he would be making a motion to add an inscription indicating it was issued by an Act of Congress: “that needs to be said.” His support was for reverse design 3 as well, as it provided “the dates in regards to all of those organizations” rather than just the MIS.

After the primary votes were cast, Mike Olson entered a motion to add “Act of Congress” to either the obverse or reverse of the medal. Ms. Budow interjected that it is “tradition to normally have it with the year the law was passed,” which would be 2010 in this case. There was no discussion, so Chairman Marks called for a voice vote. Except for Ms. Wastweet and Michael Brown voting to oppose the motion, the other 6 members voted in approval, passing the motion.

Mr. Olson’s second motion was to concur with the CFA’s recommendation that the stars on the American flag “be investigated for proper placement.” Mr. Ross seconded the motion, and with no discussion, Chairman Marks called for another voice vote, but as it was not as clear-cut as during the first, he asked for a show of hands. Once the hands were counted, the motion failed on a 3 to 5 vote.