The committee’s recommendations are provided below, will brief descriptions based on a press release provided by the U.S. Mint. The Commission of Fine Arts will also review the design candidates on March 17 and put forward their own choices to be considered by the Treasury. 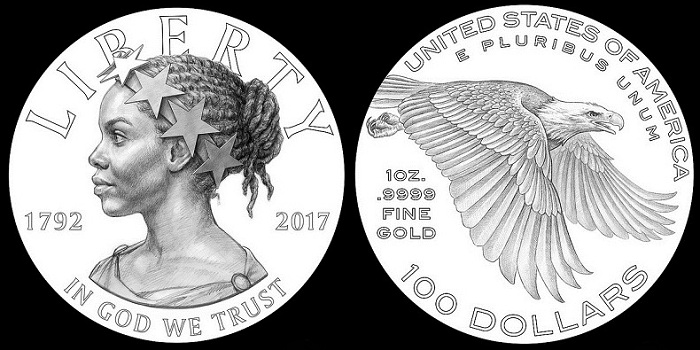 The above images were recommended by the committee for use on the 2017 American Liberty High Relief Gold Coin. A U.S. Mint press release points out that Liberty is depicted wearing a crown of stars, a nod to the Statue of Freedom atop the U. S. Capitol. The eagle on the reverse is described as “bold and powerful….with eyes toward opportunity and a determination to attain it.” The 2017 issue will be the second release in this series, which began with the 2015 American Liberty High Relief Gold Coin and will continue this year with the launch of a silver medal bearing the same design as the 2015 gold coin. 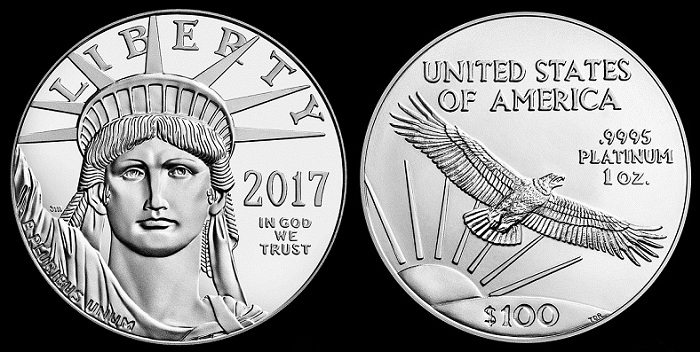 The 2017 American Eagle Platinum Proof Coin will celebrate the 20th anniversary of the debut of the U.S. Mint’s Platinum Eagle bullion coins in 1997. While coins in this series have always featured John Mercanti’s rendering of the Statue of Liberty as an obverse image, this reverse, designed by Thomas D. Rogers, Sr., has not been issued on a platinum Proof coin since its introduction in 1997. Unlike the other coins discussed at yesterday’s meeting, these mock-ups were the only options presented to the committee for use on the 2017 platinum Proof coin, and their acceptance is all but assured.

The 2017 Boys Town Centennial Commemorative Coin Program calls for the issue of three distinct coins: a $5 gold coin, a silver dollar, and a clad half dollar.

The recommended obverse for the gold issue features Father Edward Flanagan, the Irish-born priest who founded the Boys Town orphanage in Douglas County, Nebraska in 1917. A Mint press release notes that the reverse image of a hand holding an acorn growing into an oak represents “the potential of each child helped by Boys Town to grow into a productive, complete adult.”

The obverse of the silver dollar features an image of a girl looking toward an oak tree, which symbolizes her search for the rootedness and support of community. The reverse bears the image of a group of people — including the girl from the obverse — finding a sense of belonging beneath the grown oak tree, alluding to the stability children have found at Boys Town.

The clad half dollar’s obverse features “an older boy carrying a young polio victim,” and the inscription, “He ain’t heavy, he’s m’ brother,” which were adopted as the logo and slogan of Boys Town in 1943. The reverse carries the updated version of the logo, with the Boys Town pylon in the background.

Correction/Update, 3/17/16: Although the chosen designs for the silver and clad Boys Town coins were submitted to the committee with “silver” and “clad” designations, the committee ultimately decided they should be switched as the “medallic” clad design was seen as more appropriate for the larger dimensions of the silver dollar. They also recommended that the 100 YEARS reverse inscription on the clad coin be dropped, with the centennial dates of 1917-2017 added to the obverse.