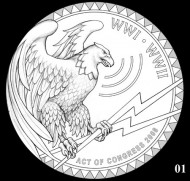 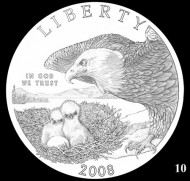 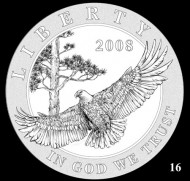 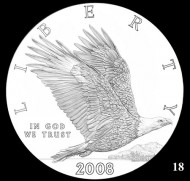 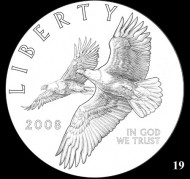 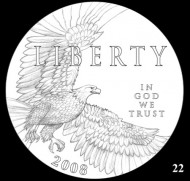 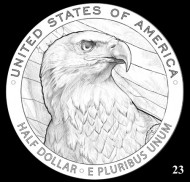 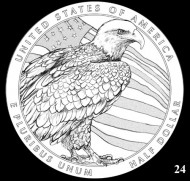 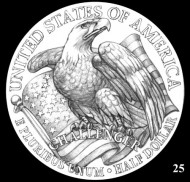 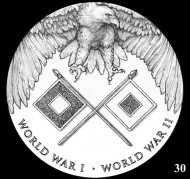 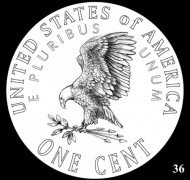 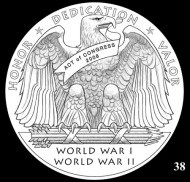 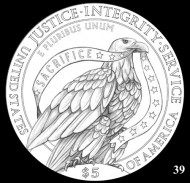 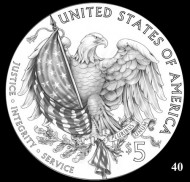 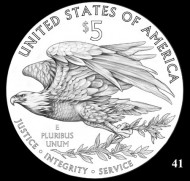 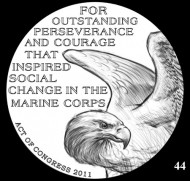 Dr. Michael Bugeja started the design comments with a retrospective of eagles and their use in coins in general, and in these designs in particular. He noted there are four types of eagles: stylized, personified, symbolic, and natural; in his opinion, only the symbolic type was appropriate for use on coins. Six of the members had indicated a preference for design 40, and eight had preferred design 41.

Michael Olson started his comments with a reminder that this coin is a flagship for the country. He would prefer more emphasis on the eagle over the shield. He was not inclined to reuse older designs. He indicated he would give his full support to design 41. He floated the idea of a redesign of the American Gold Eagle, much like the committee was currently discussing the American Silver Eagle. Chairman Marks replied that it was a possibility, just not being discussed at this time.

Mike Moran mentioned that design 41 would carry the necessary inscriptions for the coins. He asked if instead of the committee’s usual single recommendation they could compose a “top 3” set of designs, as this is not the usual situation.

Jeanne Stevens-Sollman noted that they “need to make this coin fantastic for the country and the world.” On the specific designs, she said she thought it would be lovely to see the eagle rising in designs 40 and 41.

Chairman Marks indicated he was favoring design 41, noting that it pairs well with the Weinman obverse design. He said the inscriptions on the existing reverse are simple. Robert Hoge said he was “in agreement” with design 41, but also liked design 23, noting its similarity to the Olympic silver dollar. He mentioned that designs 25 and 40 looked busy with the flag, but liked the olive branch in the talons.

Heidi Wastweet noted she would want to see variations on design 41, giving the Mint artists some “breathing room”. She also wanted to see arrows added to the existing olive branch, following the classic combination of peace with the threat to protect that peace. She said that she would want the American Silver Eagle “to be distinct” from any other coins (design 40 is currently up for approval by the Treasury Secretary for the 2015 US Marshals Commemorative $5 Gold Coin).

Donald Scarinci was wide-ranging in his comments. He gave an honorable mention to design 4, noting that the circular pattern invokes motion. He thought design 15 was “nice”, but while he noted there were issues with the wings, he said it had “beautiful, clean fields” and a focus on the eagle over the other features. He said the eagle on design 22 was “gorgeous”, noting it embraces the coin. He did not like design 40 for this coin in general, but also thought there was “too much happening.” He closed his comments with a plea: “Can we just have an eagle?”

Erik Jansen indicated his preference to “action over pose”, and encouraged his colleagues to vote for a series of preferences, rather than a single design. He said he would be “really really really let down” if the new design resulted in the “bird-feather equivalent of spaghetti hair”. He asked the Mint to “sculpt detail, and not Photoshop this sculpt.” He made a point of stating he was not in favor of design 41, noting the unrealistic depiction of the olive branch in the wind. His backup was design 24, but wanted to make sure it showed feathers and not scales. He also called out design 19 as an “interesting design,” depicting two eagles over one. He liked design 44, but felt it wasn’t the right design for this coin.

Thomas Uram was the last to comment, and started with asking, “What is the upside of changing an already-successful design?” He was leaning strongly towards only changing the proof coin rather than it and the bullion coin. He mentioned that the 30th anniversary of the coin is coming up in 2016: a natural time to make a change, perhaps in a high relief specimen. He was not sure he was on the “design 41 train”. His top pick was design 22, but it needs “LIBERTY” removed and the eagle strengthened. He closed his comments with a warning not to mess with “the best bullion coin that’s out in the world.” 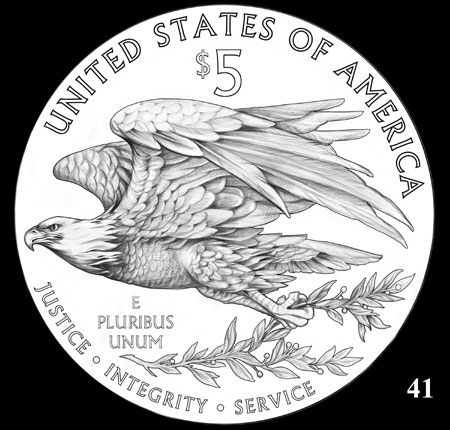 With 23 out a possible 30 points, design 41 received the committee’s recommendation, per their standing procedures.

There were two motions made. The first was by Erik Jansen, asking if the committee should include five designs rather than just one; the way the votes fell, there was one clear favorite and four designs in a ‘runner-up’ pack. During the discussion of the motion, Ms. Wastweet noted that the 1st runner up was not close (23 versus 8), and Mr. Olson said that the committee had never seen 44 designs for a single coin. It failed to pass, falling on a 3 yea to 7 nay vote.

The second motion was by Michael Olson, to include the various elements that were discussed (adding arrows, removing olive branch, location of inscriptions, et cetera) and to give the Mint a free hand to present options. There was little discussion, and it was unanimously passed, 10-0.