By statute, there is a limit of two numismatic commemorative programs per year that can be produced, and Congress has already enacted programs for several programs to be released in the future; therefore, the committee will not have recommendations to make for those years, but there are some openings through the year 2016. Chairman Gary Marks noted that Congress already has enacted 2 programs for 2011, 2012, and 2013. There is one slot already filled for 2014, for the 150th anniversary of the Civil Rights Act of 1964, and the CCAC had, in their fiscal 2010 report, recommended a National Fallen Firefighters Memorial as a “book-end” entry to match a similar commemorative from the 1990’s for police officers. 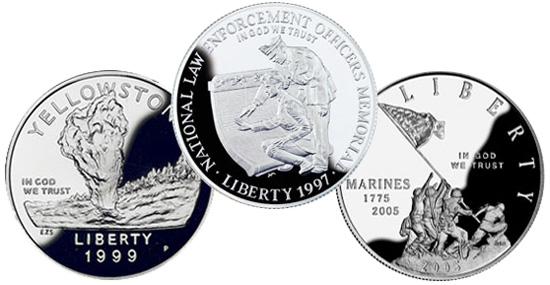 Dr Michael Bugeja mentioned the restoration of the flag which flew over Fort McHenry, which was the inspiration for the Star Spangled Banner. He also said that women were generally underrepresented on commemoratives, and finished with the general concept of unity as a commemorative theme.

Michael Olson mentioned space exploration as a possible program source, and Arthur Houghton talked about values and innovation as areas that could be explored. Mr. Olson also noted that while there have been many coins honoring the Army and the Marines, there are no commemoratives that specifically honored the Navy or the Air Force. Chairman Marks added the Coast Guard to that list.

Heidi Wastweet asked if unions has been previously commemorated: Michael Ross indicated he would need to do some research on any significant dates for the labor movement. Chairman Marks was a bit concerned that a commemorative coin for the National Parks Service might conflict with the existing America the Beautiful quarter dollar series, but Ms. Wastweet offered that it might as easily be complimentary to that series. The 225th anniversary of the United States Mint was mentioned, but as it will occur in 2017, it is outside their recommendation window.