During a meeting held on February 11th, 2014 at the U.S. Mint’s headquarters in Washington, D.C., the Citizens Coinage Advisory Committee discussed the creation of a 2014 24K gold Kennedy half-dollar to mark the 50th anniversary of the coin’s release. The Mint gave a detailed presentation where they showed how the artists went to the earliest available material from the coin’s original obverse designer, Gilroy Roberts, which factored out the enhancements made to the hair in the design. The Mint provided two mockups of the coin, one with just “2014” and the other with a dual date “1964 – 2014”. 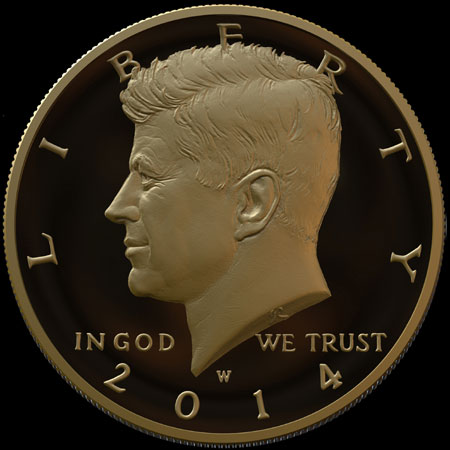 The committee members were divided on the date, but that was the simplest item. Dr. Michael Bugeja started the discussion by reminding his colleagues that 1964 was important numismatically beyond the Kennedy half dollar, supplanting the shortened Franklin design, noting the belief that the Peace dollar was to be re-released, but the produced specimens were melted down before they could reach the public. Erik Jansen noted a potential issue which could provide a return of the deception after some of the 1883 “V” nickels were gold-plated and passed as if they were five-dollar gold pieces. Chairman Gary Marks was against the dual-date, and was in favor of increasing the thickness of the planchets to raise the quantity of gold to one ounce. 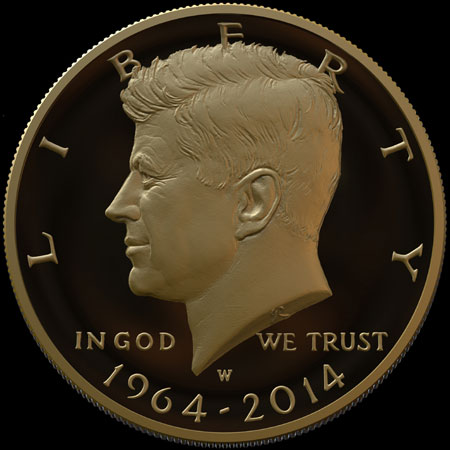 Michael Olson noted that this series has been collected for 50 years, but banks were rationing them in 1964, when people were waiting in lines for the newly-minted coins. This is a relatively inexpensive collection, and “it would be a mistake”, in his opinion, to make the coin in the same dimensions as the current half-dollar. He favored the dual date, and suggested that the fineness of the coin should be added to the reverse design, as well as the West Point mint mark, just as the mark was in 1964. 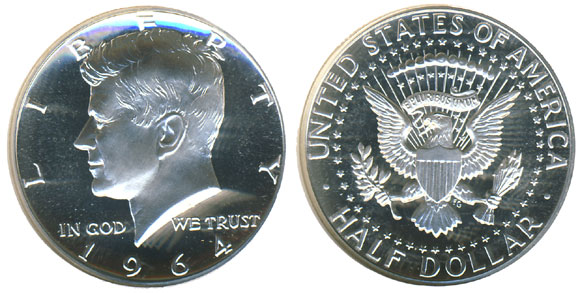 Donald Scarinci agreed with Mr. Olson on the dual date and mint mark, and reminded everyone that a completist collector would purchase the coin regardless. He suggested that the Mint should err on the side of less expensive, but alteration of the thickness could cause striking issues with the metal flow. Thomas Uram wanted to know if a silver version of a dual-date half-dollar: regardless of the outcome for the commemorative coin, the standard 90% silver and copper-nickel clad half dollars would be made with 2014 date, a point which pleased Chairman Marks. Robert Hoge was concerned that this coin might not even be considered a half-dollar coin, which invoked an emphatic plea from Chairman Marks: “don’t honor the half dollar and not make it a half dollar.” It was noted that the original design was reviewed by Jacqueline Kennedy for accuracy. Michael Moran expressed his position as a purist: single date, mint mark on the reverse. He suggested the fineness be added to the edge; while the depictions in the drawings and renderings were with a reeded edge, it did not necessarily need to have that aspect of the existing half dollar. Michael Ross voiced no opinion, whereas Jeanne Stevens-Sollman liked the dual date, thought the fineness should be on the reverse, and the coin should be a full ounce, stating “it would be silly to go with a partial ounce.”

Erik Jansen had lots of questions, concerns, and comments. He wondered if any impact to the existing bullion market was expected with the release of this coin; the sales and marketing representatives from the Mint initially said the price of the coin would move with the bracketing of other gold coin products, but later indicated that there would likely be a limited window for the coin’s purchase, which would necessitate a fixed price. He also warned of a potential arbitrage issue, but suggested the 2009 Ultra High Relief Gold Coin as a successful model. Lastly, he tossed out the suggestion of reducing the Presidential Seal by 5% to provide space for the fineness to fit on the reverse.