The Central Bank of Luxembourg has begun a new series of collector coins featuring the Castles of Luxembourg. Each coin in the series will be composed of a core of niobium surrounded by a ring of silver, similar to the highly popular Austrian Mint annual silver/niobium series. The first coin released in the new series honors the Chateau of Vianden.

The Castle of Vianden is located on the rocks above the town of Vianden. It was recently restored and has become a museum which traces its history to the royal families of Europe from the middle ages. The castle was constructed between the 11th and 14th centuries on the foundations of a Roman ‘castellum’ and a Carolingian refuge. It is one of the largest and most beautiful feudal residences of the romanesque and gothic periods in Europe. 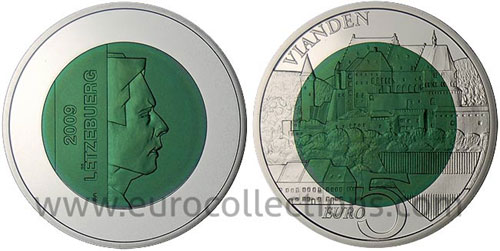 The obverse of the coin carries a profile portrait of Grand Duke Henri, with the country and year of issue to the left. The reverse design features a detailed depiction of the Vianden Castle, perched upon the rocks overlooking the town. Above and to the left is the inscription “Vianden”, while at the bottom is the nominal face value of 5 euro.

The coin is comprised of an outer ring of 92.5% silver and an inner core of niobium, colored green. The coin measures 34 mm in diameter, has a weight of 16.6 grams, and has been struck to brilliant uncirculated standards. The Chateau of Vianden silver niobium coin is presented in a full color, informative coin folder with a protective outer slipcase.

Additional coins in the series are to be issued on an annual basis. The following Castles will be honored in the coming years of the series: