The Royal Canadian mint have launched a new silver collector’s coin which marks the 25th anniversary of the country’s national Space program, that of the Canadian Space Agency or the CSA. Essentially it is Canada’s equivalent of NASA in the United States and is the organization that oversees Canada’s leading edge space program and fuels the nation’s space industry. The new coin was unveiled at the International Astronautical Congress 2014 held at the Metro Toronto Convention Centre. Participating in the launch was Royal Canadian Mint Board of Directors John Bell, who was accompanied by astronauts Jeremy Hansen and David St. Jacques and CSA President Walter Natynczyk, all on hand to unveil the coin’s design to attending media. 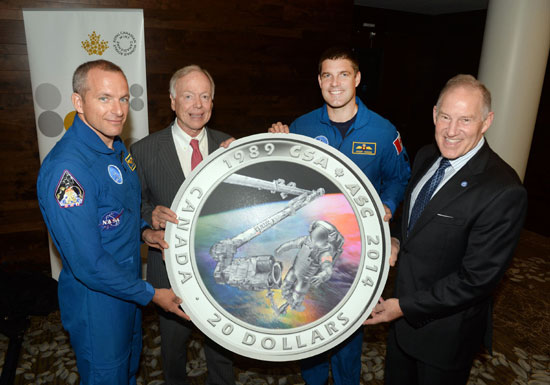 The Canadian space contribution is more closely associated with the Shuttle Remote Manipulator System (SRMS), also known as Canadarm (Canadarm 1) which was a series of robotic arms that were used on the American Space Shuttle orbiters to deploy, maneuver and capture payloads initially with the first remote manipulator system being delivered to NASA in April 1981. Canadarm2, is the robotic system and associated equipment presently in use on the International Space Station (ISS). 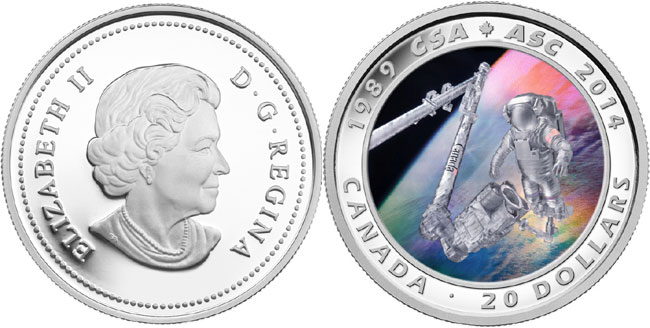 The reverse design of the new coin features an achromatic hologram image of a Canadian astronaut floating weightlessly above the Earth. The astronaut is anchored to a foot restraint on Canadarm2, which bears the now familiar “Canada” Wordmark. In the distance we see the cloud mottled blue surface of Earth, backed by the black depths of space. The hologram lends depth and movement to the design; the astronaut seems to float above the Earth. The obverse side includes the current effigy of HM Queen Elizabeth II as used on all circulation and many commemorative coins in Canada since 2003 and designed by Susanna Blunt.