The Royal Canadian Mint has launched a new coin in their widely collected and ever-popular silver dollar series. The subject for this issue is the 75th anniversary of the commencement of World War II, which for Canada began with the declaration of war against the Third Reich and the Axis powers by the United Kingdom in September 1939.

Canadian mobilization commenced almost immediately and the factories in Canada which had beforehand produced heavy machinery and transport vehicles during peace time, were transitioned into factories producing needed airplanes, warships, tanks and jeeps which would be transported to the front lines in Europe and to Asia. The question of how the production would continue with so many able-bodied men signing up for military duty was solved when many women took the places of their husbands, brothers and fathers and were recruited by these plants as soon as they could train them for these positions. For more than six years, the women who took on this work, once thought to be predominantly reserved for men, performed admirably and were credited with the ability to supply the needed ammunition and aiding the war effort – and at the same time, looking after young children and keeping homes in order. 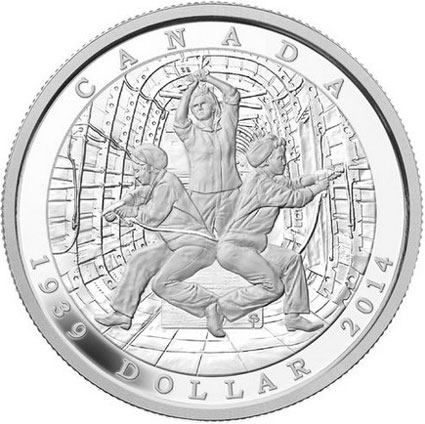 The coin, designed by artist Silvia Pecota, depicts an iconic scene of a trio of female factory workers riveting the fuselage of a Lancaster bomber. This was a precursor to the American persona of “Rosie the Riveter” which encouraged and convinced American women that they too could take up the work and labor needed to keep the war effort going. These images during the fighting, underlined the importance of the Home Front, which saw so many women employed in military manufacturing, to the Allied victory which would come in 1945. The obverse includes the current portrait of HM Queen Elizabeth II which is used on all Canadian coins since 2003, the portrait is the work of Susanna Blunt.

The coin is encapsulated and presented in a Royal Canadian Mint-branded maroon clamshell style box with serialized certificate of authenticity.