The Royal Canadian Mint has announced their first collector coin of the year, the 2012 Proof Silver Dollar celebrating the 200th anniversary of the War of 1812. 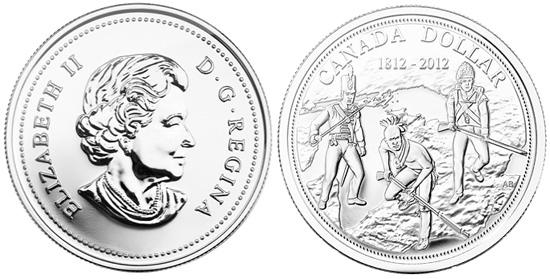 The coin is designed by military artist Ardell Bourgeois of British Columbia and features a British Sergeant, a Voltigeur Canadian, and an Iroquois warrior united in defense of their border. Behind the group is a map depicting part of the Great Lakes and Southwestern Ontario. The reverse design is encircled by 200 beads near the rim to symbolize the 200th anniversary of the War of 1812.

The obverse design features the effigy of Queen Elizabeth II, designed by Susanna Blunt in 2003.

For additional information or ordering, visit the RCM’s website at http://mint.ca/