The Royal Canadian Mint have issued a new gold coin which begins a new four-coin series featuring the various numismatic portraits of HM Queen Elizabeth II that have appeared on Canadian coinage during the Queen’s reign.

The glorious Canadian maple and Canada’s beloved Sovereign, Her Majesty Queen Elizabeth II, Queen of Canada – two icons that for more than sixty years have symbolized Canada and their collective sense of identity. The Royal Canadian Mint proudly celebrates the remarkable reign of the Queen with a new series featuring the four effigies of Her Majesty that have appeared on Canadian circulated coinage since 1953. 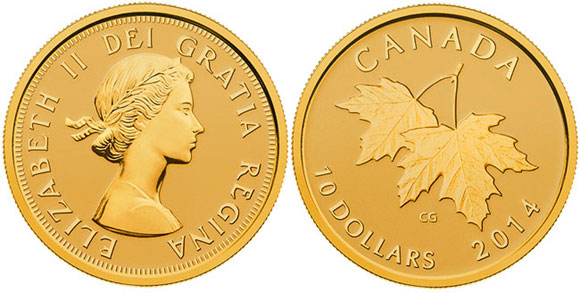 The first coin in the series features a re-creation of the effigy of Her Majesty created in 1952 by British sculptor Mary Gillick which first appeared on Canadian coinage from 1953 until 1964. The effigy of the Queen was completed for use on British and several commonwealth countries’ coinage (including Canada) when she was 27 years old. Her Majesty wears a simple laurel wreath around her head. Her shoulders are draped in a flowing garment. The effigy is encircled with the Latin legend “ELIZABETH II DEI GRATIA REGINA,” which translates “Elizabeth II, by the grace of God, Queen.”

The reverse carries a graceful maple leaf illustration by botanical artist Celia Godkin. Pointing downward, the two overlapping maple sugar leaves are attached by their stems to a single twig at the top of the image. The leaves are engraved with careful precision using a variety of textures to lend depth to the image. The reverse is engraved with the words “CANADA”, the date “2014”, and the face value of “10 DOLLARS”.