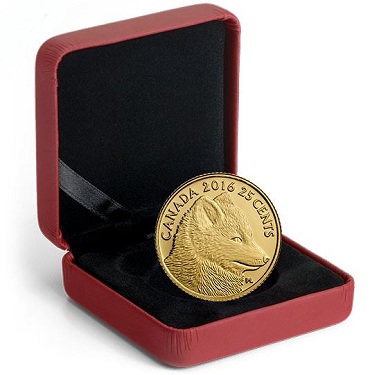 The Royal Canadian Mint has released the 2016 Arctic Fox Pure Gold Coin, which is the first of four coins to be issued this year as part of the Mint’s new “Predator vs. Prey” series. There will be two fox designs and two hare designs, illustrating a theme that showcases the inextricable relationship that exists between these two species.

The coins in this series are notable for being the smallest gold pieces currently issued by the Royal Canadian Mint. They are composed of .5 grams of 99.99% gold and have a diameter of 11 mm. In keeping with the smaller size, these coins are relatively affordable for issues made of pure gold, and are billed by the Mint as a good way to “start someone’s gold collection.” The Arctic Fox coin is available for $79.95 CAD (about $60 USD). 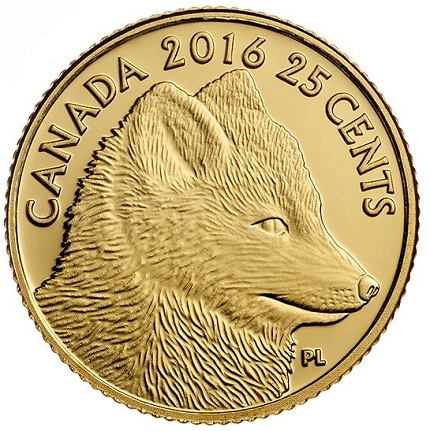 The obverse of the coin, designed by Pierre Leduc, features a profile image of an artic fox with the inscriptions CANADA, 2016, and 25 CENTS placed in the field. The artist’s initials are also included. 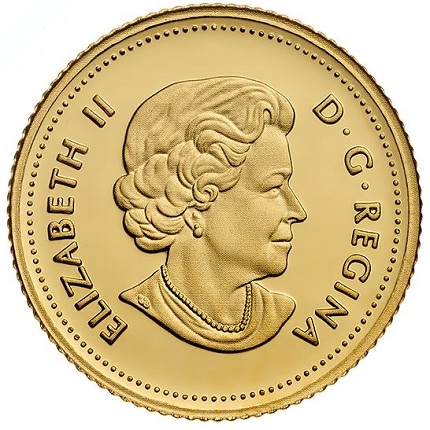 The obverse bears Susanna Blunt’s portrait of Queen Elizabeth II, with the inscriptions ELIZABETH II and D.G. REGINA located in the field. The coin has a denomination of 25 cents.

The mintage of this coin will be limited to 6,500 pieces. Collectors can also sign up for a subscription to the 2016 Predator vs. Prey series, which comes with a free four-coin display case. The next release in the series will feature a traditional Arctic Hare and will be issued in May.

For more information on the 2016 Arctic Fox Pure Gold Coin, please visit the Web site of the Royal Canadian Mint.