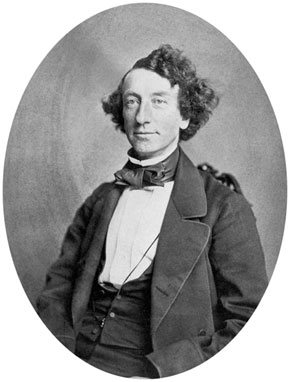 The Royal Canadian Mint have launched four new coins which pay tribute to Sir John Alexander MacDonald who became Canada’s first Prime Minister after confederation in 1867. As Canada approaches their 150th anniversary of this historic event in 2017, attention will be turning towards the men and conferences which made this possible. A total of four coins have been issued on the occasion of the 200th anniversary of the birth of John MacDonald.

Originally born in Glasgow, Scotland, MacDonald was a boy when his family immigrated to the town of Kingston in the colony of what was once Upper Canada (today in eastern Ontario). Macdonald’s formal schooling ended at the age of 15 which was common at the time when only children from the most prosperous families were able to attend university. Nevertheless, Macdonald’s parents decided he should become a lawyer after leaving school. Macdonald traveled to Toronto (formerly known as York until 1834) and passed the examination conducted by The Law Society of Upper Canada. The examination also included mathematics, Latin, and history and, as British North America had no law schools in 1830, students were simply examined before and after their tutelage. Macdonald was regarded as a promising student and soon began his apprenticeship with George Mackenzie, a prominent young lawyer who was a well-regarded member of Kingston’s rising Scottish community. Sadly, George Mackenzie died of cholera in August 1834 and, with his supervising lawyer now gone, Macdonald, though not yet of age nor qualified, began his practice as a lawyer, hoping to gain his former employer’s clients. Shortly after, Macdonald was called to the Bar in February 1836 and had begun to seek out high-profile cases, earning positive press comments for the quality of his defense and for an honest reputation.

In March 1843, Macdonald successfully ran for the post of alderman in Kingston’s Fourth Ward and ended up defeating his opponent with 156 votes in favor of him, and 43 against, it was MacDonald’s first election victory and his first taste of political life but certainly not the last. By 1858, MacDonald, now the Premier of Canada West and having presided over the decision by Queen Victoria to name the small Canada West town of Ottawa as the new proposed Canadian capital – something MacDonald had opposed. With the possibility of an American Civil War looming, the fears in both Canada and in Britain that once the Americans had concluded their internal warfare, they would invade Canada again and there were even greater fears in French Canada that they would be lead into a war instigated by the British. A conference, called by the Colonial Office, was scheduled for the 1st September 1864 in Charlottetown, Prince Edward Island to discuss a or consider a union or, a confederation of the Canadian territories. Just a few weeks after what was later referred to as the Charlottetown Conference, delegates met in Quebec City in October for the Quebec Conference, where the Seventy-Two Resolutions – which would later form Canada’s overall government, were agreed to.

On the 8th March, the British North America Act, which would later emerge to serve as the cornerstone of Canada’s constitution, passed the British House of Commons as it had previously passed the House of Lords. Queen Victoria, who would continue to serve as head of state of any new confederation, gave the bill Royal Assent on the 29th March 1867 with the newly created Dominion of Canada coming into official existence on the 1st July. Lord Monck, who would be the last Governor-General of the Province of Canada and the first Governor General of the Dominion of Canada, appointed Macdonald as the new nation’s first prime minister. With confederation, the lands of Canada East and Canada West became separate provinces, known as Quebec and Ontario. John Macdonald was also knighted on that first observance of what came to be known as Canada Day, 1st July 1867. MacDonald served twice as Canada’s Prime minister, first from the day of Canada’s creation until the 5th November 1873 and then a second time from the 17th October 1878 until the 6th June 1891, for a total of nineteen years, the second-longest serving Prime Minister in Canadian history. “The Old Chieftain” a nickname had acquired during the many years in office, died in office on the 6th June 1891. He was buried in Cataraqui Cemetery in Kingston, next to his first wife Isabella. He was survived by their son, Sir Hugh John Macdonald, a politician in his own right. A portrait of Sir John MacDonald has been used on the Canadian ten Dollar note since 1968 and has appeared on this denomination ever since.

The coins, four in total include a circulation 2 dollar coin as well as two silver and one gold collector variations completing the tribute. 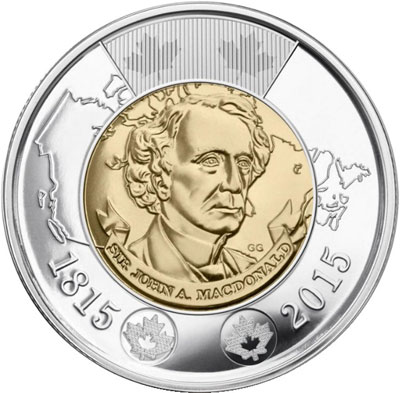 2 dollars: The coin’s reverse image was designed by Canadian artist Glen Green and is inspired by archival photographs of Sir John A. Macdonald. 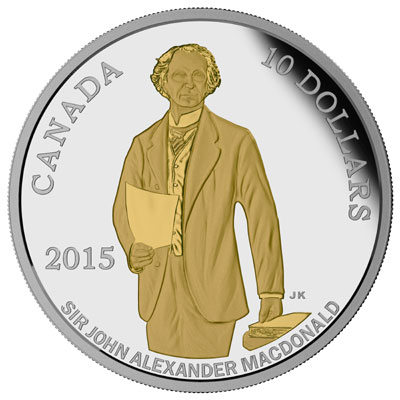 10 Dollars: The reverse features an original portrait of Sir John A. Macdonald by Canadian artist Joel Kimmel. The front-facing portrait of a standing MacDonald is also selectively gold-plated and includes the denomination and year of issue. 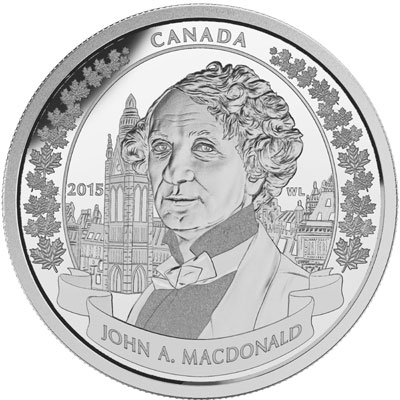 20 Dollars: The reverse shows a three-quarter facing portrait of Sir John by Canadian artist William Lazos, with the backdrop of the original Parliament Buildings and a border of maple leaf garland. The year of issue is also included in the design. 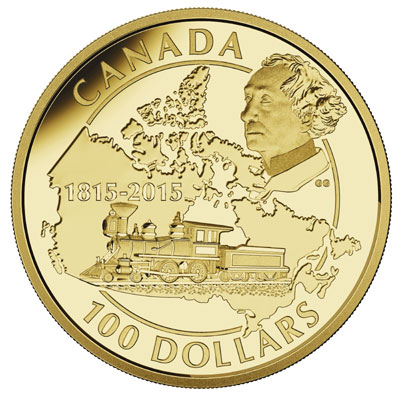 100 Dollars: The reverse features an original left-facing portrait of Sir John A. Macdonald by Glen Green along with elements represented of Macdonald’s primary achievements, a steam engine, representing the completion of the Canadian Pacific Railway and a map of modern Canada, symbolizing the expansion of the Canadian confederation to the pacific coast.

All coins include an effigy of HM Queen Elizabeth II as designed by Susanna Blunt and in use on current Canadian circulation and many commemorative coins since 2000.

For additional information on these and other new coins available from the Royal Canadian Mint, please visit the new releases section of their website.