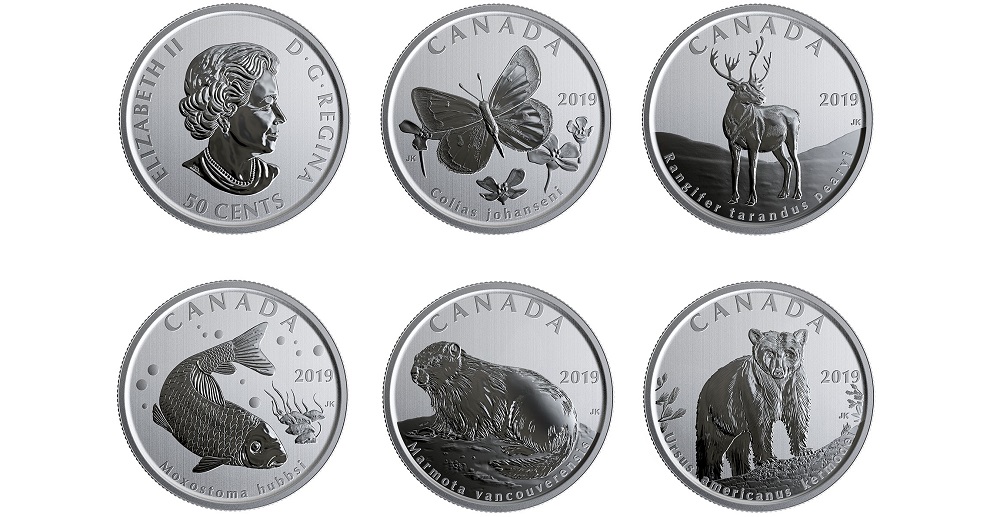 The Royal Canadian Mint has released new collector 50-cent coins with a theme that the RMC excels in, focusing on the wildlife of this vast North American country. The new five-coin set entitled “Wildlife Treasures” has a strong Canadian connection. From an imposing bear to a delicate butterfly, this particular set introduces five of Canada’s endemic animals that are only found in Canada and nowhere else.

Canada has about 286 endemic species; many of these endemic animals may be easily overlooked on account of their size. A variety of these are various insects and invertebrates. Many of these invertebrates might not be considered as charismatic as a large mammal, like a bear, but they provide critical ecosystem services needed by all life on Earth. Others, such as butterflies, are good at capturing people’s attention.

Designed by artist Joel Kimmel, the coins in this set feature five of Canada’s endemic animals:

The 2019 “Wildlife Treasures” set was made possible from a collaboration with the Toronto Zoo.

The obverse side features the effigy of Her Majesty Queen Elizabeth, designed by Canadian artist Susanna Blunt in 2003. The denomination of 50 CENTS is placed below the Queen’s likeness.

The all-Canadian Wildlife Treasure coins are packaged inside a colourful folder that opens up like a magazine spread. In addition to the five coins, there is information on each animal’s size and other fascinating facts, plus a map that indicates where these Canadian creatures are found. For additional information about this set and other products available from the Royal Canadian Mint, please visit their website.