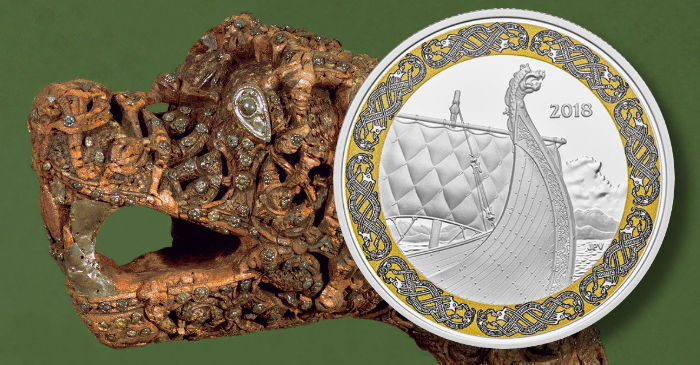 Background image from the Museum of Cultural History, University of Oslo, Norway.

In my first column on the Norse Figureheads series, I covered the Northern Fury coin. Now, the Royal Canadian Mint has released their second silver coin which revisits the long and historic ties of Viking exploration in North America more than 1,000 years ago. It is part of a three-coin series that re-visits the Viking Age, a time when the naval expertise of Norse seafarers left an imprint on history wherever their ships came ashore, including Canada’s east coast.

For centuries, Icelandic sagas spoke of Viking expeditions to new shorelines that seemingly matched the North Atlantic coast. They chronicled Leif Eriksson’s exploration of Helluland, the “Land of Stone Slabs,” which was likely Baffin Island, the northern tip of Labrador, and the timber-rich land aptly named Markland, (“Forest Land”). They also told of a resource-rich area named Vinland — a place that seemed more myth than fact until the 1960s — when the remains of an 11th century Norse settlement were unearthed on Newfoundland’s Great Northern Peninsula, effectively confirming these sagas as fact.

Today, L’Anse aux Meadows National Historic Site, a UNESCO World Heritage Site in Newfoundland, is recognised as the oldest European settlement in the New World, and the first authenticated Viking settlement in North America. Its artifacts and structures are proof that Norse ships did indeed come to the shores of North America more than 1,000 years ago, almost 500 years earlier than Columbus. 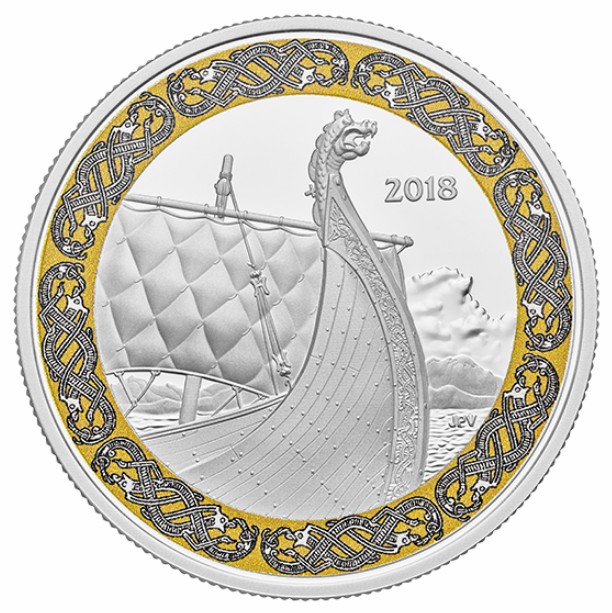 This reverse was designed by Canadian artist Jean-Pierre Vallée and is inspired by the saga of Leif Eriksson’s voyage from Greenland to Vinland. In the background, the rugged North Atlantic coast of present-day Canada rises up from the sea and resembles some of the new shorelines spied during Eriksson’s expedition around AD 1000. In the foreground, a fearsome Norse dragon ship sails into view. The sea-level perspective places a special emphasis on the square mast and highly intricate woodworking that made a Viking ship both a technical and artistic marvel during its time. Ornate carvings of gripping beasts lead up to the dragon figurehead on the prow, which was intended to ward off evil spirits while adding to the ship’s imposing appearance. A similar Norse art-inspired pattern of interlaced serpents is replicated on the selectively coloured frame, which surrounds the artistic interpretation of an early chapter in Canada’s history. 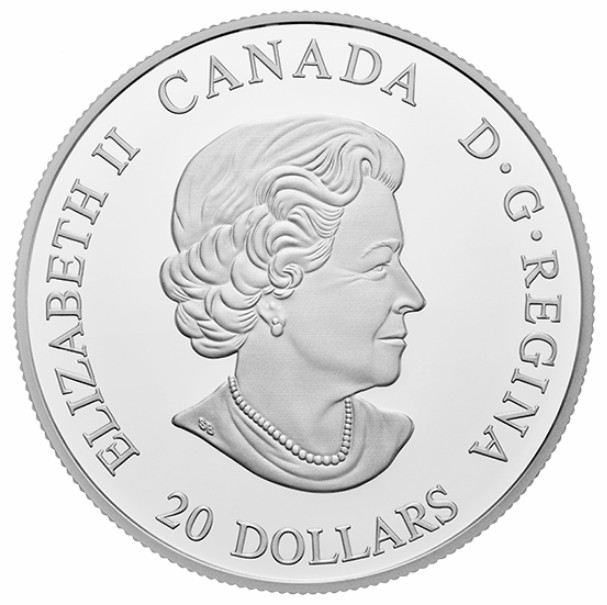 The obverse side features the effigy of Her Majesty Queen Elizabeth II that was designed by Susanna Blunt and has been seen on all Canadian circulation and many commemorative coins since 2003. The coin’s denomination of 20 DOLLARS is placed below the Queen’s effigy. 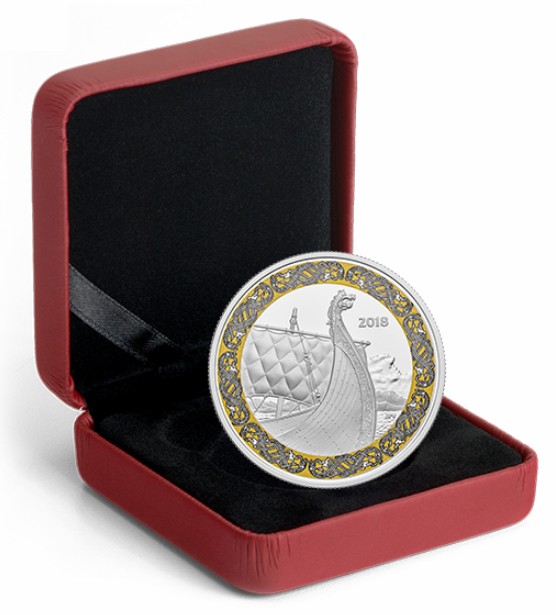 Each coin is encapsulated and presented in a custom-branded Royal Canadian Mint case and is accompanied by a numbered certificate of authenticity. The third and final coin in the Norse Figureheads series is expected in March 2018. Subscriptions are available for the coins in Canada and the United States only. For additional information on this coin and others available from the Royal Canadian Mint, please visit their website.

Canada: New coin highlights “Symbols of the North” with gold sourced entirely from territory of Nunavut