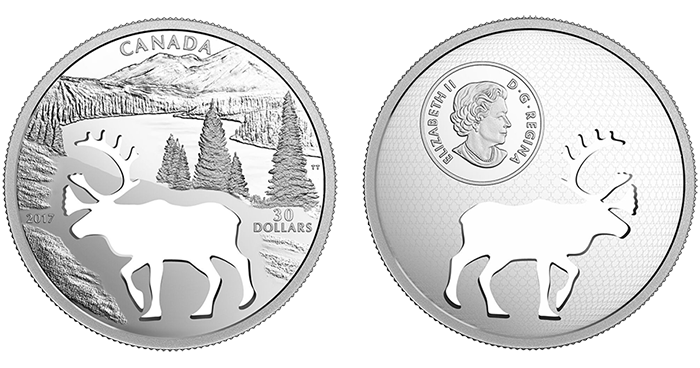 The Royal Canadian Mint have launched the first coin in a series that will highlight endangered species indigenous to Canada and North America. To symbolise these species’ being cut out of existence, each coin will feature a cutout of the silhouette of the subject animal within in its natural habitat.

State-of-the-art technology and internationally renowned craftsmanship have come together to produce the first coin, which depicts the woodland caribou (Rangifer tarandus caribou). Sadly, this majestic mammal joins other Canadian creatures that are classified as at risk, threatened, or even endangered—particularly the Southern Mountain population of caribou, which is listed as threatened on Canada’s Species at Risk Act (SARA). The coin represents an artistic tribute to a beloved species, and the overall design offers a haunting re-imagining of the Canadian wilderness without this national icon. Designed by Canadian artist Trevor Tennant, the coin transports the onlooker to the mountainous landscape of western Canada, where detailed engraving and multiple finishes recreate a timeless snapshot of the wild. The distant peaks provide a breath-taking backdrop to the grassy foothills, which slope down to the tree-lined river below; and while the beauty of the engraved scene is unmistakable, it is the uniquely shaped cut-out that easily draws the viewer’s eye. Innovative technology has skillfully carved out the outline of a woodland caribou, smoothly recreating its distinctive profile and towering rack of antlers. With its uniquely shaped cut-out, this pure silver coin shines the spotlight on the plight of the caribou, a national symbol whose numbers are in decline in Canada’s wilderness.

A Guide Book of Canadian Coins, by James Haxby 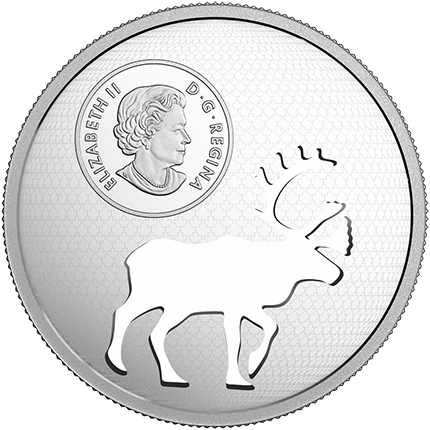 The obverse includes, at upper left, Susanna Blunt’s effigy of HM Queen Elizabeth II, which has appeared on all circulation coins and many commemorative and collector coins since 2003.

You can also find this and other Canadian wildlife series at the website of Coin Update sponsor APMEX.
Share: