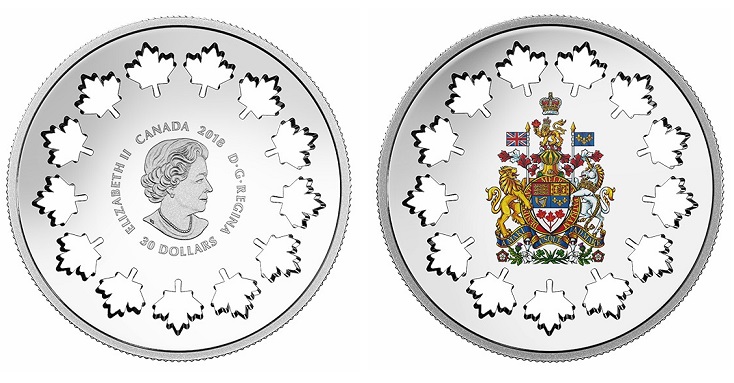 The Royal Canadian Mint has launched (4th July) new silver Proof and colour coins which feature, as part of the design, unique cut-out shapes that represent the country’s national symbol, the maple leaf. Consisting of 13 cut-out maple leaf shapes, the number represents the 10 provinces of British Columbia, Alberta, Saskatchewan, Manitoba, Ontario, Quebec, Newfoundland and Labrador, New Brunswick, Nova Scotia, Prince Edward Island and three territories of Yukon, Northwest Territories, and Nunavut. At the time of Canadian confederation in 1867 under the British North America Act, it consisted of the four provinces of Nova Scotia, New Brunswick, Quebec, and Ontario. The remaining provinces joined Confederation as development moved east and west. Newfoundland was the last province to join in 1949 with Nunavut becoming Canada’s newest territory in 1999. The cut-out or perforated shapes are arranged in a concentric circle which surrounds the colourful Canadian crest or coat of arms at the centre.

The Arms of Canada were first proclaimed in 1921 by King George V (reigned (1910–1936), whose design was largely based upon the Royal Arms of Great Britain. The crest consists of a lion and unicorn (representing England and Scotland) holding the flag of the United Kingdom and the former royal banner of France. The use of a mythical unicorn in Canada’s arms is a subject of great interest as the unicorn was adopted from the ancient arms of Scotland since the 15th century. Its centuries-old depiction with an untethered chain remains one of many intriguing features of the heraldic representations of Canada, its provinces, and territories.

The evolution of Canada’s arms began with adapting the design for use on the reverse side of the 50-cent coin in 1937, although elements of the crest were first on $5 and $10 gold coins issued from 1912 to 1914. In 1957, the Tudor-style crown was replaced by one of St. Edward’s model, the maple leaves turned from green to red, new elements were added, and the design of the Irish lyre was also modified. In 1994, an annulus with the motto of the Order of Canada (“Desiderantes meliorem patriam”) was added behind the shield. 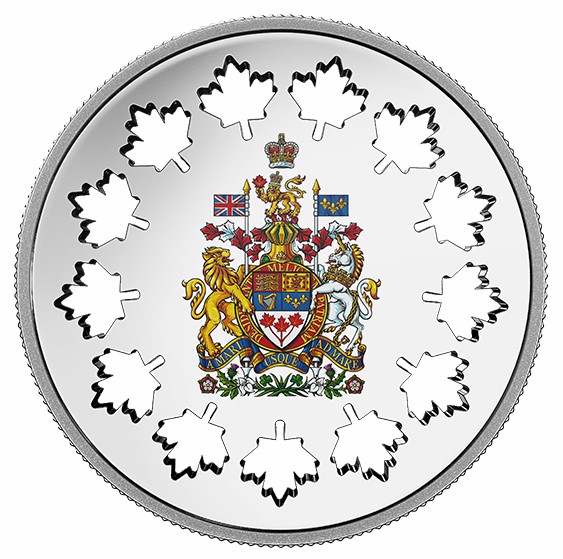 The inclusion of the Canadian crest is blended with precision technology which creates perforations or cut-outs in the shape of small maple leaves which surround the crest — a “first” in terms of a concept for striking coins at the Royal Canadian Mint.

The 13 cut-out shapes form a circle around the current Arms of Canada, which has been engraved to the finest detail and selectively coloured to showcase the beauty of this ancient art of heraldry to full effect. 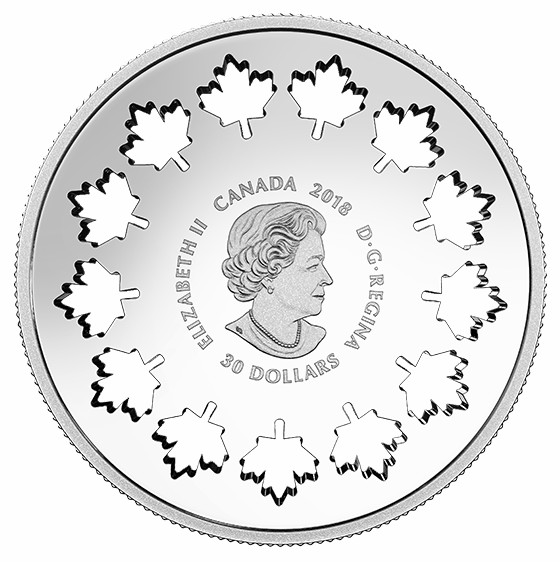 On the obverse is the effigy of Her Majesty Queen Elizabeth II, which was created by Susanna Blunt, and appears at the centre, encircled by an inscription with the denomination and is framed by the circle of cut-out maple leaves. 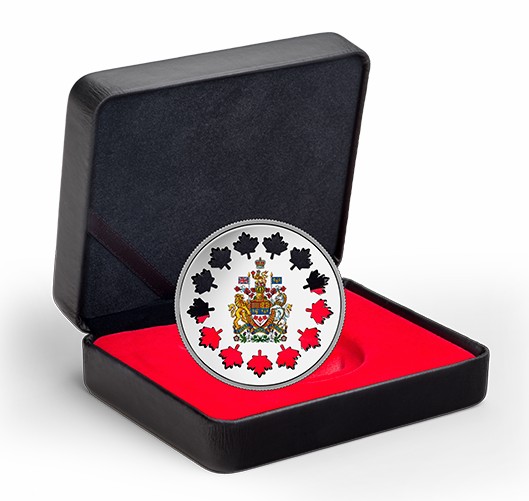 Each coin is encapsulated and presented in a Royal Canadian Mint-branded maroon custom case and is accompanied by a numbered certificate of authenticity. For additional information on this coin and others available from the Royal Canadian Mint, please visit their website.