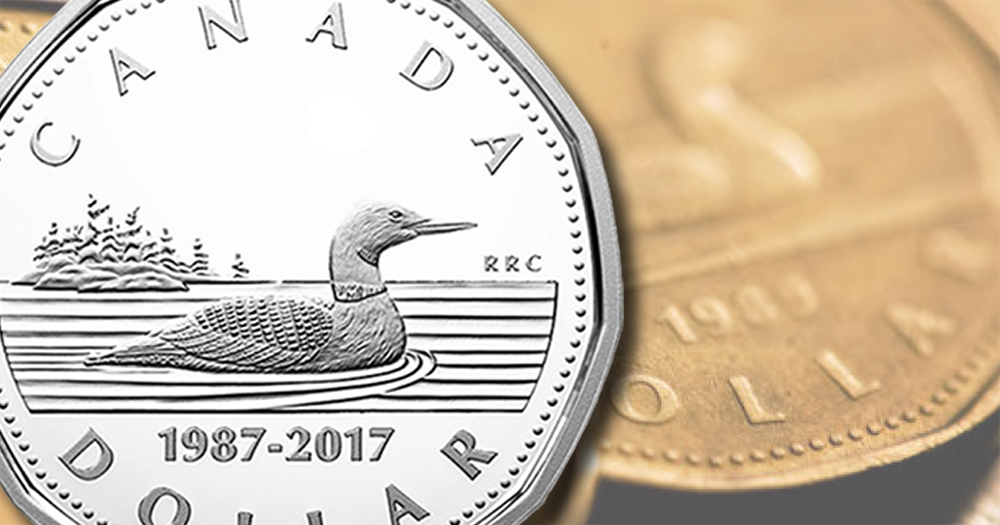 The Royal Canadian Mint have issued new commemorative coins in gold and silver which celebrate the 30th anniversary of the introduction of one of their more innovative coins for general circulation: the golden dollar. Three decades after the coin’s original issuance, it’s hard to imagine Canada’s $1 coin without the solitary loon on its reverse. In truth, it wasn’t the original design intended for the coin. Had the original dies not vanished in transit, Canada’s one-dollar coin would have featured the Voyageur image that first appeared on the dollar coin in 1935. On the 30th June 1987, Canadians were introduced to a new circulation coin. Quickly dubbed the “Loonie,” the distinctively bronze-coloured, 11-sided coin became a daily part of Canadian life, even serving as a lucky talisman for the national hockey team.

The introduction of the coin was the most significant change in Canada’s currency system in almost 50 years. As time passed, in addition to depicting several special designs, the Loonie became known around the world as an innovative trailblazer for its composition and cutting-edge security features. In celebration of the Loonie’s birthday, a special two-coin numismatic set has been prepared, featuring the classic Loonie design and the originally intended Voyageur design. 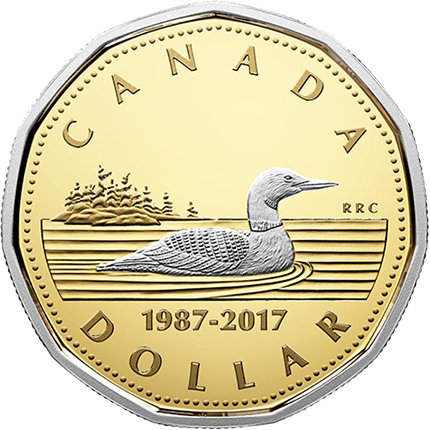 The Loonie design, by Canadian artist Robert-Ralph Carmichael, has become synonymous with Canada’s currency. The iconic, right-facing profile of a common loon floats on a still lake, past the Group of Seven–esque trees rising up on a small island behind it. The entire scene is representative of the lakes that dot the Canadian Shield across much of the nation. Just above the water at far right are the designer’s initials, RRC. At the top of the field is the word CANADA; at the bottom, the word DOLLAR; and between the lower edge of the central image and the bottom of the coin, the commemorative dates 1987-2017. A beaded border surrounds the design. On the gold coin (shown), the rim and the loon are accented in platinum. 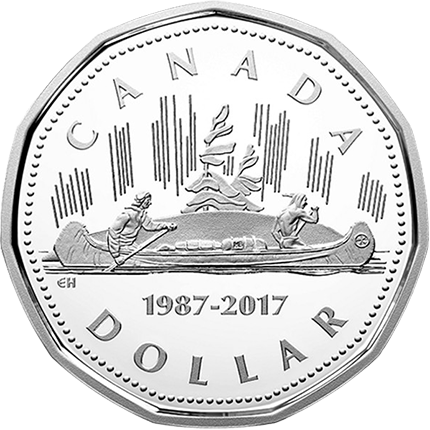 The second coin represents the $1 circulation coin that never was. Much as it appeared on Canada’s silver dollar between 1935 and 1986, the Voyageur design, by sculptor and artist Emanuel Hahn, is a nod to Canada’s early history and the fur-trade era. In it, a canoe moves swiftly toward the right past the wind-swept pines on a low island. A voyageur paddles at the stern, while an Aboriginal paddles at the bow; between them lies a bundle of wrapped furs. Beneath the canoe at far left are the designer’s initials, EH. Stylized vertical rays above the island represent the Aurora Borealis. As with the first coin, at the top of the field is the word CANADA; at the bottom, the word DOLLAR; and between the lower edge of the central image and the bottom of the coin, the commemorative dates 1987-2017. A beaded border surrounds the design. On the gold coins, the rim, canoe, island, and pines are accented in platinum. 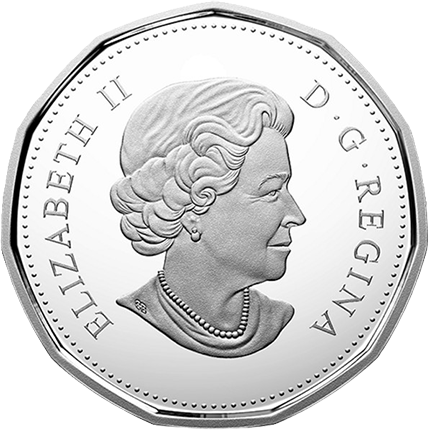 Both obverses feature the effigy of Her Majesty Queen Elizabeth II as designed by Susanna Blunt, bracketed by the legends ELIZABETH II and D.G. REGINA. A beaded border surrounds the design. On the gold coins, the rim and the effigy are accented in platinum.

The silver set has a limited mintage of 10,000, and the gold set has a limit of 350. Both are available at the Royal Canadian Mint’s boutiques in Ottawa, Winnipeg, and Vancouver, as well as through the mint’s global network of dealers and distributors, including participating Canada Post outlets. Please visit the website of the Royal Canadian Mint for additional information on these and other coins on offer.   ❑