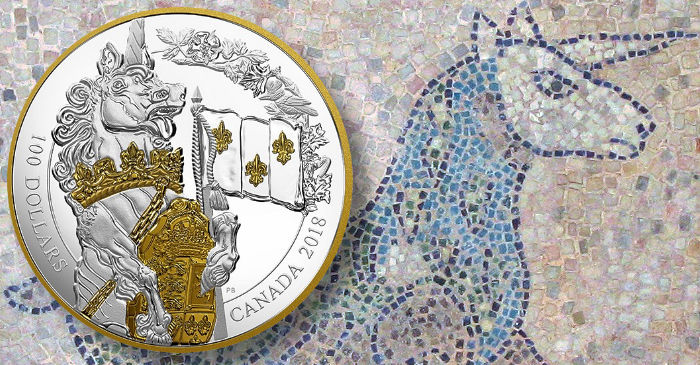 The Royal Canadian Mint has released new ten ounce coins which launches a four-coin series entitled “Keepers of Parliament” and begins with the only mythical supporter of the Arms of Canada. The first coin in the series features the Unicorn, the mythical creature featured rises up in a way that conveys the towering height of its real-life counterpart. It supports the Shield of the Arms of Canada and carries the flag of what was once the Kingdom of France. The unicorn is the heraldic symbol of Scotland in the Royal Coat of Arms of the United Kingdom, and it is one of two supporters of the Arms of Canada. The series of four sculpted coins highlights the elaborate stonework figures that watch over the front doors of Canada’s Parliament.

The Centre Block’s vaulted entrance way was still unfinished when the Peace Tower was inaugurated on July 1, 1927. The Peace Tower’s architect, John Andrew Pearson, envisioned it as a continuously evolving monument and unfinished blocks were deliberately placed throughout the building to encourage future sculptors to add their take on history as it unfolds. It was embellished a decade later, when, led by Dominion Sculptor Cléophas Soucy and his assistant, Coeur de Lion MacCarthy, a team of six sculptors transformed the un-carved blocks of sandstone into an intricate display of floral motifs, animals, and heraldic devices—including the unicorn supporter of the Arms of Canada, which has stood at the east side of the entrance since 1938.

Canada is, in fact, the only country to have an official sculptor and the Dominion Sculptor of Canada is responsible for all new and existing carvings in the parliamentary precinct. In May 1982, the shield-bearing unicorn was the unfortunate victim of vandalism when its spiral horn went missing. With great care, an assistant to the Dominion Sculptor painstakingly carved an exact match, and the unicorn was restored in time for Canada Day celebrations, which take place in July. 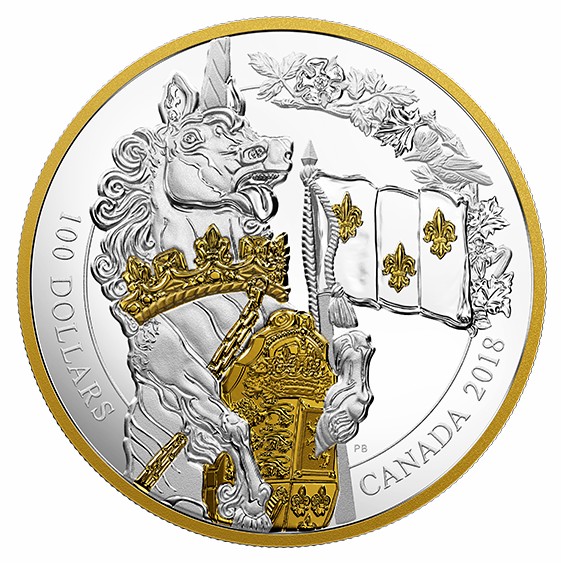 The coin is designed by Canadian artist Patrick Bélanger, and the reverse depicts the unicorn standing before the ceremonial entrance on Parliament Hill, in Ottawa, where the unicorn supporter of the Arms of Canada is carved into the sandstone that lines the east side of the arched entry. This mythical creature rises up in a way that conveys the towering height of 1.8 metres of its real-life counterpart. It carries the shield of the Arms of Canada and also the royal flag of France. Gold plating selectively highlights the chained coronet of crosses and fleurs-de-lis around the unicorn’s neck and the three fleurs-de-lis on the banner. The positioning of the sculpted figure is slightly adjusted to allow the inclusion of an ornamental flourish, whose floral motif is based on a frieze that also adorns the Centre Block’s grand entrance. The reverse includes the face value, 100 DOLLARS, and the words, CANADA 2018.

The obverse features the effigy of Her Majesty Queen Elizabeth II by Susanna Blunt and has been in use since 2003. 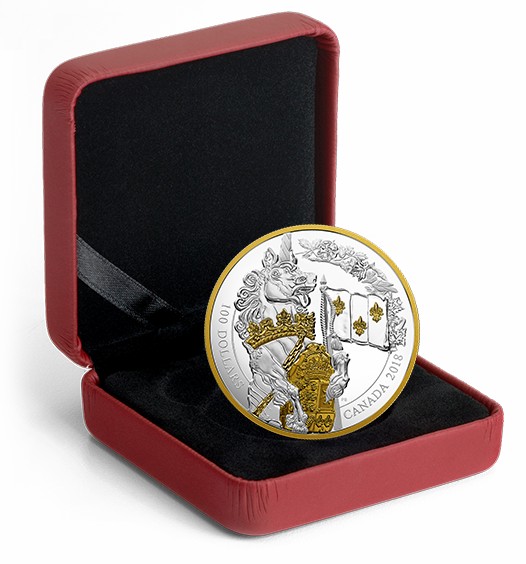 The coin is specially encapsulated and presented in a Royal Canadian Mint-branded custom case and is protected with an outer black box, accompanied by a numbered certificate of authenticity. The remaining three coins in the series, which are available by subscription, will be released later in the year. The next coin expected to be available will be the Beaver in August 2018, the Soldier in October 2018, and the Lion in December 2018. For additional information on this coin and other coins available from the Royal Canadian Mint, please visit their website.