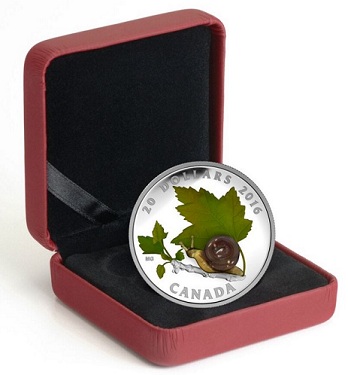 The Royal Canadian Mint has launched a new series of silver coins featuring nature’s littlest wildlife creatures uniquely rendered with the aid of Venetian glass. The first coin in this three-coin series begins bears a depiction of the common land snail in its ideal habitat.

Snails are small-to-medium sized molluscs that are generally split into three groups: land snails, sea snails, and freshwater snails. There are nearly 1,000 species of snail spread throughout the world’s continents, including many in North America. 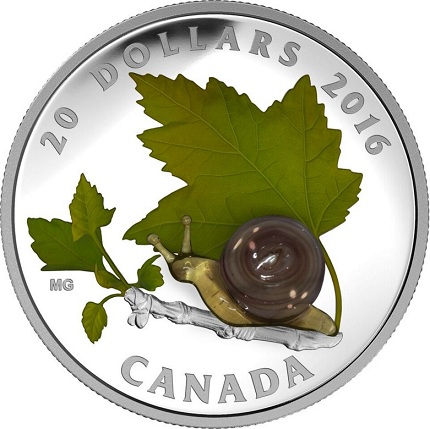 The coin is designed by Canadian artist Maurice Gervais and captures the delicate beauty of a snail in the Canadian landscape. The use of paint over engraving adds a life-like quality to the branch and leaves of a mountain maple tree. The leaf looms large in the background, establishing scale behind the spiral snail shell, which is beautifully fashioned in Venetian glass. 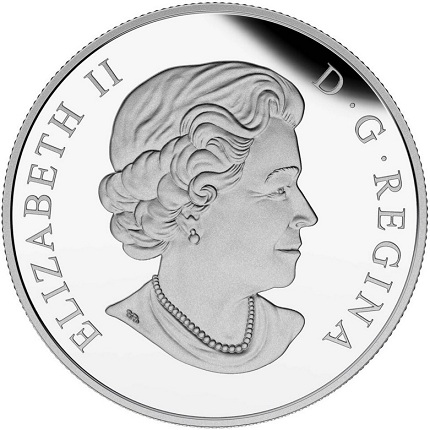 The obverse features the present effigy of Her Majesty Queen Elizabeth II, which was created by Susanna Blunt and has been used on most Canadian coinage since 2002. 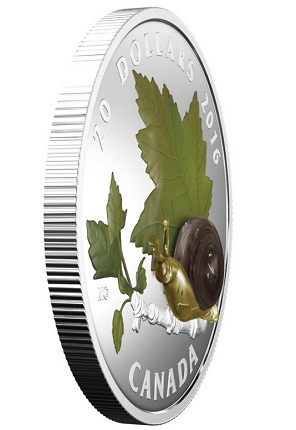 Each of the glass pieces included on these coins is unique and handcrafted by master glassmaker Giuliano Donaggio of Murano, Italy.

For more information on this and other coins on offer by the Royal Canadian Mint, please visit their Web site. Shipment for this series is only available in Canada and the USA. The coin can also be purchased in RCM retail outlets in Ottawa, Vancouver, and Winnipeg.