The Royal Canadian Mint have issued the second coin in their exciting “Prehistoric Animals Series” which explores and highlights those extinct creatures which once inhabited the North American continent and the fossils discovered on Canadian territory. The second coin features the scimitar cat (Homotherium serum) which was arguably one of the most awe-inspiring animals of the Ice Age. Famous for its knife-like fangs, the scimitar cat’s teeth were shorter than those of the better known sabre-tooth cat, Smilodon fatalis, but were equally lethal. Its sabres were coarsely serrated, just like a steak knife, making them perfectly suited for slicing through the soft flesh of its prey. 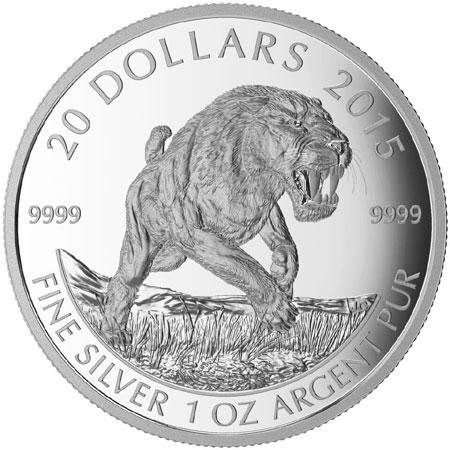 This fierce feline was a master at pursuing prey, which consisted of ungulates including horses and camels. The scimitar cat would charge from behind a bush or tall grasses with blinding swiftness, bowl over its intended prey and slash the throat with its lethal canines. Then, once the uproar subsided, the cat dragged its latest meal to its den. This fascinating cat ranged from Beringia, a prehistoric grassland region from Siberia to Alaska too dry for glaciers, all the way to southern North America by way of the Yukon, the Northwest Territories, and Alberta. Having gone extinct sometime between 13,000 and 11,000 years ago, the scimitar cat’s demise was likely linked to that of the large Ice Age herbivores.

The scimitar cat was roughly the size of a lion, but with a lighter body that gave it more running flexibility than its Ice Age cousins, other sabre-tooth cats and the American lion. It had a short tail like a lynx, and long, powerful forelimbs but slightly shorter hind legs that gave it a hyena-like stance. 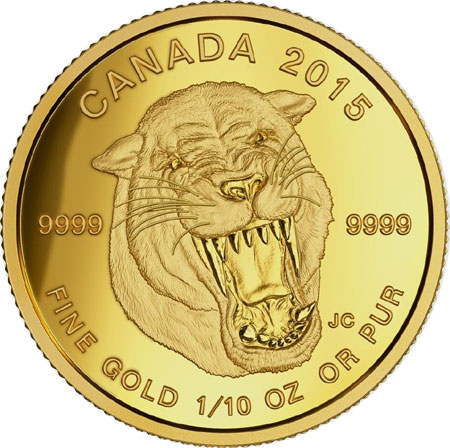 The coins, one silver and one gold are designed by Royal Canadian Mint artist Julius Csotonyi. The reverse of the silver coin includes a fine depiction of the perceived appearance of the scimitar cat. To ensure a high degree of scientific accuracy, the design on both coins was verified by palaeontologists of the Royal Tyrrell Museum in Alberta. The scimitar is depicted on the prairies of its habitat – in a readying position to lunge for what might be its prey. The denomination and the silver coin’s fineness is also included on the reverse. The gold coin includes an excellent and ferocious head-shot depiction of the scimitar, roaring – with fangs prominently displayed!  The obverse of both coins includes the effigy of HM Queen Elizabeth II as designed by Susanna Blunt and used on all circulation and many commemorative coins since 2003.

The first coins in this series, the Wooly Mammoth sold out shortly after its release last year. These new coins are available as a two-coin set and by subscription only to both Canadian and US residents.