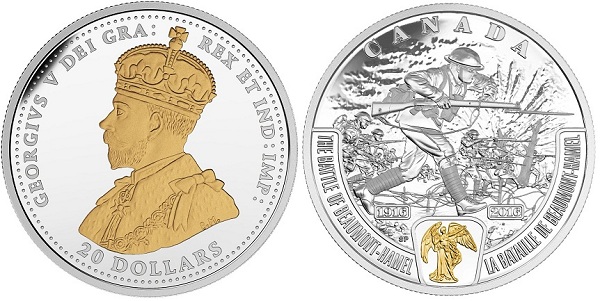 The Royal Canadian Mint has shared the following press release:

“Every July 1, Canadians celebrate the founding of their country and the democratic values for which it stands, but it is also a time to remember that on that day in 1916, the brave men of the Newfoundland Regiment fought and gave their lives for the same ideals at the Battle of Beaumont-Hamel,” said Seamus O’Regan, Member of Parliament for St. John’s South – Mount Pearl. “Beaumont-Hamel is a name that represents courage, sacrifice, and sorrow and the Government of Canada is proud that the Royal Canadian Mint has created a permanent reminder of this unforgettable chapter in the First World War and in the building of our nation through a beautiful silver collector coin.”

“The Mint has a long history of honouring Canada’s veterans and their sacrifices through coins which share their incredible, inspiring stories with Canadians from coast to coast to coast and collectors around the world,” said Sandra Hanington, President and CEO of the Royal Canadian Mint. “As Canada marks the 100th anniversary of the Battle of Beaumont-Hamel, the Mint is proud that we can play a role in honouring the memory of the men of the Newfoundland Regiment by crafting this very special coin.”

“We are proud to accept this special commemorative coin issued by the Royal Canadian Mint to honour the service and sacrifice of Newfoundland’s native sons on the battlefield near Beaumont-Hamel, France,” said Frank Sullivan, President of The Royal Canadian Legion, Newfoundland and Labrador Command. “It is through initiatives like these that our heroes are remembered and kept in the public eye in recognition of their bravery for the people of Newfoundland and Labrador.” 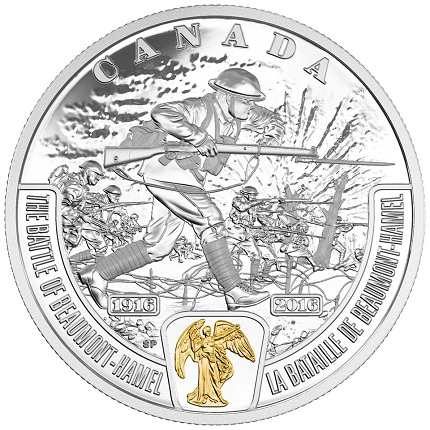 Canadian artist Silvia Pecota designed the 99.99% pure silver coin which poignantly captures the bravery and tragedy of the Battle of Beaumont-Hamel where the soldiers of the Newfoundland Regiment participated in the first ground attack of the Somme Offensive on July 1, 1916. Only 30 minutes into this assault, all but 68 of the 801-man regiment were cut down by enemy fire.

The reverse design of the coin shows a young soldier courageously advancing toward enemy lines across the battle-scarred terrain of No Man’s Land. The intensity of the artillery and machine gun fire that awaited the Newfoundlanders is evident throughout this intricately engraved scene that includes a background engraving of the gnarled “Danger Tree,” where they faced the most intense fire. Selective gold plating showcases the winged figure of “Victory” as it appeared on the Victory Medal, which was awarded to the allied soldiers of the First World War. 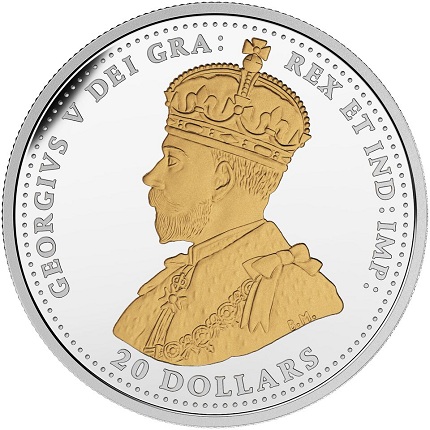 The obverse of the coin features the gold-plated effigy of King George V, the reigning monarch during the First World War, who also granted the “Royal” designation to the Newfoundland Regiment in late 1917, in recognition of its battlefield achievements.

The 2016 $20 Fine Silver Coin – First World War Battlefront Series: The Battle of Beaumont-Hamel has a limited mintage of 10,000 and retails for $109.95. It has been available for purchase since June 7, 2016 by contacting the Mint at 1-800-267-1871 in Canada, 1-800-268-6468 in the US, or online at www.mint.ca. The coin is also available at the Royal Canadian Mint’s boutiques in Ottawa, Winnipeg and Vancouver, as well as through the Mint’s global network of dealers and distributors, including participating Canada Post outlets.

About the Royal Canadian Mint

The Royal Canadian Mint is the Crown Corporation responsible for the minting and distribution of Canada’s circulation coins. An ISO 9001-2008 certified company the Mint is recognized as one of the largest and most versatile mints in the world, offering a wide range of specialized, high quality coinage products and related services on an international scale. For more information on the Mint, its products and services, visit www.mint.ca.