On October 4 the Royal Canadian Mint launched the final coin in the popular series entitled “Tall Ships Legacy,” which has focused on a variety of ships that are associated with Canada’s own maritime history or that have contributed to Canadian exploration. The last ship to be highlighted in this gold-coin series is the HMS Discovery, an especially important ship to Canada, the West Coast of North America, and the United States in general due to the valuable information gathered during her exploration of the region. (Scroll down to “The Story of the Discovery” for more.) 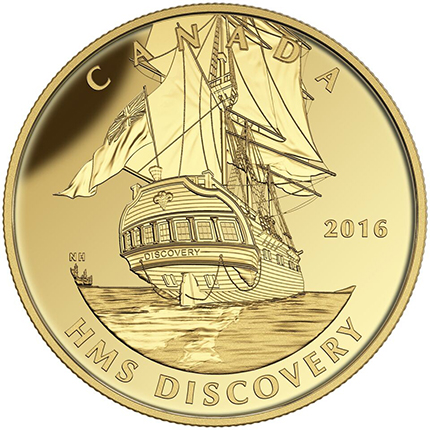 The reverse design, by Canadian artist Neil Hamelin, features a stern view of HMS Discovery during her famous 1791–1795 expedition in the Pacific. With the wind spilling from her topsails, the three-masted ship is a majestic sight as she sails along the rugged, tree-lined coast of present-day British Columbia. The upper portion of the ship’s rudder and her stern chasers are evident above the water, while the eye sweeps up past the captain’s cabin and stern decorations to the large Red Ensign of the British Royal Navy flapping in the wind. A glimpse of the starboard side reveals more of the wooden barque’s distinctive appearance and details of her rigging, as recreated through meticulous engraving. 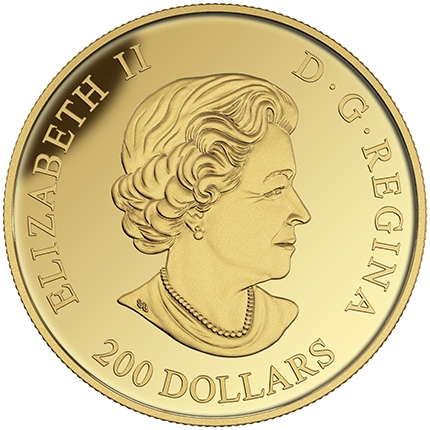 The obverse side includes the fourth effigy of HM Queen Elizabeth II to appear on all Canadian circulation and most commemorative coinage since 2003, designed by Susanna Blunt. The denomination, 200 DOLLARS, is placed just below the Queen’s image.

This particular and final coin in the series also commemorates the 225th anniversary of HMS Discovery’s 1791–1795 expedition, which produced an extensive survey of what is known today as Canada’s West Coast. The coin is available and presented in a Royal Canadian Mint–branded maroon clamshell within a protective black outer sleeve. For more information on this and other coins offered by the Royal Canadian Mint, please visit their website. Also available at selected RCM retail outlets; international orders dispatched where applicable. 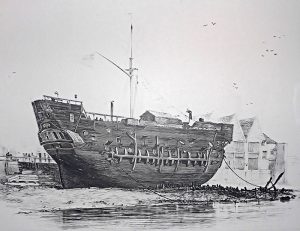 The Story of the Discovery

Originally built in Rotherhithe, a port district in southeast London, England, and launched in 1789 as part of the Royal Navy, the fleet’s new ship was named after the previous HMS Discovery—one of the ships on James Cook’s third voyage to the Pacific Ocean, where he became the first European to establish direct contact with the Hawaiian Islands. The newer Discovery was commissioned in 1791 for the expedition organized by Captain George Vancouver (1757–1798). The expedition, which would last more than four years and travel to five continents, generated a substantial amount of documentation and maps of the countries, empires, and coasts—documentation that would be referenced for the next 100 years.

The HMS Discovery like her sister, HMS Chatham, was a full-rigged ship with a standard crew of 100. They had been especially designed and built for a voyage of exploration to the southern whale fisheries in the Antarctic and southern oceans, with both ships stopping at Cape Town, South Africa, before exploring the southern coast of Australia. On their way to the Northwest Pacific from Australia, the ships sailed for Hawaii, where Capt. Vancouver met with Hawaii’s famed King Kamehameha I (c. 1736–1819). Arriving in the Northwest Pacific, Vancouver had the chance to explore the coastlines of the region. Many territories at the time were still under Spanish authority, and extending British sovereignty over these lands was a prime objective of Vancouver and his expedition.

In 1795, the Discovery and the Chatham sailed to St. Helena, where they captured a Dutch “Indiaman” (a ship in the service of the Dutch East India Company). Unknown the captain and crew, the Dutch Batavian Republic was officially at war with Great Britain. In 1798, the HMS Discovery was in need of repair and refit, and due to the war was refitted as a bomber vessel and recommissioned. HMS Discovery participated in the Battle of Copenhagen, in which the British fleet defeated the Danish navy. The Discovery also served under the famed Admiral Horatio Nelson (1758–1805) and was part of the defense of the southern British coast when an enemy flotilla off the coast of Boulogne attacked in August 1801. Although the HMS Discovery did not see action during the Battle of Trafalgar in 1805, she remained in the service of the Royal Navy until 1807, when she was commissioned as a hospital ship. This would be her function for the next eight years, until she returned to ordinary service in 1815.

The need for convict ships to transport prisoners from Great Britain to Australia was acute in the early part of the 19th century, and in 1817, the HMS Discovery was commissioned to meet this very need. After 1831, however, little is known of the commissions of this extraordinary ship whose illustrious past held scant regard for her fortunes or future function. Sadly, she was officially decommissioned in Deptford, a port town in southeast London. She was broken up there in 1834, ending a remarkable career at sea but leaving behind the contributions she had made to discovery and diplomacy.