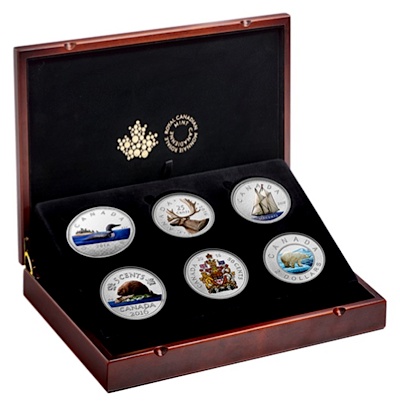 The Royal Canadian Mint has issued the sixth and final coin in its colorful and popular “Big Coin” series, which brings to life each coin presently in circulation as a large five-ounce silver piece. This coin re-creates the “toonie,” a two-dollar bi-metallic coin carrying an image of a polar bear, first introduced into circulation in 1996 to replace the bank note of the same value. This year, it celebrates its 20th anniversary of issue.

The reverse side was designed by Brent Townsend. The coin entered circulation in February of 1996 with over 375 million coins produced, and it was relatively well-received by the public. With the $2 bank note gradually being removed from use, the coin eventually became widely used.

The reverse depicted a polar bear in its natural habitat and within a couple months the coin was referenced with the colloquial name, the “toonie.” This was a reference to the one-dollar coin introduced in 1986, which became known as the “Loonie,” due to the loon bird depicted on the reverse.

Initially, the new $2 coin was called a “doubloon,” as in a “double loon” coin, but in time the reference of “toonie” (“two loonies”) took root and the bi-metallic coin has been as such ever since. There were even publicity campaigns to “name the polar bear” depicted on the reverse, with suggestions from “Nanuq,” which referenced its Inuit name, to Churchill,  a reference both to Winston Churchill and to the common polar bear sightings in Churchill, a city in the province of Manitoba. 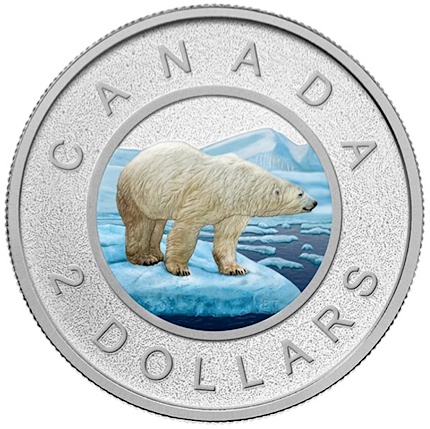 The coin’s reverse includes the original design by Townsend and is intricately colored to enhance the motif highlighting the blue water and bright white ice. The obverse features the effigy of Her Majesty Queen Elizabeth designed by Susanna Blunt.

The coins are available as a six-coin series, with each piece being encapsulated and presented in a Royal Canadian Mint-branded handsome wood case. The two-dollar coin is the last issue in the five-ounce silver series, which includes re-creations of circulating coins ranging in value from five cents to two dollars. For more information on this and other coins offered by the Royal Canadian Mint, please visit their Web site.