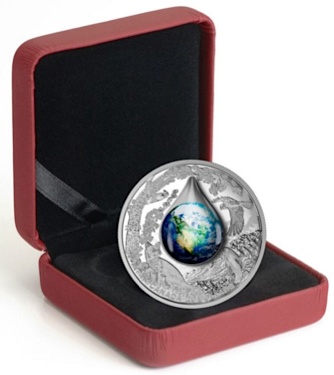 The Royal Canadian Mint has issued a new coin focusing primarily on our planet, Mother Earth. Every person, animal,  and plant is dependent upon Mother Earth and the water she provides. With the planet’s countless bodies of water, it can be easy to take such an aquatic bounty for granted, but a lack of daily attention is being paid to this one element of life which must not be ignored.

In many parts of the planet, clean drinking water is either in short supply or not present in a quantity appropriate to sustain life, as fresh water makes up a very small fraction of all water on the planet. While nearly 70 percent of the world is covered by water, only 2.5 percent of that is fresh. The rest is saline and ocean-based and still. On top of that just 1 percent of our freshwater is easily accessible, with much of it trapped in glaciers and snowfields. 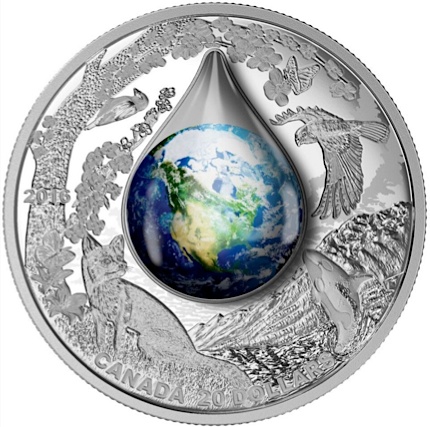 Pollution of our water sources is also a prime concern in both developed countries and emerging economies, with many water authorities placing high priority on combating man-made and natural causes of polluted water sources. With the Human Right to Water and Sanitation declaration of 2010, the World Health Organisation has decreed that everyone has the right to water and sanitation services that are physically accessible within, or in the immediate vicinity of, their household, workplace, or educational and health institutions. Relatively small adjustments to water and sanitation services can ensure that the needs of the disabled, elderly, women, and children are not overlooked, thus improving dignity and health for all. 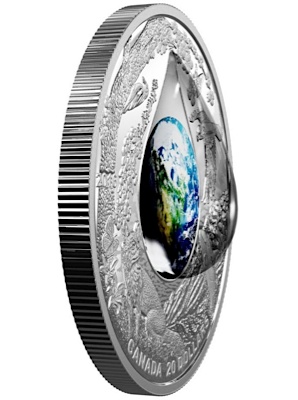 The coin is designed by Canadian artist Alexandra Lefort and features a domed, 3-D droplet with an inset image of the earth, a “first” for the Royal Canadian Mint. The droplet conveys the importance of water to all life on this planet. The space around the water droplet brings the design’s focus to Canada, with its diverse fauna and flora.

The lower left section of the design represents the terrestrial environment with a red fox gazing at the water droplet. Above the fox is a red-headed woodpecker on a western flowering dogwood tree; an American kestrel is also depicted, representing the aerial environment. Below, an orca breaches over the waves with mountains in the background. 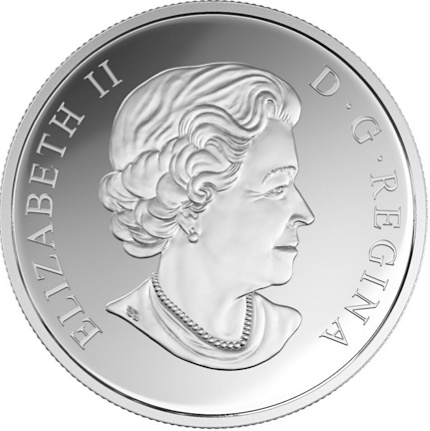 The obverse includes an effigy of HM Queen Elizabeth II as designed by Susanna Blunt and used on many Canadian collector coins and all circulation issues since 2002.

The coin is available in-store and through on-line ordering. For more information on this and other coins offered by the Royal Canadian Mint, please visit their Web site. International orders will be dispatched where applicable.