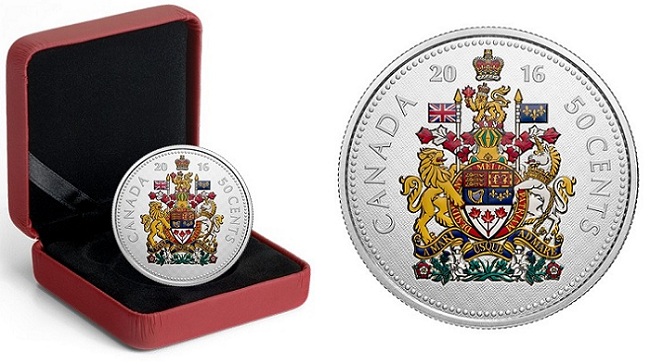 The Royal Canadian Mint has issued the latest issue in their “big coin” series. Each currently circulating Canadian coin denomination, from the 5-cent piece to the 2-dollar value, has been rendered as a unique five-ounce silver piece that employs Canada’s recognizable design motifs.

The latest release in the series features the 50-cent coin design. Though it is arguably the country’s least-used denomination, it carries Canada’s most regal and stately reverse motif. The crest design was initially issued in 1937 as part of the substantial change in circulation coinage for the reign of King George VI, the first Head of the Commonwealth. The coat of arms, which is registered with the College of Arms in London, includes representations for the peoples of England, Scotland, Ireland, and France, settlers who comprised much of Canada’s population in the years leading to confederation in 1867.

In the Royal Warrant of 1868, Queen Victoria (created Queen of the Dominion of Canada) authorized the four arms of the first provinces to be quartered for use on the Great Seal of Canada. The addition of the maple leaf, symbol of Canada, and of a rampant lion and unicorn on each side holding banners, completed the coat of arms, which was designed by George Kruger-Gray.

In 1959, the Canadian crest underwent a complete re-design by Royal Canadian Mint engraver Thomas Shingles, and saw the addition of a lion passant positioned to the top of the crest and crowned. This design has been in use ever since, and is now the featured design on this exceptional super-sized coin. 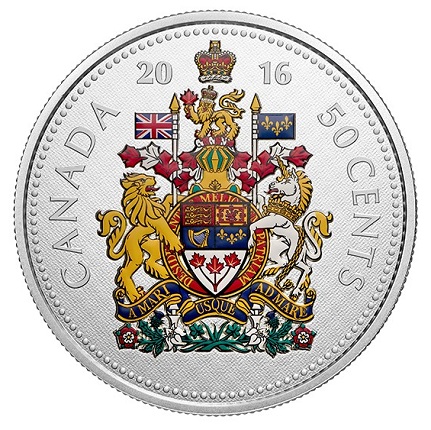 The reverse includes a yellow lion holding a blue, white, and red Union Jack flag on the left and a white unicorn holding a blue flag with three yellow French fleurs-de-lys on the right. At the center is a shield divided into five sections bearing historical emblems of England, France, Scotland, and Ireland, as well as a sprig of three red maple leaves. The multi-coloured shield is encircled with a red ribbon representing the Order of Canada and bearing the motto Desiderantes meliorem patriam, which means “desiring a better country.”

The shield is surmounted by a yellow, green, and black royal helmet within a garland of red maple leaves, upon which stands a yellow crowned lion holding a red maple leaf. St. Edward’s Crown, symbolizing Canada’s constitutional monarchy, rests above the lion, which symbolizes Canada’s sovereignty. The motto A Mari usque ad Mare (“from sea to sea”) appears in yellow on a blue ribbon below the shield, along with a “compartment” or garland composed of the floral emblems of England, Scotland, France, and Ireland. The reverse is also engraved with the word CANADA, the date, 2016, and the face value of 50 CENTS. 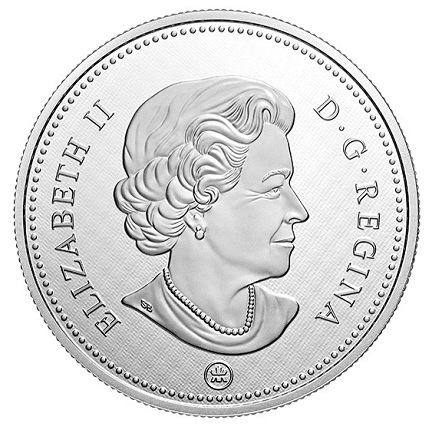 The obverse features the effigy of Her Majesty Queen Elizabeth II by Susanna Blunt, which has been used on all circulation coins and many commemorative issues since 2003.

The coin is part of a six-coin set comprising the five remaining denominations, all issued with their respective face values as five-ounce silver pieces. The coin is available separately or as a subscription to Canadian and United States collectors. For more information on this and other coins offered by the Royal Canadian Mint, please visit their Web site. International sales will be dispatched where applicable.