The Royal Canadian Mint have launched a set of collector’s coins to mark the last year of the Canadian one cent coin, which was officially retired earlier this year with a special ceremony to strike the very last copper plated steel cent.

It all began more than a century ago as a numismatic journey and Canada’s love affair with the first of their nationally produced coins when on the 2nd January 1908, Lady Grey, the wife of Canada’s Governor-General struck the first one cent coin at the new Royal Mint facility located in Ottawa. Since then, Canada’s one cent or “penny” coin has undergone several changes from a decreased size in 1920 to adopting the more internationally recognized maple leaf motif designed by artist George Edward Kruger-Gray in 1937. A commemorative design celebrating Canada’s Centennial of Confederation was introduced in 1967, this one-year-only coin was designed by legendary Canadian artist Alex Colville featuring a Rock Dove. Finally, after public consultation and a study undertaken by the Canadian Finance Ministry, it was decided that the one cent coin was no longer economically viable to continue the issue of the denomination. On the 12th May of this year, the iconic coin was struck for the last time. 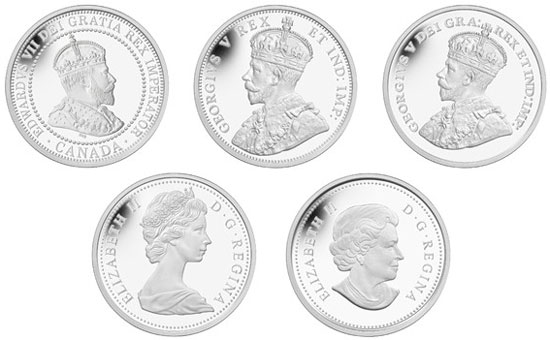 The tribute set contains five pure silver coins with the year of issue, “2012” – all with a one cent face value and includes the monarchs on the obverse when the coin had undergone specific changes. The set comprises the 1908 replica coin, that of the first year of Canadian produced cents, the 1920 large cent replica and the 1920 smaller cent replica. The 1967 cent centennial replica and finally, the last of the Kruger-Gray maple leaf design completes the set. 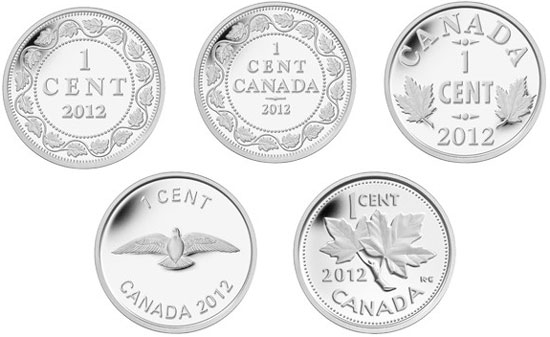 Each coin has the same diameter of the actual one cent coin, 19.1 mm and is struck to proof quality. The Royal Canadian Mint have authorized 5000 sets for world-wide distribution.The product status is currently indicated as “Awaiting Stock”.

For more information on this and other coins offered by the Royal Canadian Mint, please visit their website at: http://www.mint.ca/store/buy/new-releases_coins-cat410002 international orders fulfilled.