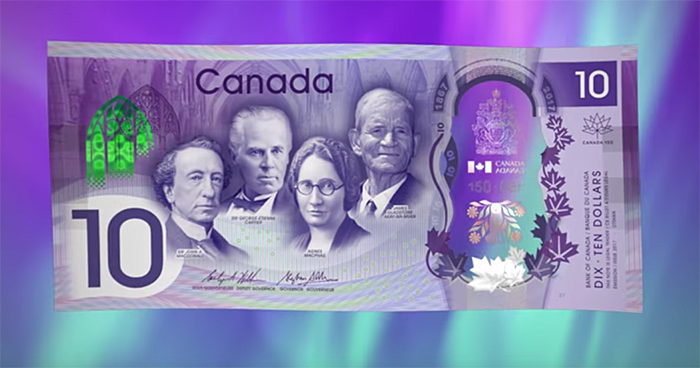 The Bank of Canada have issued a new commemorative banknote that celebrates the country’s 150th anniversary of Confederation. This new and unique note celebrates Canadian history and culture along with the events leading up to this auspicious anniversary. It includes a variety of Canadian symbols, personalities, state emblems, and images that are quintessentially Canadian in reference.

On the face are four persons who have made significant contributions to Canadian culture, politics, and history:

Sir John A. Macdonald (1815–1891). Regarded in history as the Father of Confederation and Canada’s first prime minister (1867–73 and 1878–91). Under Macdonald’s leadership and vision, the Dominion of Canada was founded, grew, and expanded until it stretched from sea to sea to sea.

Sir George-Étienne Cartier (1814–1873). Remembered as a principal architect of Canadian federalism and a proponent of confederation as a means of safeguarding French Canada and other minorities. Cartier led Quebec into the Dominion and later participated in the expansion of Canada west to the Pacific and north to the Arctic Ocean.

Agnes Macphail (1890–1954). A champion of equality and human rights who, in 1921, became the first woman elected to the House of Commons in Canada. Entering politics to represent the interests of farmers in her riding, Macphail became an advocate of the working class and defender of marginalized groups such as women, miners, immigrants, and prisoners.

James Gladstone (1887–1971). Gladstone was a Cree by birth but was adopted by a member of the Kainai First Nations and given the Blackfoot name Akay-na-muka, meaning “Many Guns.” Gladstone committed himself to the betterment of indigenous peoples in Canada. In 1958, Gladstone was elected to become Canada’s first senator of First Nations origin.

Included in the design are the names of Canada’s provinces and territories and the dates when they entered Confederation, repeated in English and French across the top and bottom of the large window. The order in which the names appear follows the official order of precedence and lists the provinces followed by the territories.

In the background, the Hall of Honour is illustrated and is part of the central corridor of the Centre Block on Parliament Hill. This neo-Gothic passageway, with its remarkable ribbed vault ceiling, leads from Confederation Hall to the Library of Parliament. The House of Commons is directly to its west, the Senate Chamber to its east. The Centre Block is where national issues are considered and examined, and where legislation is introduced, debated, and passed into law.

The note is bordered on the top and bottom with the Assomption sash, also known as the arrow sash, an important cultural symbol of the Métis people. The sash also has significance to French-Canadian culture. Worn by habitants, the sash became a hallmark of the voyageurs and fur traders in the 18th century.

The clear polymer window is surrounded by thirteen maple leaves, symbol of the country, intertwined by their stems representing connection and, overall, confederation. The window contains holographic applications, including three visible images that show the official coat of arms of Canada with the distinctive Canadian flag, adopted in 1965, just below. The commemorative inscription of 150 forward and reverse is placed below the flag. Below the commemorative number is the image of the Owl’s Bouquet, a stone-cut and stencil print by acclaimed Inuit artist Kenojuak Ashevak (1927–2013). Ashevak is perhaps the best-known Inuit artist, and her work helped to introduce Inuit art to the world. Ashevak lived and worked in Cape Dorset, Nunavut, the last territory to join Canada’s Confederation, in 1999.

The back of the note includes many iconic images associated with Canada’s vast territory and natural landmarks. The Coast Mountains are shown in the first panel. These iconic peaks overlook Vancouver, British Columbia, and were given the name “the Lions” by John Hamilton Gray, a Father of Confederation who later served on the Supreme Court of British Columbia. The local Squamish people know the peaks as “Ch’ich’iyúy Elxwíkn,” or the Twin Sisters. The view of these peaks shows Capilano Lake in the foreground, named after the supreme chief of the Squamish peoples.

The second panel depicts Canada’s ever-present stalks of wheat, ripened on a family farm outside of Regina, Saskatchewan. Emblematic of the nation’s prairie provinces, wheat is one of the most important cultivated crops in all of Canada and is exported in great quantities to all corners of the world. The bulk of Canadian wheat is grown in the prairie provinces of western Canada, Saskatchewan being the largest producer, followed by Alberta and Manitoba.

The third panel includes an image of a forest that stands on the bank of the Kipawa River, with a stream of fresh water rippling across the ancient rock of the Canadian Shield in the parc national d’Opémican in the Abitibi-Témiscamingue region of Quebec. Stretching from northern Alberta to Newfoundland and Labrador and from central Ontario to the Northwest Territories and Nunavut, the Shield covers 4.8 million square kilometres (1.85 million square miles)—roughly half the total land area of Canada.

The fourth panel appropriately highlights the Atlantic Ocean, and in this image meets the rocky coast of Cape Bonavista in Canada’s easternmost province of Newfoundland and Labrador. The nearby town of Bonavista was established in the late 1500’s and is one of the earliest European communities in North America. The Cape was a possible landing site of John Cabot, a Venetian navigator and explorer under the commission of Henry VII of England who sailed to North America in 1497.


As the backdrop to all the images, the Aurora Borealis is depicted dancing above Canada’s largest national park, Wood Buffalo. This incredible natural preserve is one of the largest national parks in the world, straddling the boundary between Alberta and the Northwest Territories. Designated in 2013 by the Royal Astronomical Society of Canada as the world’s largest dark-sky preserve, Wood Buffalo is one of the most ideal places on Earth to see the natural phenomenon known as the Northern Lights.

The elements of the note, particularly the reflective elements like the Owl’s Bouquet, are clearly visible in this video from the Bank of Canada:

The $10 note retains the same colour scheme of purple and corresponding variations as the circulation-type note and is also printed on polymer material, as used for all circulation banknotes in Canada since 2013. The dimensions of the note are 152.4 x 69.85 mm. It is the Bank of Canada’s fourth commemorative banknote; the first such note, denominated $25, was issued in 1935 and celebrated the Silver Jubilee of HM King George V. The second commemorative note, denominated $1, was issued in 1967 to celebrate the centennial anniversary of Canadian Confederation. The third note was more recently issued in 2015 to mark the Queen’s milestone day of achieving the longest reign on the 9th September.

The new $10 note will be issued throughout the country via commercial banks and post offices for its face value and is intended to circulate alongside the regular issue $10 note. All Bank of Canada banknotes remain redeemable after their withdrawal and can be exchanged for current legal-tender currency without time limit. Please visit the website of the Bank of Canada for more information on this and other Canadian banknotes.   ❑