The Royal Canadian Mint has unveiled (12th May) a new series of coins celebrating the 50th anniversary of the television debut of Star Trek, which aired its first episode in September of 1966.

The series, now considered a cult-classic with tens of millions of admirers worldwide, was created by screenwriter Gene Rodenberry (1921 – 1991); it told the story of the crew aboard the Starship U.S.S. Enterprise, whose mission was “to boldly go where no man has gone before.” The fictional space travelers were headed by Captain James “Jim” Tiberius Kirk, who was born in the year 2233 and was portrayed by Canadian-born actor William Shatner.

Kirk’s character was often balanced by the presence of Mr. Spock, a First Officer whose calm, rational personality and demeanor was attributed to his half-human/half-Vulcan background. Mr. Spock was portrayed by Leonard Nimoy, who donned pointed ears and eyebrow enhancement to distinguish himself as half alien.

The show was praised by civil rights activists at the time for including both a black actress and Asian actor as leading or recurring cast members, something that had not occurred previously on any mainstream American television show.

The first season of Star-Trek aired on the NBC network and was produced by Desilu Studios, who found the costs of production beyond their means. The second and third seasons were taken over by Paramount Studios; although the story lines were exciting and the production was often cited as first-rate, the ratings were low and after a total of just seventy-nine episodes, the series was cancelled.

Star Trek’s following continued to grow, however, as the show was broadcast in syndication. Eventually, the popularity of the syndicated series resulted in significant franchises consisting of five additional television series, no less than twelve feature films, numerous books, games, and toys — and now a series of colorful and precious metal Proof coins. The original Star Trek is now considered as one of the most popular and influential television series of all time. 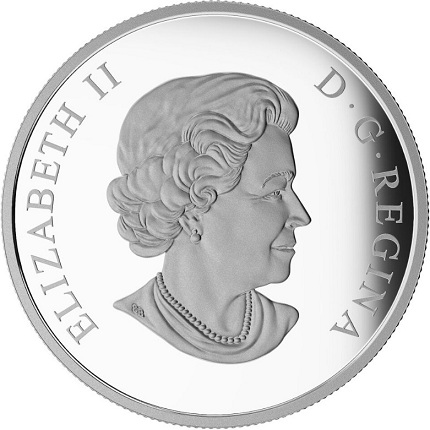 The coins are issued in both silver and gold. Their obverses include the current effigy of HM Queen Elizabeth II as designed by artist Susanna Blunt, which has been used on all Canadian circulation coins and many commemorative issues since 2003. 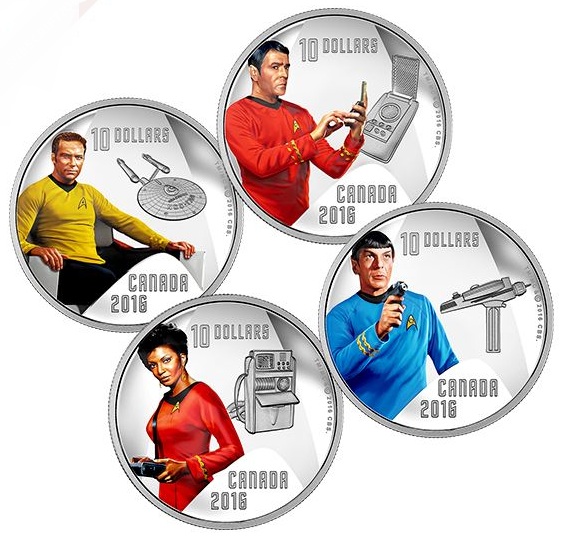 The $10 denominated series includes a total of four coins. The first features a colored engraving of Captain James T. Kirk, commander of the U.S.S. Enterprise, with an outline of Starfleet’s Delta Shield insignia. Other favorite characters include Scotty and Communicator (issued from July 5), Communications Officer Uhura and Tricorder (issued from August 2), and Mr. Spock and Phaser (issued from September 6). This subscription is available to Canadian and U.S. destinations only. 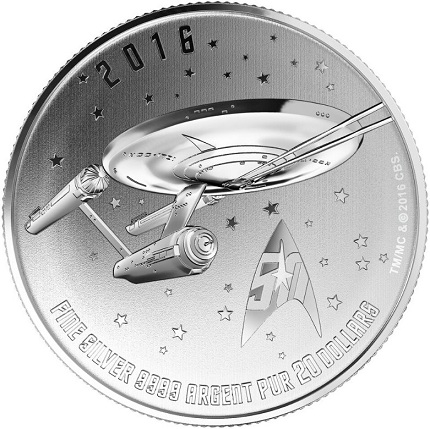 The latest issue of the Mint’s popular fine silver $20-for-$20 coins celebrates the U.S.S. Enterprise. The silver coin features the famed starship in attack mode, with her two phasers blasting into space. The scene is enhanced by a stylized Delta Shield incorporating the number 50, and coin lettering rendered in a Star Trek font. 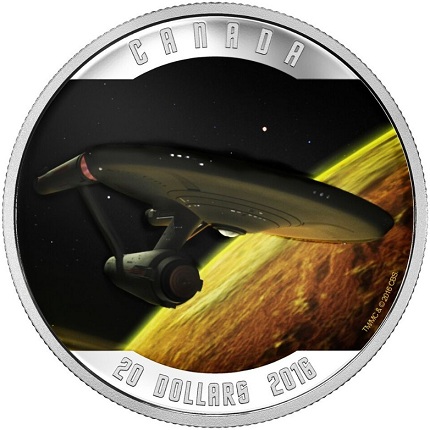 The reverse design of the single $20 silver coin features a colorful tribute to the U.S.S. Enterprise which recreates a scene from the 1968 episode “I, Mudd.” The image portrays the famed starship as it approaches a Class K planet. This coin is available separately. 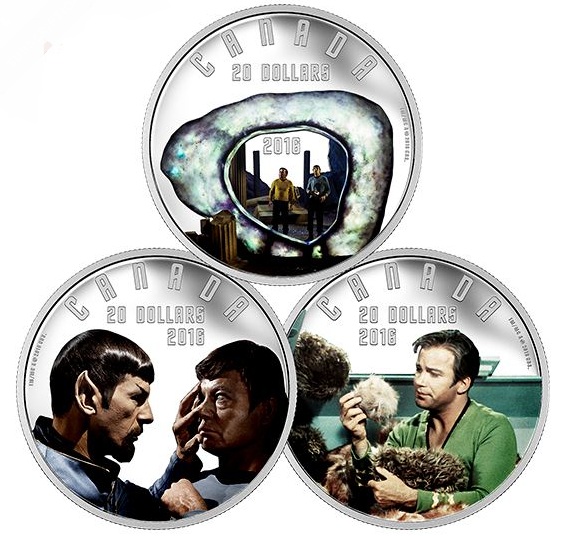 The $20 denominated series includes a total of three coins. Beginning with “City on the Edge of Forever” from 1967, each scene from a memorable episode is rendered in bold color over an engraved surface. The first coin features Captain Kirk and Mr. Spock standing among the ruins before the towering, ring-shaped entity known as “The Guardian of Forever.” This coin is available as of August 2, with the two remaining coins scheduled as follows: “Mirror Mirror” (issued from September 6) and “The Trouble with Tribbles” (issued from October 4) This subscription is available to Canadian and U.S. destinations only. 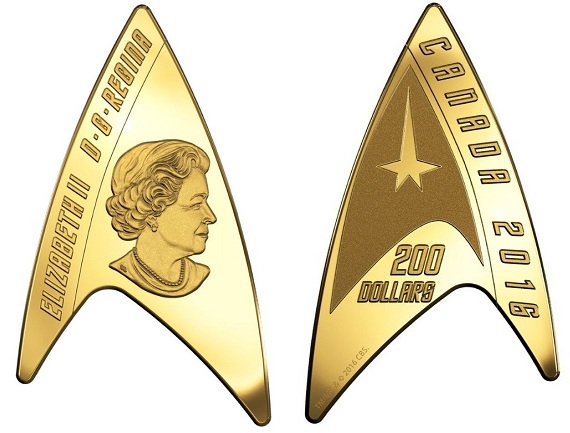 The gold $200 is crafted as one of the most cherished and recognized emblems of Star Trek. The Delta Shield insignia is the world’s first delta-shaped coin and reflects the gold tone of the original series’ insignia. The coin will be available from September 6th.

For more information on the Star Trek series and other coins offered by the Royal Canadian Mint, please visit their Web site. International orders are dispatched where applicable.