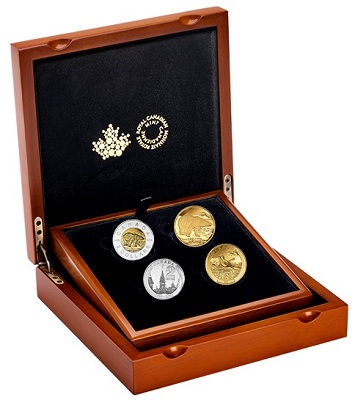 The Royal Canadian Mint has launched a new set of coins celebrating the 20th anniversary of one of the country’s most well-known and admired coins: the bi-metallic $2 “Toonie.”

Following the Mint’s successful introduction of a circulating one-dollar coin in 1987, it took on the task of producing a higher denomination two-dollar coin in an effort to remove the bank note of the same value — thus saving the Treasury substantial savings long term. Canada’s one-dollar coin, with its now-instantly recognizable depiction of the Common Loon, almost immediately earned the nickname, “loonie.” It would be another nine years before the debut of the two-dollar coin, which included innovative security features and highlighted another iconic Canadian symbol of wildlife — the Polar bear — in a reverse design rendered by Canadian nature artist Brent Townsend.

The bi-metallic coin, with an aluminium center disc and an outer cupro-nickel ring, was officially released into circulation on February 19, 1996, with the specific intention of replacing the two-dollar bank note as the “loonie” had done in 1987. With 375 million new “toonies” on hand, the coin quickly saw wide circulation and overall public acceptance. The coin’s nick-name of “toonie” was so commonly used as a reference for the coin that in 2006 the Royal Canadian Mint registered this word as a trademark in order to secure all rights to its use.

For the coin’s 10th anniversary, a fun-spirited competition was launched to name the polar bear that appears on the reverse. The name “Churchill” emerged as the winner, as a nod to both former British Prime Minister Winston Churchill and to the common polar bear sightings reported in Churchill, Manitoba.

The Royal Canadian reports that, since the toonie’s introduction twenty years ago, a total of 882 million pieces have been produced, with a total of nine commemorative designs appearing on the reverse.

The new collector’s anniversary coin set includes two gold and two platinum coins, as well as an uncut sheet of 40 previously-issued two-dollar bank notes from the “Birds of Canada” series.

First coin: The reverse and obverse of this two-dollar coin feature the design of the current circulating issue. The inner ring of the obverse and reverse are gold-plated. The obverse features the present effigy of Her Majesty Queen Elizabeth II as created by Susanna Blunt. 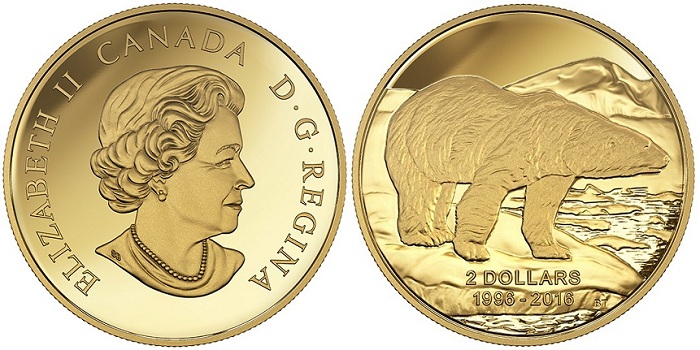 Second coin: The reverse of this two-dollar coin shows a magnified view of the original polar bear from the 1996 issue, with the polar bear sitting center stage. The obverse features the present effigy of Her Majesty Queen Elizabeth II created by Susanna Blunt.

Third coin: The reverse of this two-dollar coin features the number “2” and the Parliament buildings of Canada from the Canadian two-dollar bank note. Ornate scroll-work and geometric lines are captured from the bank note design. The obverse features the 1996 effigy of Her Majesty Queen Elizabeth II by Dora de Pédery-Hunt. 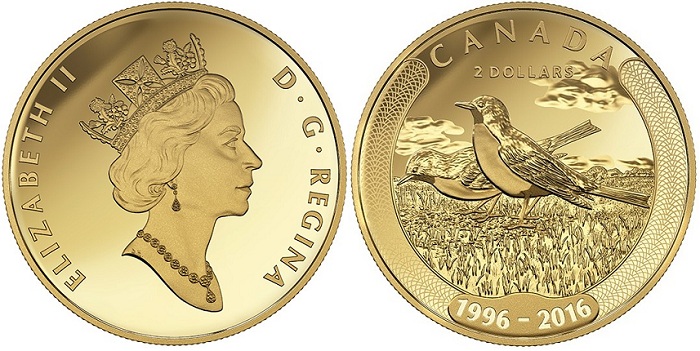 Fourth coin: The reverse of this two-dollar coin features a detailed vignette depicting two robins from the Canadian two-dollar bank note issue. Ornate scroll-work and geometric lines are captured from the bank note design. The obverse features the 1996 effigy of Her Majesty Queen Elizabeth II by Dora de Pédery-Hunt. 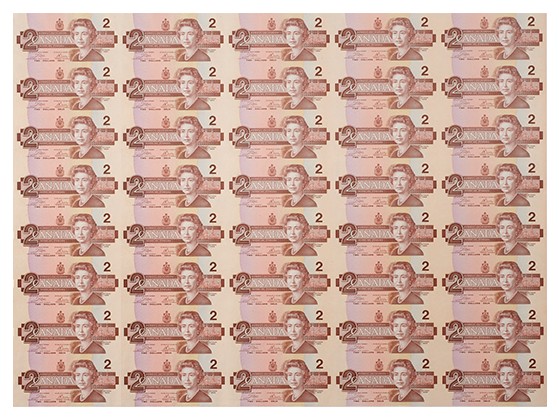 This sheet is composed of 40 unique ‘replacement’ notes, with the prefix BRX in the serial number, and has been held in the Royal Canadian Mint vaults for 20 years. The $2 bank note sheet is protected with Mylar sheets and packaged in a three-foot tube. The bank note sheet will be shipped along with the coin set in a large box. You are encouraged to store the bank note sheet in a manner free from PVC, humidity, and sunlight to help maintain its condition.

The four coins in this set are encapsulated and presented in a Royal Canadian Mint-branded wood case with protective sleeve box. For more information on this and other products offered by the Royal Canadian Mint, please visit its Web site. Available to destinations in Canada and the USA only.