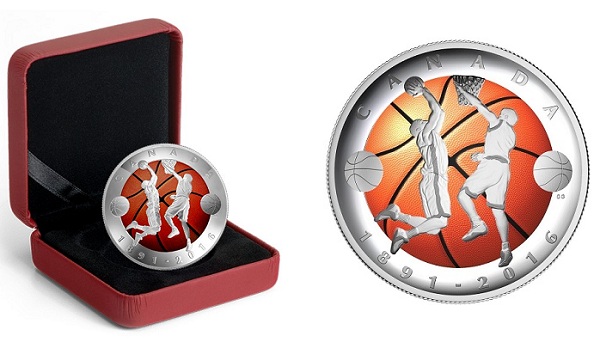 The Royal Canadian Mint has issued a new coin celebrating one of the world’s most popular team sports: basketball. Over the last 125 years, professional basketball has become a multi-billion-dollar industry with sponsorships, televised coverage, and events that bring the sport to an ever-growing audience.

Annual basketball championships are held by a number of international organizations, including the N.B.A. or National Basketball Association, the F.I.B.A. or Federation of International Basketball Associations (for teams within the Americas but outside the U.S.), and “EURObasket,” which is the main international basketball competition held bi-annually by the men’s national teams governed by F.I.B.A. Europe. Women’s basketball has also developed in tandem with its men’s counterpart. The main North American league is the W.N.B.A., while the F.I.B.A. Women’s Basketball World Cup features the top national teams from European continental championships. Basketball was first demonstrated internationally in the 1904 Summer Olympics and again at the 1924 games, and have been a consistent part of the Summer Olympic program since 1936.

The game’s objective is simple: Two teams of five players compete to shoot a ball through a hoop 18 inches (46 centimeters) in diameter and 10 feet (3.04 meters) high, mounted to a backboard at each end of the rectangular playing court.

The origins of basketball can be traced to a Canadian, Dr. James Naismith, originally from Almonte, Ontario. He was a physical education professor and instructor at the International Young Men’s Christian Association (Y.M.C.A.) Training School in Springfield Massachusetts. Trying to keep his gym class active on a rainy day, he sought a vigorous indoor game to keep his students occupied whilst maintaining proper levels of fitness during the long New England winters. 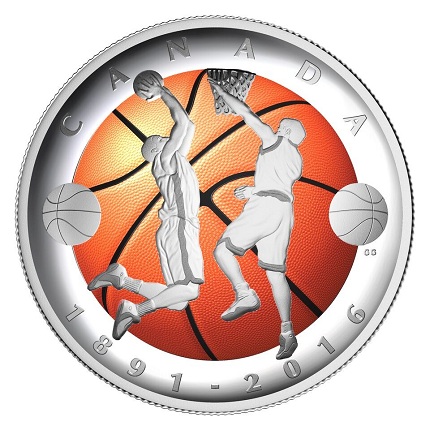 The game had to be suited to walled-in gymnasiums and he wrote the basic rules and nailed a peach basket onto a 10-foot elevated track. While modern basketball nets allow the ball to pass through, the peach basket retained its bottom and balls had to be retrieved manually after each “basket,” or point scored. The method proved inefficient and bothersome; as a result, the bottom of the basket was eventually removed, allowing the balls to be poked out with a long rod each time. This was still not as efficient or trouble-free as a net, but it marked an improvement on the previous scenario.

The bothersome peach baskets weren’t replaced until 1906, when metal hoops with backboards finally became part of the standard equipment. Another innovation involved the ball itself, as basketball was originally played with a soccer ball. The first balls made specifically for basketball were brown, and it wasn’t until the late 1950s that Tony Hinkle, an American basketball player and eventually a coach, sought a ball that would be more visible to players and spectators alike.

Hinkle introduced the orange ball that is now in common use, and as manufacturing and ball shape improved so did the concept of “dribbling,” the practice of bouncing the ball during a player’s movement and passes, which contributed to the excitement of the modern game. The familiar “dimples” on a basketball were introduced to provide players with a better grip on the ball and to provide greater traction on the smooth playing surface of polished wood. Today, basketball has evolved to become one of the most popular sports played around the world, by people of all ages. 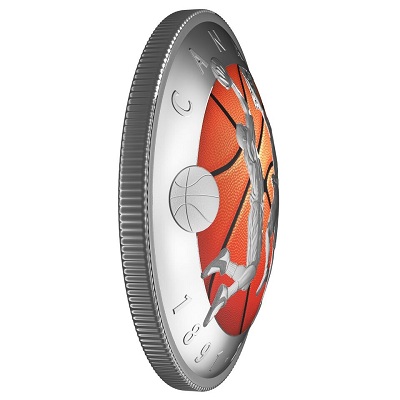 The coin is designed by Canadian artist Glen Green and is produced utilizing a convex/concave method with a vivid color application, resulting in the world’s first-ever convex color coin. The coin’s deeply convex curvature recreates the rounded shape of a basketball. In addition to the engineering complexity of the coin’s unusual shape, precision engraving replicates the tactile elements famously associated with the basketball, including the recessed lines and dimpled surface, while the application of color mimics its orange appearance.

In the foreground, an engraved action shot portrays the fast-paced intensity of the game. The player on the left leaps towards the net as he goes for a dunk shot, while the player on the right moves quickly to defend the shot with his outstretched arm. On both sides, two engraved basketballs overlap the wide band that frames the reverse image, where the word CANADA is engraved above the commemorative dates, 1891-2016, which mark basketball’s 125th anniversary. 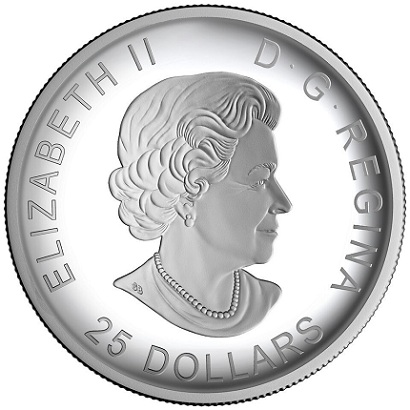 As the reverse of the coin is convex, the obverse is concave and includes Susanna Blunt’s effigy of HM Queen Elizabeth II. This design has been used on all Canadian circulation coins and many commemorative issues since 2003.

The basketball coin is encapsulated and presented in a Royal Canadian Mint-branded maroon clamshell case with a protective outer sleeve printed box, and is available in Royal Canadian Mint retail outlets. For more information on this and other coins offered, please visit their Web site. International sales will dispatched where applicable.