On September 29, the Royal Canadian Mint officially unveiled a new coin that honors the 75th anniversary of one of the Second World War’s poignant battles in the Asian theater of operations—a battle that had a pivotal result for Allied forces.

The Japanese attack on Hong Kong took place on December 8 (Hong Kong local time), the same day as the attack on Pearl Harbor (December 7, Hawaii local time). British, Hong Kong, Canadian, and Indian forces attempted to defend the Crown colony from the invasion, which, as Japan had not declared war on the British or their forces, was seen as a violation of international law. Of the 1,975 Canadian soldiers, 293 were killed or died in prison camps, and 493 were wounded in action. For more than three and a half years, British and Canadian POWs were imprisoned in Hong Kong and Japan in the most inhumane conditions and had to endure brutal treatment and near-starvation until their liberation by American and Australian forces in August 1945. (For more about the battle itself, scroll down.) 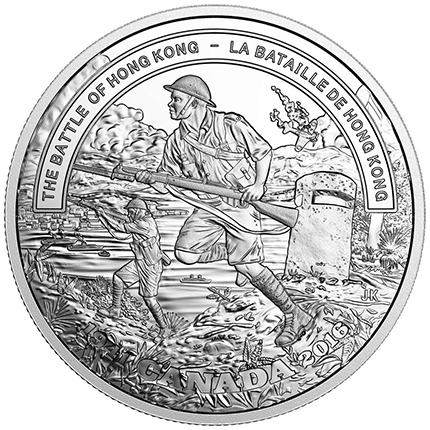 The coin’s reverse, designed by Canadian artist Joel Kimmel, includes a depiction of two Canadian soldiers among the Allied forces that formed a line of defense to counter the enemy’s advance toward the Wong Nai Chung Gap. The soldier in the foreground is dressed in the shorts and short sleeves of the Pacific uniform; rushing forward with resolve and courage, he makes his way past a concrete pillbox that bears the marks of heavy artillery fire. The overwhelming nature of the Japanese attack is also conveyed through the ships that fill the bay between the island and the mountainous mainland in the background. 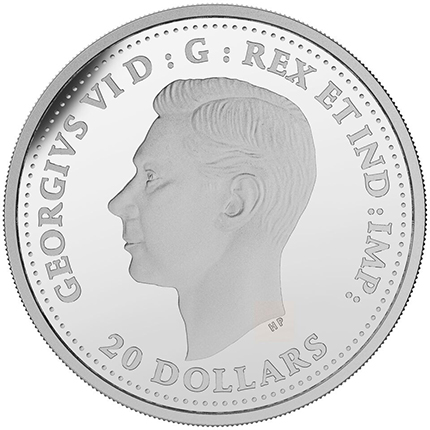 The obverse includes the effigy of HM King George VI, Canada’s head of state during the Second World War. The portrait of the King was designed by famed Royal Mint artist Thomas Humphrey Paget and depicts the legend that denotes the King as Emperor of India, a title he assumed until India’s independence in 1948.

To honor the soldiers of the Winnipeg Grenadiers and the Royal Rifles of Canada who valiantly fought to defend Hong Kong from enemy invasion in December 1941, the coin was unveiled before veterans of the Battle of Hong Kong and guests at the Legislative Assembly of Manitoba. The launch of the coin was especially poignant for the Royal Canadian Mint, since George Peterson, the veteran who took part in the unveiling, is also a retired employee of the RCM’s Winnipeg facility at their vault.

The coin is the second issued in an overall series that remembers or commemorates the 75th anniversaries of key battles during the Second World War, 1940 to 1945. The first coin, issued in 2015, remembered the 75th anniversary of the Battle of Britain, which occurred in 1940.

For more information on this and other coins offered by the Royal Canadian Mint, please visit their website. The coin can be ordered as of October 4 and is not available in the RCM retail outlets. 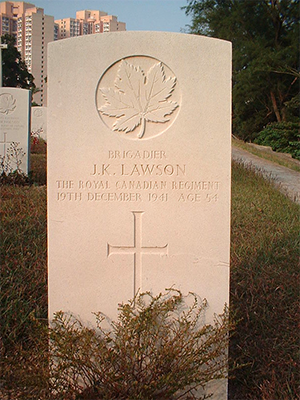 The Battle of Hong Kong

On December 7, 1941, the Imperial Japanese Navy and elements of their air force were attempting to entirely disable the United States fleet stationed in Pearl Harbor, Hawaii, by launching what the world would regard as a sneak attack. They were also mounting an attack against the Crown colony of Hong Kong.

Only six weeks earlier, Royal Canadian soldiers had arrived at the request of British command to serve as reinforcement to the small colony in southern China. When the attack occurred on the morning of December 8, just hours after the stinging attack commenced in Hawaii, British, Canadian, and local Hong Kong defense forces were met by three Japanese regiments who had not expected such resistance to their attack.

The battle lasted a total of 17 days, during which the Allied forces saw gains and losses; but by December 25, it was evident to the commanding officers of the colonial forces that resistance would no longer be sustainable. On that afternoon, the government of the British Crown colony, headed by the governor himself, surrendered to what was to become occupying Japanese forces and administration. The surrender was accepted by the Japanese commanders, who had made their headquarters at the Peninsula Hotel on Kowloon Bay. This was the first instance where a British colony had surrendered to hostile forces. The event, which fell on Christmas Day, is still remembered and commemorated as the “Black Christmas.”

The forces who stood their ground for those 17 days are remembered for having fought heroically in the face of greater numbers, and for having endured instances of torture and ill-treatment (which was in contradiction to the Geneva Convention rules set out to ensure humane treatment of prisoners of war). The abuse of these rules was one of the specific reasons outlined to Japanese forces when colonial commanders decided to surrender, hoping to end these deplorable conditions. Despite a fighting force of 15,000 well-trained and equipped soldiers, commanders had grossly underestimated the numbers and abilities of the Japanese army as well as their resolve to take the colony.

For Canadians, the loss of Brigadier John Kelburne Lawson (1886–1941) was an additional blow to morale. Lawson was the most senior Canadian officer in the Battle of Hong Kong, and commander of the West Brigade. He was also the highest-ranking Canadian officer to be killed in action in the Second World War.

For more on the historic Battle of Hong Kong, Veterans Affairs Canada has an excellent essay, with photos, located here.
Share: