The statistics of human trafficking are staggering, it affects the smallest village, town, and big city, and no continent is exempt. The figures are growing in terms of the number of women and men becoming victims of this horrific practice. But what can one person or group do to help combat this intolerable situation which still exists in the 21st century?

In the world of numismatics, an unusual and innovative approach is being launched by the United Future World Currency (UFWC) the global currency initiative which came to the forefront of international media attention during the G8 summit in L’Aquila, Italy in 2009. Wanting to do their part to help combat human trafficking and modern day slavery, the UFWC have produced a prototype coin that carries the message of ending human trafficking prominently depicted on the obverse. The contemporary design carries the message “BREAK THE CHAINS OF BONDAGE” a direct reference to the intolerable circumstances. 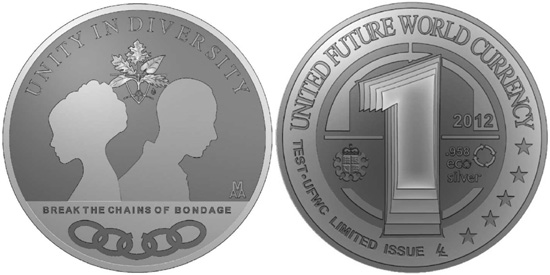 Inspired by the Freedom Project, a year-long campaign launched by CNN international in 2011, the UFWC have developed this eye-opening campaign to be part of their world-wide initiative. Their prototype coin, the first of its kind to include this socially responsible message will be launched at the World Money Fair, Europe’s largest coin exhibition on the 3rd February in Berlin, Germany. As part of their unique approach to spreading this message, a challenge or invitation during the coin’s launch will be extended to attending world Mints at the WMF, inviting them to issue a legal tender circulating/collector coin with the message of ending human trafficking & modern-day slavery.

The coin is being struck at the world renowned Royal Mint UK in eco-silver, (a product developed by Cookson Precious Metals UK) a responsibly sourced product from a dedicated line of recycled silver, thus eliminating the need for further mining activities which are harmful to the environment. The specially commissioned design includes the silhouette images of a man and woman back to back with a broken chain of five links below them and the UFWC’s insignia above them both.

The idea behind the concept of the coin is to additionally focus attention on the monetary link & ill-gotten gain to the scourge of human trafficking and to prompt world Mints & Central Banks to carry the message on a legal tender coin. It is hoped that this project will result in an international campaign which will carry into 2013 and beyond, conveying this vital message in the most direct manner, far and wide to all members of the public and compelling everyone to take a stand! Ultimately, we hope the coin will speak for those who can’t.

For more information on this innovative project, for images of the prototype coin or to speak to the organizers of the UFWC about this initiative, please contact Firsthand PR at or at: +44 90) 791 352 2565