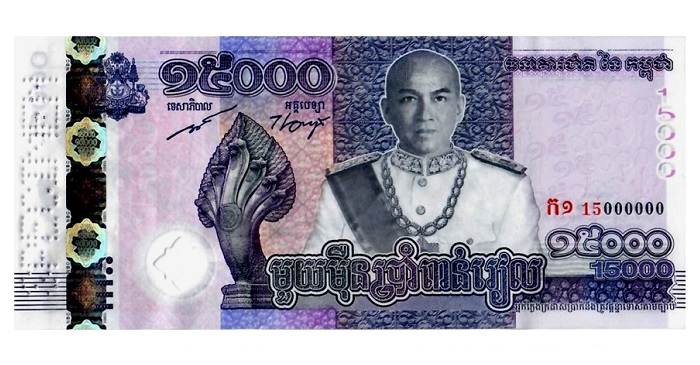 The National Bank of Cambodia has released (7th October) new commemorative banknotes of 15,000 riels (U.S. $3.75) in celebration of the 15th anniversary of the coronation of HM King Norodom Sihamoni, which took place on the 29th October 2004. His Majesty succeeded his father King Norodom Sihanouk, who abdicated on the 7th October that same year due to ill health. As with most kingdoms, the succession is generally in place, which means the next monarch would have the title of crown prince or princess. However, the Cambodian throne relies on a nine-member council known as the Royal Council of the Throne, who will debate the succession and consider the members of the royal family qualified to sit on the Cambodian throne. On the 14th October, the council chose the eldest son of King Norodom and Queen-Consort Monileth. Prince Sihamoni was born on the 14th May 1953. His given name, Sihamoni, is unusual even in Cambodia as it comprises two morphemes from his parent’s given names, Sihanouk and Monineath.

Due to the political instabilities in Cambodia, the young prince spent most of his life outside Cambodia. As a child, Sihamoni was sent to Prague, in former Czechoslovakia, in 1962. During the 1970 coup d’état by Lon Nol, Sihamoni remained in Czechoslovakia, where he attended all three levels of education. Prince Sihamoni also studied at the Academy of Performing Arts in Prague where he studied classical dance and music almost continuously until 1975 to graduation. As he spent virtually his entire childhood and youth in Prague, the Cambodian king has the distinction as being the world’s only crowned head of state who is fluent in the Czech language. He is also fluent in French, and a conversational speaker of English and Russian. In 1977, Prince Sihamoni returned to Cambodia, but almost immediately, the ruling Khmer Rouge government turned against the monarchy and the royal family, including Sihamoni, who were placed under house arrest until the 1979 Vietnamese invasion. During the genocidal regime of Democratic Kampuchea from 1975 to 1979 and the People’s Republic of Kampuchea from 1979 until 1993, much of the royal family managed to escape and take refuge in other countries. By 1981, having fled his homeland, Prince Sihamoni moved to France and took a job teaching ballet, and where he later became president of the Khmer Dance Association. He made his home in France for nearly 20 years, regularly visiting Prague, where he had spent his childhood and youth.

The Paris Peace Agreements, or Comprehensive Cambodian Peace Agreements, were signed on the 23rd October 1991, which saw the eventual return of Prince Sihamoni’s father to the former Cambodian throne as king in September 1993. Upon the announcement that King Norodom Sihanouk wished to abdicate due to poor health, the Royal Council of the Throne chose the eldest, and, since 2003, only son of the king and his consort Queen Monileth, as his successor. 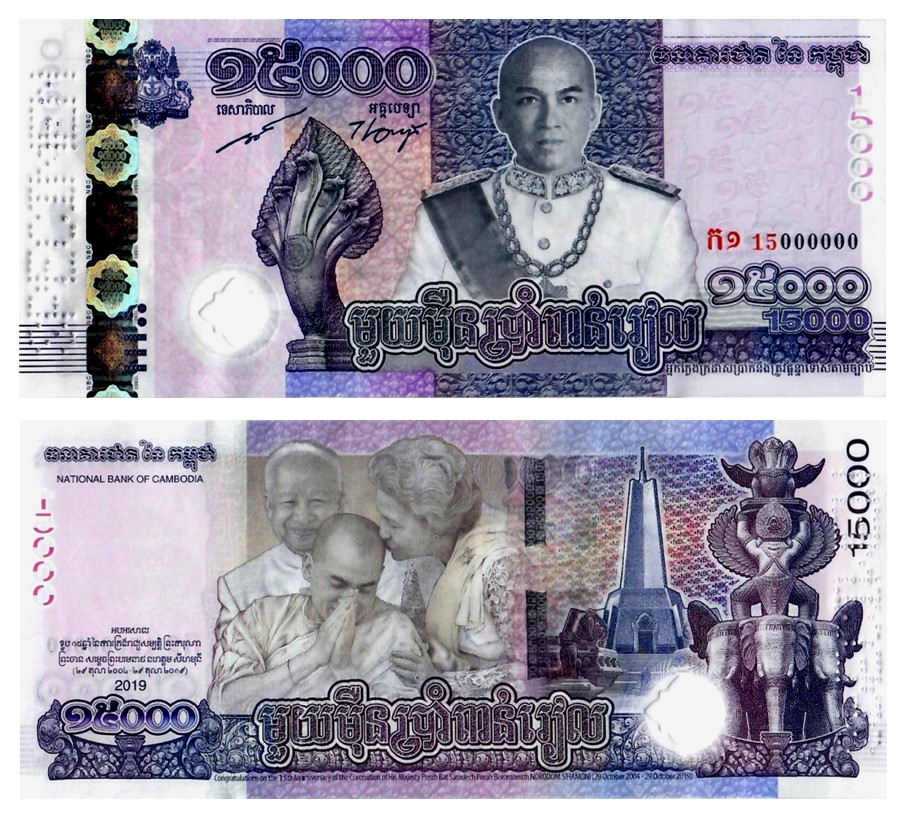 The 15,000-riel banknotes, which are printed on a polymer substrate, are predominantly lavender in colour and include a front-facing portrait of the king, which is also the official state portrait usually seen in municipal buildings. The back includes a touching photograph of the king along with his parents taken shortly after receiving the blessing as king of Cambodia. This image is also included on the back of the current 100,000-rial banknote issued from 2012. A commemorative inscription in Cambodian is placed just below the watermark field which reads “Congratulations on the 15th Anniversary of the Coronation of His Majesty Preah Bat Samdech Preah Boromneth NORODOM SIHAMONI 29 October 2004 – 29 October 2019.”

The banknotes are issued with the intent of circulation alongside the current series of Cambodian riel banknotes ranging from 100,000 to 100 riels. For additional information about Cambodian currency, please visit the website of the National Bank of Cambodia.