The United States Mint has started accepting orders for an array of 2014 Calvin Coolidge Presidential Dollar products. The circulating quality coins struck at the Philadelphia and Denver Mint facilities are available in roll, bag, and box quantities. This represents the second release of the year and the thirtieth release overall for the Presidential $1 Coin Program. 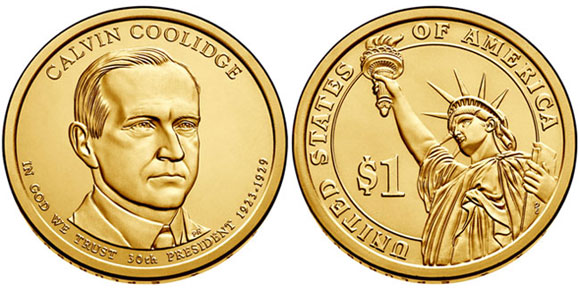 The obverse design of the coin features a portrait of President Coolidge designed and engraved by Phebe Hemphill. The required inscriptions appear surrounding with the portrait and include the President’s name, order of the Presidency, dates served, and the motto “In God We Trust”. The reverse, which was designed and engraved by Don Everhart, includes an image of the Statue of Liberty with the inscriptions “United States of America” and “$1”. The date, mint mark, and motto “E Pluribus Unum” appear as incused lettering on the edge of the coin.

The circulating quality Calvin Coolidge Presidential Dollars are available across three different packaging options, with coins form either the Philadelphia or Denver Mint. There are 25-coin rolls priced at $32.95 each, 100-coin bags priced at $111.95 each, and 250-coin boxes priced at $275.95 each. The wrappers for the rolls or tags affixed to the bags indicate the President’s name, the mint mark of the coins, and the face value of the contents.

There are no household ordering limits imposed for the products. Customer demand will determine the number of coins minted.

The Calvin Coolidge Dollars are not being released for general circulation, but will only be available within these and other numismatic products offered by the United States Mint. In late 2011, the Treasury Department suspended production of Presidential Dollars for circulation due to a large build up of $1 coins held in storage at Federal Reserve Banks.